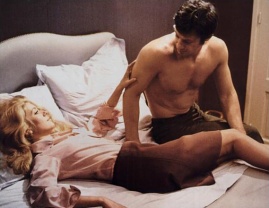 Mississippi Mermaid is a rich and tropical amalgam of the post-war French fascination with the great American tradition of gritty urban thrillers and Francois Truffaut’s growing yearnings for settings more and more dystopian and exotic. Viewed today, the film remains a fascinating exploration of the major themes essayed by movie melodramas of betrayal – a sort of distillation of the amoral nucleus of Double Indemnity (Billy Wilder, 1944) and the wilder settings of Key Largo (John Huston, 1948). Then there’s the added star presence of those great faces of the New Wave: Jean-Paul Belmondo, still carrying the cinematic baggage of his Bogey-obsessed and murderous madcap in À bout de souffle/Breathless (Jean-Luc Godard, 1960), and Catherine Deneuve who would soon become the model for Marianne – the face that represents France for each new generation. It’s a heady, steamy brew!

Out of the ashes of World War II came many cultural hopes and responses but for film theory and criticism the influence of Les Cahiers du cinéma and Positif has proven amazingly long-lasting. Godard, Truffaut and Chabrol all turned their minds towards an American cinema that they felt had a certain purity and, arguably in the equally powerful grip of post-war Existentialism, and increasingly drew upon the crime fiction writings of David Goodis and Cornell Woolrich, and critically ignored B-movies: both artistic fields offering visions of a world without much hope of redemption.

The universe of film noir, and its literary parent, the dime novel, was bleak. It spoke of men and the women who fell for them – or the reverse – in the grip of false and absurd hopes of that big heist, an easy murder or two, or a big life insurance policy pay out. These are stories of men and women who kill and lie compulsively, almost always coming to a sudden and very nasty end.

In Europe, and especially in France, such existential themes seemed ideal for an intellectual environment where the sour memories of collaboration with the occupying German forces and evidence of what Jean-Paul Sartre called “Bad Faith” was almost everywhere. The young critics of Les Cahiers du Cinéma would soon start making movies themselves and their “ground zero” was the American crime novel and film noir (as they called the generally low budget mainstream and B-movie imports that seemed, to a bruised French artistic consciousness, to sum up a world gone dark in so many ways).

Perhaps Mississippi Mermaid is not the finest film by Truffaut, but it does capture the true feeling of classic noir and puts it into a setting that is no longer urban but ripe, lush, rotting and tropical. Given the dark fates that are always hovering to snatch the optimistic and foolish in such tales, the decaying colonial setting of Reunion seems to express the dark spirit and angst of 20th century noir perfectly (1). But although Truffaut based his film on a novel (Waltz into Darkness) by that extraordinarily prolific and influential crime writer, Cornell Woolrich, he moved the locations – and the plot – to a place far away from Woolrich’s city primeval (2).

Belmondo plays Louis Mahe, a lonely tobacco farmer living on the African island of Reunion. Deneuve is Julie Roussel (or at least that’s what she calls herself), his mail-order bride, who arrives on a French ocean liner (called the Mississippi) and surprises him because she looks nothing like the photographs she had sent. Belmondo naturally falls in love with her and from this point on the film becomes classic noir. Shortly after, Julie disappears with most of Louis’ money and it becomes apparent that she is a grifter. Vengeful and still half in love (or more?), Louis hires a private eye to hunt down his wife.

Within a few weeks of his return to France, Louis meets up with Julie in Nice but, aware that the police suspect his wife of killing the real Julie Roussel, Louis is now prepared to do anything to protect her. But does Julie (a.k.a. Marion) have any love for him – or is she still only interested in his dough?

The film was critically bullied when it was released outside France. But it’s actually much better than many critics could admit to and fits well into an honourable tradition that Truffaut justifiably felt himself to be part of. Indeed, by dedicating the film to Jean Renoir, Truffaut was acknowledging his debt to a director he greatly admired but who had also became a personal friend. The film begins with a brief excerpt from Renoir’s historical epic, La Marseillaise (1937), and a poster of Renoir’s most recent film Le Caporal épinglé (1962) is visible in one scene. It’s almost the stuff of fandom and typical of Truffaut’s fearlessness when it came to showing the intimate, the personal.

Mississippi Mermaid was released in the United States with 13 minutes missing, a classic case of a film being diminished by over keen cutting for international exhibition. Now restored, those scenes give the film a clarity it lacked before and flesh out the characters in ways that justify their actions.

Truffaut tells his story with great panache and uses voiceover, drifting dialogue and snappy editing to maintain the tension. He also uses the Reunion locations brilliantly (well served by cinematographer Denys Clerval). It’s all great fun, an action movie with a dark vein of pessimism and shot through with Truffaut’s signature visual, often throwaway humour (3).