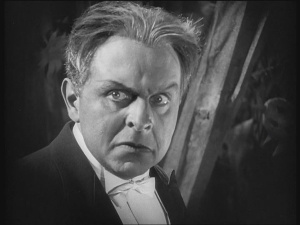 In her analysis of Lang’s films, Janet Bergstrom argues that “we find an abstract use of characters as types with almost no attention to ‘depth’ or ‘development’” (1). Her understanding of Lang’s characters can most clearly be seen in the opening scenes of Dr. Mabuse, der Spieler. Mabuse sorts through a variety of cards to select a character to impersonate. In fact, as we can observe in the word “spieler” (that is a gambler or actor), Dr. Mabuse (Rudolf Klein-Rogge) succeeds because he manipulates skillfully any persona he wishes to adopt. He is not just a master gambler; he is an extraordinary actor who survives by not allowing anyone to see his interior and emotional depths. Herein resides his power; he exists in a realm both within and beyond time – a motif that is highlighted by Lang’s use of timepieces, for example. This sense of Dr. Mabuse existing between realms is continually reinforced by the film’s characters, who never know precisely the identity of Mabuse even though they have been victimised by his actions. Thus, Lang’s Dr. Mabuse, der Spieler serves as a powerful examination of the nature of the modern human condition.

Tom Gunning points out that Lang believed the purpose of film was “to provide a record of contemporary times” (2). Lang’s sense of film’s purpose is underscored throughout the opening acts of Dr. Mabuse, der Spieler.  For instance, the volatility of the stock market during the Weimar Republic serves as one device to divulge Mabuse’s criminal genius. In the opening sequence of the film, Lang juxtaposes several elements: Mabuse preparing an identity; Mabuse’s henchmen robbing a courier; and images of timepieces. Lang reveals the significance of the courier sequence through a close-up of the briefcase followed by a dissolve that divulges its contents – important contracts.  In wonderfully timed progressions, we see the successful theft of the briefcase, and then we observe Mabuse standing above the chaos of the stock market like a puppet-master. These scenes represent the runaway markets of post-war Germany and the exploitation they allowed, while also illustrating Lang’s belief that film should show the reality of its historical moment.

Playing the stock market is not the only form of gambling Mabuse enjoys, of course. At various points, Lang also highlights the theatricality of gambling dens and music-halls. At the Folies Bergère, Edgar Hull (Paul Richter) and Cara Carozza (the dancer played by Aud Egede Nissen) both come under Mabuse’s power. At the Folies, we first see the mystic power of Mabuse’s gaze. As Carozza dances, she is intently watched by Hull who is unaware of the Doctor’s gaze upon him. Carozza’s costume is stripped off her in much the same way as Hull’s self-control is stripped from him by Mabuse. Hull leaves the Folies complaining of a headache, which viewers understand has been brought on by the power of Mabuse’s intense stare. In the hall behind a loge, Mabuse catches Hull and accompanies him to a club where Hull loses a small fortune gambling with Mabuse. Just as he did in the stock market, Mabuse controls Hull like a puppet-master. It is only after Mabuse has left and Hull comes out from under a hypnotic spell that he realises he has been tricked.

The episode with Hull highlights the incredible nature of Mabuse’s power, and thereby, illustrates the film’s relationship to the senstationalist 19th century detective novel. Mabuse seems most closely associated with Count Fosco of Wilkie Collins’ The Woman in White. Count Fosco controls everything and everyone who comes within his power. While Fosco uses drug compounds to maintain his control, Mabuse relies solely on the power of his gaze. Even Carozza, who Mabuse sends to seduce Hull, feels the power of his eyes. When she meets him in the hallway by his rooms, he dismisses her and sends her to Hull. Carozza’s response shows her complete submission to Mabuse and highlights his power.

When Carozza is in Hull’s sumptuous apartment and sees Inspector von Wenk’s card, she warns Hull to be careful not to get involved. It is a delightfully ironic moment, as viewers know that Hull should be careful of Carozza and her association with Mabuse. Nonetheless, the scene in Hull’s apartment serves to introduce von Wenk, the one character who manages to resist Mabuse. Von Wenk’s power to withstand Mabuse becomes apparent in the Andalusia gambling den. Von Wenk, also a master of disguise, enters into a game with Mabuse. Since von Wenk, like the other characters, does not know what Mabuse actually looks like, he has to attract his quarry with large amounts of cash. Mabuse distracts von Wenk with a pair of glasses. As Mabuse hypnotises von Wenk, Lang reinforces the power of Mabuse’s gaze by focusing on his face – making him like one of the cards seen at the beginning of the film. The words “Tsi-Nan-Fu” reveal the power of Mabuse’s gaze since von Wenk’s struggle to overcome their appearance demonstrates his effort to break Mabuse’s power. Lang’s use of shot/reverse shot editing here draws the viewer into the struggle of wills until Wenk finally breaks Mabuse’s influence.

The scene between Mabuse and von Wenk, then, becomes the heart of the film. Unlike other characters such as Countess Told, Edgar Hull, Cara Carozza, and the Russian Countess, Wenk represents a force that can address the decadence that Mabuse personifies, a decadence that stands in for broader conceptions of the Weimar Republic. Von Wenk’s ability to resist Mabuse’s domination, therefore, relates to Mabuse’s inability to control his fate at the end of the film. Like his earlier victims, Mabuse must represent the powerlessness of people caught up in forces beyond their control. What seems to be overarching power becomes an all-consuming trap.

Dr. Mabuse, der Spieler testifies to the power of Lang’s vision as a filmmaker. By focusing on the chaos of the 1920s, Lang creates a tale that addresses the problem of all societies facing breakdown. Ironically, Lang’s desire to portray the modern moment takes on mythic qualities, even as the belief in myth may be deteriorating. The importance of Dr. Mabuse, der Spieler relates to both Lang’s understanding of societies in anarchy as well as his recognition of the human contribution to that disorder.