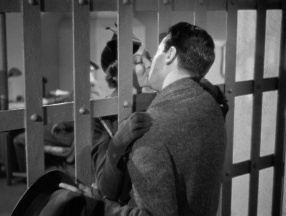 Fritz Lang’s second American film, You Only Live Once, starring Henry Fonda and Sylvia Sidney, is marked by all the heights and curves of the famous Austrian’s directorial signature.

An anti-heroic male protagonist, Eddie Taylor (Fonda), is victimised by the injustice that haunts his morally flawed community. While trying to lead a normal married life with his devoted wife Joan (Sidney), the cycle of violence that pollutes their world consumes them, and neither Eddie nor Joan can escape it. Lang’s infatuation with the perils of mob psychology, his clever depictions of mass media and how it implicates innocent souls, as well as his outstanding pacing, lead to what can be considered another of Lang’s under-appreciated classics. You Only Live Once also highlights his stellar visual storytelling skills, illustrating the craftsmanship of a great silent film director who successfully transitioned into the world of sound.

It’s difficult to think of Lang or You Only Live Once without thinking of film noir. The film includes references to violence that were unusual for 1937: Eddie says, cavalierly, that a fellow prisoner “carved up an acrobat” caught fooling around with his wife; a sadistic tale about tortured frogs proves pivotal in Eddie’s upbringing; and a priest is murdered needlessly. In fact, 15 minutes of footage was deleted from the film due to its excessive violence. As with many noirs, the nightmare of war explodes on American streets, as bank robbers use tear gas, machine guns, and grenades to sack an armoured car. In the fog, the bank robber, with his gas mask and stealthy movements, resembles a monster, a common conception of the organised criminal in 30s and 40s America.

Lang’s expressionistic touches also appear throughout, most notably in the striking scene where Eddie waits in his cell for his execution. The fog and night scenes equally recall Lang’s German expressionist work. Paranoia also pinches everyone’s nerves. For example, the hotel caretaker is immediately suspicious of Eddie, and when his wife accuses him of reading too many detective novels, he replies, “I have a right to be suspicious”. Eddie meanwhile becomes more than paranoid; he knows the cops think he committed the bank robbery, and throughout the film believes his fate has already been determined.

“A three-time loser”, Eddie is right and society is wrong. While leaving jail, Eddie declares he’ll do what’s right, “if they let me”, but he knows the power of They. Throughout the film, Eddie is on the outside looking in both visually and narratively, never erasing the stigma of being an ex-convict. While leaving prison, Lang foreshadows Eddie’s challenge: an inmate reminds Eddie that he’s still “one of the boys”. Later, when Joan and he settle at a bed and breakfast after their wedding, the caretaker says, “ex-convicts and their wives aren’t welcomed in this hotel”. Eddie is later fired from his first post-prison job for tardiness and being a jailbird. He punches his boss and contemplates the foolishness of his plan “to go straight”. Even when he was a kid, society ruined him. He tells Joan a childhood tale about his buddies who killed frogs and cooked their legs; such cruelty “made him sick”, so he pummeled the kid who did the cooking, which initially landed him in reform school and later, in a gang.

As the film progresses, Eddie becomes a mouthpiece for society’s ills. Shuffling to jail a second time, he yells to the crowd, “It’s fun to see an innocent man die”, knowing some revel in others’ pain. Lang’s depiction of newspaper editors waiting to publish a front page featuring one of Eddie’s possible three verdicts, along with that of a newspaper boy peddling news for profit, highlight how the mass media is also implicated in this vicious cycle. What makes Eddie dangerous, though, is that he eventually realises society made him a criminal – and this conclusion is convincing. This is why he resorts to an “eye for an eye” approach to justice; they’ll execute me, so I’ll kill them, he thinks, and asks Joan for a gun. Compared to Joan’s naive beliefs in the American dream and the fairness of its legal system, Eddie’s rebellion is a potent and justifiable one.

You Only Live Once becomes Eddie’s existential odyssey, a journey that begins with him succumbing to the cruel, violent forces of society, but ends in his tacit decision to combat and transcend these forces. At one point, Eddie says, “The bottom’s dropped out of everything”, suggesting all that was stable has now been destroyed. The prison cook who says, “This is a fine world”, acknowledges these brutal forces himself when he describes the vicious cycle: we kill the chicken to feed Taylor; Taylor eats the chicken; and then we kill Taylor. Father Dolan (William Gargan) also understands this evil when he suggests that “the stain of the world” corrupts us. As Eddie and Joan’s journey ends, a voiceover states, “You’re free… the gates are open”. Dipping into Christian symbology, Lang offers this daunting proposition: What is Eddie, and by extension, what are we trying to escape? Is it society? Evil and violence themselves? The possibility or impossibility of love? Our sins? One’s social class? No easy answers are provided, which makes You Only Live Once a worthy exploration of our existential and spiritual cores.

Sidney’s portrayal of Joan has been sharply criticised because she is too accommodating, obsequious, and love-struck to warrant complex interpretation. However, she offers more than most leading ladies in such “lovers on the run” tales. Like the frogs Eddie and Joan scrutinise during their honeymoon, “they” and their love are inseparable. When one goes, the other goes too. Both eagerly want a simple, traditional lifestyle, but their desire for a deeper freedom that exceeds social independence prevails. As the secretary for a public defender, Joan is a natural lawyer and social activist, and her moral clarity is admirable, as is her loyalty to Eddie. However, she allows her boss, Stephen Whitney (Barton MacLane), to massage the system and compromises her ethics to save her beau and release him from prison. The saintly Joan is human too. Furthermore, once the couple hits the road, she commits criminal acts and makes dubious decisions.

Based loosely on the real-life criminal duo of Bonnie and Clyde, You Only Live Once established the template for the archetypal “lovers on the run” film. Its cinematic progeny includes provocative films such as Nicholas Ray’s They Live by Night (1949), Joseph H. Lewis’ Gun Crazy (1949), Arthur Penn’s Bonnie and Clyde (1967), Terrence Malick’s Badlands (1973), and Oliver Stone’s Natural Born Killers (1994), to name a few. However, the seminal You Only Live Once’s originality shines. The “on the run” portion of the film occupies only about 15 minutes; the film is more concerned with what the couple is running from than the running itself or what they’re running towards. Throughout the film, the couple is separated for various reasons, but as the film reaches its conclusion, and newspaper headlines and police pamphlets describe the couple as “Eddie & Joan Taylor”, they transform into one, and Joan consummates this union by stealing. She becomes Eddie and justifies her exodus from society by declaring, “We have a right to live”. Most strikingly, she gives birth to their child while on the road. However, by abandoning the infant and leaving it with her sister and Whitney, her separation is complete.

Amidst the corruption that plagues Eddie’s world, two men stand tall: Father Dolan and Stephen Whitney. Both are righteous men who do what’s right amidst confusion. Dolan, who represents institutionalised religion, is killed, but Whitney, who represents secular morality and law, remains standing with the couple’s baby. This is perhaps Lang’s most poignant point: since we only live once, our most enduring and powerful refuge, the one that can bring salvation, is not religion, but society itself. We can only rehabilitate ourselves, and justice must come from inside and not the outside. Since we only live once, we better get it right; although the gates may open, they usually open too late.