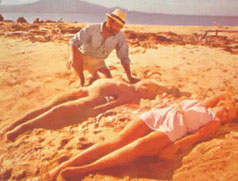 Age of Consent, Michael Powell’s final full-length feature, was the second film he made during his “exile” in Australia following the overwhelming negative reception to Peeping Tom (1960) in his native England. The first, They’re a Weird Mob (1966), was an amusing fish-out-of-water tale following the adventures of a bewildered Italian immigrant navigating the Australian landscape. They’re a Weird Mob proved to be a great success in Australia and New Zealand, while barely making a dent anywhere else. Age of Consent was based on a novel by Norman Lindsay, which Powell dismissed as “one of those girl Friday stories…. [He] had obviously written the book for money.” Powell’s account of the making of the film in Million Dollar Movie, the second volume of his memoirs, intimates the low regard Powell had for the material, devoting several paragraphs to “Godfrey”, the dog in the movie, whom Powell cheekily refers to as “the real star of the film”. Powell especially professes admiration for the dog’s neat trick of slipping in and out of his own collar to fool his owner that he has stayed in place all day (1). Powell’s offhand and dismissive comments about the film reflect its low status in Powell’s oeuvre. Most of the writing on Powell’s films mentions it only in passing, if at all. Age of Consent, while doing relatively well in Australia, was a critical and commercial failure everywhere else. The film is now mostly noted for being Powell’s (unintended) swan song, and for the presence of a very young Helen Mirren.

Age of Consent mostly represented an opportunity for Powell to work with James Mason, who was also a producer on the film. Mason had considerable control over the casting, pushing for Jack MacGowran to be cast as his overbearing and annoying friend, despite Powell’s skepticism. Powell’s ultimate lack of control over the finished product that screened outside Australia is perhaps another reason for this film’s negative critical reputation. The film was a victim of studio meddling. Columbia’s US and British release cut an early sex scene with James Mason and Clarissa Kaye, and replaced Peter Sculthorpe’s original score.

However, the film is now in the process of being fully restored to its original form, and had a recent screening in New York as part of a Powell retrospective at Lincoln Center. Removed from the context of the time of its production, it remains an interesting, if flawed, work with its own fascination. While it certainly doesn’t approach The Archers’ greatest films, it is still of interest for reasons other than being Powell’s last feature. Indeed, some of the themes of The Archers films are echoed in Age of Consent, and due to the presence of James Mason and the much younger Helen Mirren, connections can also be made to Lolita (Stanley Kubrick, 1962).

Much has been written on the primacy of colour in Powell’s films, especially in some of the more fantastical films of studio artifice such as Black Narcissus (1947), The Red Shoes (1948) and The Tales of Hoffmann (1951). Age of Consent continues this trend, albeit in somewhat diluted form. Bradley Morahan (James Mason) is a successful painter living in New York City who is exhausted and dissatisfied with his life and work. This is exemplified in an early scene where Morahan visits a gallery show of his recent work. A loud, gauche couple discusses buying one of his multicolored rugs. Morahan, listening surreptitiously, winces as he hears their conversation; they base their decision on whether it will look good hanging over their fireplace rather than on aesthetics or artistic merit. Another patron, however, beats them to it, throwing the rug over his shoulder as he walks out of the gallery.

Afterwards, Morahan laments to his dealer about how he used to care about “colour, light, sensuality” but now feels uninspired and trapped. “I need to be outside”, he says. To this end, Morahan returns to Queensland, Australia, the land of his birth. This bit of information is given to us in an amusing scene where he is having sex with his girlfriend as a television interview featuring him plays in the background. Subsequently, most of the film takes place in this beautiful environment (it was mostly shot on Dunk Island), and features some nice underwater shots of the Great Barrier Reef. Morahan returns here to recharge his batteries and gain inspiration. Cora (Helen Mirren), the untamed young woman who becomes his model and muse, is instrumental to this end. What is most interesting about the film (and probably doomed it to commercial failure) is the restrained manner in which this potentially salacious material is handled. Although Mirren is in various states of undress throughout the film, from a wet dress to swimming fully nude through the Great Barrier Reef, the film concentrates more on Morahan’s struggles to create despite myriad distractions. The distractions include Cora’s crazy, drunken grandmother (Neva Carr Glynn), and Morahan’s pest of a friend, Nat Kelly (Jack MacGowran), who invades his house later in the film. Morahan’s paintings and sand sculptures have much more prominence than any kind of sexual relationship between Bradley and Cora.

The theme of the artist obsessed with achieving his vision connects this film most obviously to The Red Shoes. Although Mason’s artist lacks the feral passion of Anton Walbrook in the earlier film, there is still a sense here that Morahan is focused more than anything else on regaining his identity as an artist. Cora complains to Bradley near the end of the film, “You only wanted me for the pictures”. Morahan insists, “You made me see again. You gave me my eyes.” However, this potential conflict is dissipated by the film’s rather abrupt conclusion.

The film is not without its flaws. The Nat Kelly subplot, concerning his slapstick seduction by a woman on the island, is wildly out of tone with the rest of the picture. Also, the lyrics of the unfortunate song that plays over the end credits (“Cora, I loved you so, I watched you grow…. Now that you’ve reached the age of consent, love me, Cora…”) is more disturbing than anything shown in the film. However, there is a sombre, melancholy tone evident in the film that transcends the weaknesses of the material. It is tempting to attribute this feeling to the state of mind of Powell himself, in forced exile, his career in decline due to the savage reception of Peeping Tom, a neglected and forgotten auteur years before his reemergence, partly at the behest of his great champion ,Martin Scorsese.

In a number of ways, Powell came full circle with this film. He began his career as a director of “quota quickies”, and learned to inject whatever artistry and skill he could to often substandard material. In Age of Consent, he was obliged to do much of the same. We can see some of the old wit and magic, for example, in a couple of neat visual jokes in the film’s opening. One is a parody of the Columbia logo, with a Cora-like sand figure taking the place of the woman holding the torch. Also during the opening, there is a nicely executed transition from the Great Barrier Reef to a New York store display window via a match cut involving a watch. In addition, Michael Pate, one of the film’s producers, was the son-in-law of Joe Rock, who produced The Edge of the World, Powell’s first personal work. Age of Consent can be seen today as containing palimpsests of earlier, greater works, and despite its flaws, is nevertheless well worth watching, mainly for the always fascinating James Mason, and Helen Mirren’s spirited performance as the artist’s muse. Age of Consent, as a fascinating example of an auteur’s later work, is an unjustly neglected film that is deserving of its eventual rediscovery.