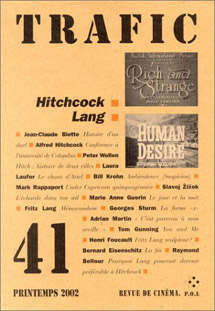 It’s most appropriate that the cover of the special issue of Trafic devoted to Alfred Hitchcock and Fritz Lang features images of the title cards from Rich and Strange and Human Desire. Not that the 1931 Hitchcock film or the 1954 Lang film represent their respective maker’s best or most characteristic work. It’s that the titles are so suggestive of what they’re both about – and the curious fate film history has held for them. Alfred Hitchcock (1899-1980) has often acknowledged the great impression Der Müde Tod (aka Destiny) (1921) made on him when he saw it in 1921. Even more than Metropolis (1926) this elaborate, fanciful, multi-part movie represents the power and authority Fritz Lang (1980-1976) wielded in the silent days. Yet the man who the “Master of Suspense” regarded as his own Master fared poorly in America – almost in direct proportion to Hitchcock’s success. Refining the suspense elements of Lang’s Dr. Mabuse the Gambler (1922), Spies (1928) and M (1931) into a style of his own, Hitchcock moved from leading British director to virtual Star in America, with films like Strangers on a Train (1951), Rear Window (1954), Psycho (1960), North by Northwest (1959), and most especially Vertigo (1958) inspiring several generations of ordinary moviegoers as well as specialized cineastes. Lang, by contrast, has remained an aesthetes‘ delight, for such American films as Moonfleet (1955), Rancho Notorious (1952), The Blue Gardenia (1953), Secret Beyond the Door (1948), House by the River (1950), While the City Sleeps (1956), Beyond a Reasonable Doubt (1956) and the final German films The Tiger of Eschnapur (1958), The Hindu Tomb (1959), and The Thousand Eyes of Dr. Mabuse (1960) grist for the diverse mills of Jacques Rivette, Luc Moullet, Michel Mourlet, Jean-Pierre Oudart and Raymond Bellour.

Rivette, Moullet, Mourlet and Oudart aren’t represented in the special Trafic issue, but Bellour is with an article appropriately entitled “Pourquoi Lang Pourrait Devenir Preferable a Hitchcock.” The simple answer is that while writing on Hitchcock is voluminous – its conclusions long-accepted – the same can’t yet be said of Lang. To this end Adrian Martin’s Trafic piece on Lang’s use of sound, “C’est Parvenu a Mon Oreille” is most helpful – sound being another element the field of film studies has barely begun to speak about. A piece by Tom Gunning on Lang’s Brecht-inspired crime film You and Me (1938) is also illuminating, as is Bernard Eisenschitz’s “La Fin,” which takes varying critical reactions to Lang into account.

On the Hitchcock side the Trafic issue offers a fine essay by Mark Rappaport (a brilliant filmmaker who is also a brilliant film critic) on Under Capricorn. Made in 1949, the second film by Hitchcock’s own company after Rope, and just as devoted to the long take as that film whose brilliance is only just beginning to be recognized, Under Capricorn was a critical and financial disaster, that was nonetheless taken up by Hitchcock enthusiasts at Cahiers du Cinéma – particularly Eric Rohmer (its influence on his recent The Lady and the Duke [2001] is fairly obvious). Rappaport looks at this period melodrama with fresh eyes. And that indeed is what’s required for any consideration of the work of a filmmaker so seemingly familiar.

a fortiori when the subject is Fritz Lang.