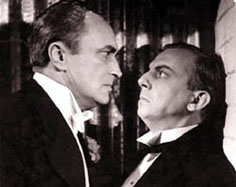 In his autobiography Michael Powell described Contraband as “all pure corn, but corn served up by professionals, and it worked” (1). This is perhaps how audiences have most often approached Contraband, as a slight piece of British World War II propaganda with entertaining asides of comedy and romance; charming and well-made but little more. Beyond this a rating as a minor imitation of Powell’s great rival Hitchcock might be bestowed, even if for little reason other than its concern with spies. But unlike Hitchcock, the cool observer, Powell was always a hot-headed rebel, and as such his views on war, whether between nations or the sexes, are more unconventional.

Ostensibly the film serves as an explanation of role of British Contraband Control and the blackout conditions (Blackout was the name given to the film on its American release) in the early stages of the war. Featuring Conrad Veidt as its main hero (Captain Andersen, a ship’s captain and Danish neutral), the film questions neutrality as a position taken by nations and individuals in the war. And yet, Andersen’s willingness to subvert and avoid all manner of British law enforcement and military personnel in his search for Nazi spies does not exactly send a message of institutional respect. Add to these elements Veidt’s clear German accent, his key place in the history of German cinema (as the star of The Cabinet of Dr. Caligari, 1919), the film’s series of nods to another great of German cinema, Fritz Lang (a secretary in the film is even named Lang), and one may begin to question just what is being propagandised here?

Michael Powell and Emeric Pressburger (they weren’t quite The Archers yet, but Contraband marked Powell’s second teaming with his émigré screenwriter) would later get into considerable trouble with Churchill on The Life and Death of Colonel Blimp (1943), when they suggested that not all Germans were bad, and that traditional British codes of honour were meaningless in fighting such a ruthless enemy as the Nazis. Britain had to fight dirty, they essentially argued. These theories are also propagated by Contraband, if in a somewhat undercooked fashion. So Veidt fights dirty as he tracks down the Nazis – beating up some British officers in his quest – while the meta-cinema of Contraband (mentioned above) clearly shows an affection for a lost Germany.

After the completion of one day’s shooting, Powell reflected on the humanist qualities and “league of nations” resonances of the film’s making:

That evening, at the Ramsgate Hotel, I could hardly believe my eyes as I looked around the crowded lounge. The bar was doing a brisk business, and our crew, including Conrad Veidt and Valerie Hobson and Esmond [Knight], were hobnobbing with the Royal Navy and The Royal Navy Reserve, and the Royal Volunteer Reserve, all very much on deck. Connie and Valerie had the biggest crowd around them, asking what it was like to be a film star, and telling them what a wonderful job they had done in The Spy in Black. Connie had been granted British citizenship the year before, but here in another group was [set designer] Alfred Junge, an enemy alien (for although he had been in England continuously for fifteen years, he had never taken out naturalization papers). Yet here he was, holding forth to a circle of admiring senior officers on how you design a motion picture, and asking searching questions about Ramsgate and Contraband Control, which should have got him interned for the rest of the war. Emeric, another enemy alien, was seated at a table with the Chief Constable of the country, expounding the script and explaining how we cut between studio and real exteriors. I rubbed my eyes and marveled. The mighty names of London Films and Alexander Korda had helped, of course, and everyone here had seen, The Lion Has Wings and The Spy in Black. But it couldn’t possibly last. Such openness and enthusiasm, and such innocence! (2)

This may help account for the political rebelliousness of Powell’s cinema, but what of its sexually subversive qualities? Veidt and Hobson have a peculiar on-screen chemistry, akin to that of the warring Cary Grant and Rosalind Russell in His Girl Friday (Howard Hawks, 1940). Hobson’s Mrs. Sorensen is divorced, and certain aspects of philosopher Stanley Cavell’s conception of the “Comedy of Remarriage” can be applied to her romance with Veidt’s Captain (3). Though Andersen is not her ex-husband (a general requirement of Cavell’s model), their backgrounds do allow them to be much more frank and cosmopolitan in their approach to sex (one of Cavell’s key conclusions). There is a teasing maturity to their romance, sprinkled with hints of sado-masochism.

Early in the film, Andersen remarks of Mrs. Sorensen, “When I saw her come aboard I knew we were in for trouble.” His second in command replies, “Did you, sir?” “Not that I don’t like them that way”, finishes Veidt. When Mrs. Sorensen refuses to wear a life jacket, Andersen states, “Mrs. Sorensen, have you ever been put in irons? No – I thought not. You would find it more uncomfortable than wearing a life jacket.” When Andersen and Mrs. Sorensen find themselves tied up together, a rough, even violent sexual metaphor is provided: Mrs. Sorensen has to push on her ropes in order to help slacken his, and thus ease Andersen’s escape. As she induces pain in herself through quietly orgasmic sighs, Veidt’s response is an equally orgasmic – “good girl”.

Conventional gender roles are also somewhat reversed as the two characters chase Nazis throughout blacked-out, nighttime London. Andersen is without financial means throughout his sojourn in the capital and Mrs. Sorensen “pays” for most of their “date”. She is an equal provider for and protector of the man.

Overall, Contraband provides delight, charm and fun, with the kind of devious subtext fans of Powell and Pressburger have come to expect. By the movie’s end, with Veidt declaring “I’ve had enough trouble because of you and I fancy I shall have more”, we seem to have been provided with an apt prediction of the horrors and heroics Britain was about to face. The fact that such a viewpoint, well after the defeat of European Fascism, still holds attraction bears well on Powell and Pressburger’s decision to anchor it to sex as well.