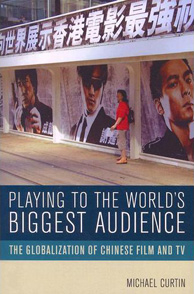 Books on Asian media with “globalisation” in their titles often address a familiar set of topics, such as the migration of Hong Kong film stars to Hollywood or the challenge posed to purportedly local cinemas by American blockbusters. What Michael Curtin attempts in Playing to the World’s Biggest Audience: the Globalization of Chinese Film and TV is quite different. Curtin, a Professor of Media and Cultural Studies at the University of Wisconsin-Madison, is less interested in the textual dimensions of global media than in their economic and structural conditions of possibility. In this compelling new study, he offers a rare synthesis of cultural theory and industrial analysis, focusing on recent developments in commercial, Chinese-language media.

“Chinese” here refers to the broader geo-linguistic sphere of what is sometimes called, not unproblematically, Global China, comprising Taiwan, Hong Kong and Singapore as well as the People’s Republic of China (PRC) (1). As Curtin demonstrates, these four sites have been linked by dense webs of cultural and economic exchange since the halcyon days of early Shanghai cinema. Together, they now constitute the world’s largest market, in terms of population if not (yet) disposable income, so it comes as no surprise that transnational Chinese media is the site of intense competition as media companies fight for a slice of the pie.

So, while Curtin frames his analysis around a strong theorisation of media globalisation, his primary interest seems to be in its manifestations at this regional level. In this sense his study represents an interesting contribution to debates around the cultural specificity of (East) Asian popular culture industries (2) – though it also means that the book’s title is somewhat misleading.

Curtin does a terrific job of explaining the logics and logistics of this expanding field, considering such issues as state regulation, censorship, audience tastes, technology, language, and, above all, the market economy within which contemporary screen culture is embedded. While its arguments are backed up with thorough secondary research, the book is based principally on material gathered through face-to-face interviews with distributors and directors (including Jingle Ma, Peter Chan and Johnny To). As a result Playing is very readable, with entertaining anecdotes about government censors, Canto-pop stars, dodgy dot-com billionaires, and triad stand-over men sprinkled throughout Curtin’s empirically-oriented analysis.

While it makes up the bulk of Playing to the World’s Biggest Audience, this industrial analysis is framed – sometimes implicitly – within a broader project of cultural enquiry. For this reason, the book is able to pull off something quite unusual, being of interest to at least three overlapping readerships: those interested in current trends within Asian screen culture, those concerned with the industrial machinations which underwrite these phenomena, and those who seek reliable information on this market for other reasons. This said, Curtin’s approach will not appeal to everyone. If you are expecting close textual analyses of the films of, say, Chen Kaige or Wong Kar-Wai, you may be disappointed. The type of scholarship on offer here is materialist and social-scientific; it is not formalist, and it is certainly not auteurist. But it is important work indeed – ambitious and interdisciplinary in scope, and a great read to boot.

Playing takes as its point of departure the “media capital” model which Curtin has developed elsewhere (3), and which is characterised by two complementary forces: the centrifugal tendency of distribution, as corporations seek new markets for existing product; and the centripetal movement of talent and capital, which concentrates investment and personnel within a small number of cosmopolitan media centres such as Los Angeles, Hong Kong, and Mumbai. As a tool for conceptualising media change, it’s very useful, and Curtin puts it to work throughout the book as a kind of theoretical backbone.

The interplay between the global and the local is also a recurring theme in Playing, though Curtin refuses both the doomsday scenario of cultural imperialism and the equally implausible fantasy of happy hybridity. Instead, he draws attention to some of the paradoxes that arise from globalising screen cultures. For instance, Curtin argues convincingly at one point that “cultural proximity” (the familiarity and “local-ness” of film and TV) is no easy index of cultural meaning. This is demonstrated by the popularity of two different genres of TV drama: the Chinese dynasty epics favoured by TV programmers throughout much of the region, and the trendy Japanese/Korean urban melodramas which may appear alluringly “modern” to non-metropolitan viewers. Curtin argues that both these genres exhibit different yet comparable degrees of exoticism which in fact make them more, rather than less, familiar to regional audiences. In other words, a kind of proximity-through-distance is at work here.

Elsewhere, Curtin proposes that the PRC’s heavy-handed approach to regulation and censorship is actually counter-productive, and that a focus on building local industries rather than fending off the threat of foreign media may have better served the government’s agenda. Yet he also notes that the state-run mainland broadcasters are considerably less nationalistic than private cable operators such as Phoenix, which see profits in populism. As Curtin suggests,

it is difficult to overlook the irony of a marginal TV service plucking the heartstrings of a country in which the government is exceedingly cautious about appeals to popular emotion. Here again we see Phoenix testing the boundaries of possibility in Chinese television while allowing those inside the ruling regime and the government media who benefit from such experimentation to maintain a plausible distance. (p. 208)

Most of the book is devoted to developments within the last decade, though the first two chapters venture further into the past, offering engaging accounts of the development of the two most important Hong Kong studios, Shaw Brothers and Golden Harvest. Curtin’s argument in these chapters is not as original as elsewhere (he reads the former as the product of a Hollywood studio model and the latter as an exemplar of flexible production), but these sections are nonetheless informative and thorough, and they offer one of the most lively introductions to Hong Kong cinema that I have come across (4). The same is true of Chapter 10, an absorbing case study of satellite services such as HBO Asia and MTV which situates a discussion of commercial strategy (the evolution of narrowcasting) within a broader analysis of public discourse around the perceived threat of cultural homogenisation.

The book does contain a few passages where the level of technical detail is unnecessarily high, and many of the statistics and other empirical claims are not footnoted (although a comprehensive bibliography is included), which makes the book slightly less useful to researchers than it could have been. However, these are small quibbles, and they do not detract in any substantial way from what is a gripping and valuable contribution to Asian media studies.

Playing to the World’s Biggest Audience: the Globalization of Chinese Film and TV, by Michael Curtin, University of California Press, Berkeley, 2007.