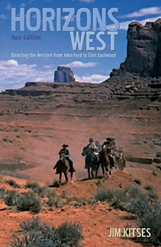 The original publication of Jim Kitses’ Horizons West in 1969 revealed the heavy impact of auteurism on the development of genre criticism. Thanks to the French New Wave, André Bazin and other writers affiliated with Cahiers du cinéma, it became both historically cool and critically legitimate to celebrate the Hollywood director and the Hollywood genre film as a potential source of “art”. In seeking to discern the artistic personality of the director across a body of films, auteurism spurred the academic study of Hollywood genres. Douglas Sirk was paired with the melodrama, Vincente Minnelli with the melodrama/the musical, Alfred Hitchcock was synonymous with the thriller, and Jerry Lewis with comedy (well, for the French at least; it took a little longer for the rest of the world to “get” Jerry). Yet, despite their examination of the genre films of certain directors, the auteurists remained uninterested in charting the broader, historical developments or trends of Hollywood cinema or in establishing the theoretical criteria by which to gauge particular genres. Three extremely influential studies in early genre criticism were to change that bias; all had inherited the critical framework of auteurism but were attempting to grapple with larger questions of genre through a select group of directors. Both Colin McArthur’s Underworld USA (1970) and Lawrence Alloway’s Violent America (1972) concentrated on the iconography of the gangster genre, while Kitses’ Horizons West was a close study of the Western through three directors, Anthony Mann, Budd Boetticher and Sam Peckinpah, all of whom Kitses had an obvious appreciation for (1).

This recently revised edition of Horizons West includes Mann, Boetticher and Peckinpah as well as entirely new chapters on John Ford, Sergio Leone and Clint Eastwood. A new, introductory chapter entitled “Directing the Western: Practice and Theory” succinctly establishes Kitses’ theoretical agenda. The introductory title is telling. Like the original Horizons West, Kitses locates his directors firmly within the Western genre. As opposed to purely auteurist approaches that argue that the director transcends a set of genre conventions through their personal style, Kitses views the director and the Western as working in unison to construct a mutually-informed system of generic signification. Reprising and expanding on his own words from the 1969 edition, Kitses states that Boetticher and Mann “together with Sam Peckinpah, can be said to have found their essence in the Western […] taking Ford, Leone and Eastwood also into consideration only strengthens the argument that [this] genre has a special value for those film-makers who return to the form” (p. 10).

In Film/Genre, Rick Altman has usefully established how genre study has been poised between contradictory inclinations. On the one hand, theorists arrive at a relatively simple definition of a particular genre (for instance, musicals contain song and dance routines) that can be used as an inclusive generic checklist and applied to a broad range of examples. At the same time, though, genre theorists continue to work from an exclusive canon in which the same films (and the same directors) are held up again and again as indicative of the entire generic corpus (2). In 1969, Kitses found the thematic resonance of the Western in the historical and geographic establishment of the American frontier, where films were usually set between the years of 1865-1890 and the generic conflict could be distilled to that of civilisation versus the wilderness (3).

In this edition of Horizons West, Kitses endeavors to redress his own “exclusive” list of Westerns by including thematic analyses of Clint Eastwood’s and Sergio Leone’s films. Although Kitses did not discount that Italians could make Westerns in 1969, he certainly never discussed them; an indication of the more general critical neglect that Leone suffered during the sixties and seventies (despite his popularity with American audiences) because not only were these films not made on American soil, they appeared to have no investment in the mythology of the American Frontier (4). Of course, Leone was about something else entirely in his lovingly operatic deconstructions of the Hollywood Western. Although Leone is now applauded by Kitses as a Hollywood outsider, whose films “celebrate, critique, and ultimately transform the Western […where] style makes the familiar genre change” (p. 253), Kitses appears to have little time for Eastwood. He begrudgingly acknowledges the importance of Unforgiven (1992) as a revisionist Western in which an aged gunslinger must come to terms with his own violence but claims that, unlike Peckinpah, there is “no attempt to implicate the audience in an edgy awareness” of that violence (p. 312). Elsewhere, he suggests that although Eastwood has been acclaimed as an American icon, the actor/director simply does not have the “national resonance of a Wayne, Fonda or Stewart” and that he is an icon of masculinity rather than the Western’s ethos (p. 307). Being included in the Western canon is not extended to everyone, it seems.

At the same time, this edition of Horizons West is totally dominated by Kitses’ exhaustively detailed chapter on John Ford, not only at the expense of directors like Leone but with no further updates on the work of Boetticher, Mann and Peckinpah. The first time around, Kitses felt it was too presumptuous to take on Ford; this time he provides detailed thematic analyses of all the Ford Westerns which is where Kitses is at his most interesting, even if his defence of Ford against charges of racism and sexism remains, at times, unconvincing. It is, admittedly, a daunting task to take on the “founding father” of the Western and one of the favourite pin-ups of the auteurist crew but Kitses seems overly carried away with his own hyperbole. The constant descriptions of Ford’s “luminous poetry” or his epic “Homeric struggle […] to dramatise the birth of his nation and deliver its vision” in which Ford “shape[d] the language of the cinema” (p. 32) seem just a little ironic in lieu of the fact that this is the one director who was not given to being verbose, notoriously tearing pages and pages of dialogue from his scripts when accused of being behind schedule.

Looking to veritable icons of the Western and predominantly Hollywood feature films to structure this intensive study, Kitses openly acknowledges his own subjective bias in approaching the Western. He writes that “colouring the attempt to be systematic in the analysis is a belief in the value of the poetry and ritual inscribed in the work of the film-makers studied here […] these directors [are] specialists in the Western” (p. 15). Many genre theorists have argued that film genres are not self-contained, evolutionary forms but develop as the sustained result of both industrial processes and historical concerns, shaped by complex relays between director, audience and industry (5). Negotiating the tricky divide of exclusive/inclusive approaches to genre, it is refreshing to find that Kitses is so open about the subjectivity of what makes a Western a Western. After all, it is his revision of his own book so it is entirely fitting that he talks about the Westerns that continue to move him. This idea hints at how crucial audiences actually are to the production of a genre film’s meaning, allowing us to critically avail ourselves of what Altman terms the “differing levels of genericity” that always inform our interpretation of genre (6).

For me, Kitses is at his most exciting when he approaches the collision of “the structure and motifs of melodrama [where] the community is seen as invariably the endangered family” in the Westerns of Ford (p. 42). Although he hints at such an underlying generic collision throughout his analysis of Ford and again in his chapter on Leone, he never deals with its implications for the Western or what this might mean for genre theory. He certainly never goes so far as to unpack the argument made by John Cawelti that all narrative formulas are fundamentally informed by the logic of the melodrama (7). There is also his somewhat annoying and reductive tendency to fall back on a “postmodern” aesthetics of recycling and pastiche of the Western in contrast to the classicism of Ford. Invoking Leone as the “first postmodernist director” because of his recycling and parodic excess (p. 275) while also referring to various contemporary directors like Sam Raimi and John Carpenter as responsible for postmodern Western-action hybrids, leaves me questioning the subjectivity of the postmodern catch-cry and asking what makes a postmodern Western a postmodern Western? Again, this calls up Altman’s differing levels of genericity. Kitses all too quickly rushes through the idea that even classical Hollywood had its generic hybrids and hyperconscious-generic products, in favour of reading more contemporary Westerns as instances of postmodern pastiche.

Concerned with his select group of directors, Kitses only vaguely mentions the importance of low-budget, B-grade genre productions in shaping the Western’s pool of conventions and audience expectations. Also, there are a number of commercially successful Westerns that altered the historical development of the genre (shifting the frontier to Mexico, introducing group protagonists, bounty hunters and an increasing cynicism towards the very community that the gunslinger had traditionally fought for) and these are dealt with only in passing. Although Westerns such as George Stevens’ Shane (1956), John Sturges’ The Magnificent Seven (1960), Fred Zimmerman’s High Noon (1952) and Nicholas Ray’s Johnny Guitar (1954) were made by directors who worked across multiple genres (as did the directors that Kitses examines, I might add), their impact on the genre cannot be reduced to how these films were filtered through the work of Kitses’ favourites.

As a re-packaged edition of the original publication, Horizons West is an important thematic/authorial discussion of the Western, to be placed alongside Will Wright’s Six Guns and Society (1975) and Christopher Frayling’s Spaghetti Westerns: Cowboys and Europeans From Karl May to Sergio Leone (1981). The influence that Kitses’ group of directors exerted upon one another makes for a neat, historical overview of the genre, but the revised edition is by no means exhaustive. There remains plenty of work to be done on the Western yet. Kitses rarely discusses the cross-media dispersal of the Western, aside from its relevance to Eastwood’s star persona as actor/director from his beginnings on the television series, Rawhide. Not only does this neglect the rich pre-cinematic history of the Western (Wild West Shows and literary traditions such as the Leatherstocking Tales, to name a few) and its ongoing popularity during the silent era, Kitses does not do justice to the televisual renaissance of the Western in the 60s, which occurred even as Leone was re-vitalising the Western for American audiences. That the Western should not be contained to the Hollywood feature film seems obvious right now, especially with the recent success of TV Westerns like HBO’s Deadwood or the cult following that Joss Whedon attracted for his sci-fi-western hybrid, Firefly. That said, anyone not acquainted with the films of Budd Boetticher and the Ranown cycle, in particular, must read Kitses’ chapter. The great passion of Budd Boetticher’s life was bullfighting and such beautiful scenarios of ritualistic behaviour gave Boetticher his distinct take on the Western. For some, Boetticher is up there with John Ford or Sergio Leone in his contribution to the genre…but maybe that is my own subjective take on what makes for a great Western.