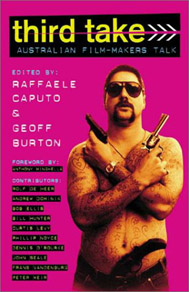 Cultural analysts in training might get a kick out of studying Third Take‘s arresting hot-pink cover, dominated by a still of Eric Bana in his breakout role as Chopper (Andrew Domenik, 1999). Part mug lair, part comic-book villain, “Chopper” in this image appears disturbingly inhuman – his eyes hidden behind reflective sunglasses, the smooth contour of his egg-like skull unbroken by his stubby facial hair and mutilated (prosthetic) ears. He’s stripped to the waist, his burly tattooed arms crossed over his chest, each hand holding a pistol. A third, very phallic-looking gun protrudes from his belt. The stance is knowingly intimidating, yet at the same time defensive, oddly vulnerable. It’s as if the familiar signifiers of male power have been exaggerated here to the point of parody, reduced to a brittle external armour. For all his cocky posturing, Chopper/Bana is less an indestructible Terminator, more a walking definition of the word “dickhead.”

It’s anyone’s guess how Third Take‘s designer fixed on the idea of using a simulacrum of a violent celebrity criminal as an all-purpose mascot for the Australian film industry, but if there are deeper meanings they probably weren’t consciously intended. On the most immediate level, this is a collection of interviews and articles, new and previously published, in which contemporary Australian filmmakers discuss their work. One (laudable) aim of the collection is evidently to bridge the gap between Australia’s film industry and its quasi-academic “film culture”: of its two editors, Raffaele Caputo is a freelance critic and sometime lecturer, while Geoff Burton is a prominent cinematographer and director who’s perhaps best-known for The Sum Of Us (Kevin Dowling & Geoff Burton, 1994).

Like its predecessor Second Take, the book is basically a lucky dip, more akin to an issue of a magazine than a comprehensive overview of a particular area. However, Caputo and Burton claim in their introduction that the issue of globalisation is of central concern here, “a fine thematic thread that weaves its way from start to finish” (p. 8). Unfortunately, the introduction itself is little more than a rambling series of modish leftist sound bites – bows to Naomi Klein and Noam Chomsky, a reference to anti-corporate activism as “the guerrilla warfare of the electronic age.” It’s not that Caputo and Burton don’t identify crucial issues: literally any account of filmmaking in Australia could be said to relate to globalisation, since (as the editors point out) all filmmakers everywhere must define themselves in the context of a global industry dominated by Hollywood. But precisely because this notion of “globalisation” is so generally relevant, it doesn’t do much to unify an otherwise miscellaneous group of interviews and articles. The shakily articulated politics of the introduction also don’t gain in credibility from being placed alongside a foreword by Anthony Minghella that suggests the spirit of the British Empire is alive and well (“if…making a film is most closely akin to making a war, then what is clear to all of us fighting the good fight is that the comrades of choice would have to be Australian” [p. viii]).

The individual contributions to Third Take inevitably vary in quality. It’s a truism that many filmmakers, including some of the best, are reluctant to talk analytically about their work. Some maintain a defensive focus on the nuts-and-bolts of technique (an article here by cinematographer John Searle is actually titled “I’m Not An Artist, I’m A Technician”). Others, like Peter Weir and Dennis O’Rourke, favour oracular statements that tend to be unrevealing at best, pretentious at worst. Somewhere in the middle are the two most interesting pieces, by Andrew Domenik and Rolf de Heer: both give detailed descriptions of their working methods, honouring the intuitive aspects of the creative process while illustrating how their films take shape through a series of conscious, practical decisions. Domenik’s article on Chopper recounts how that film’s tone and approach, arrived at organically after extended research, wound up surprising even its director: “I think Chopper is a really strange film and I would love to see it not having made it, simply to know what I think of it” (p. 77). In roughly comparable fashion, de Heer affirms his double identity as independent artist and calculating businessman – implying (perhaps disingenuously) that the ground-level challenges of budget and circumstance actually liberate his subconscious.

Again, it’s not wholly clear how these ideas connect with the official theme of “Australian cinema in a globalised world.” I assume that Caputo and Burton simply meant to give examples of Australians working in a range of production contexts, from Hollywood studio employees to internationally funded low-budget art filmmakers. But here it must be said that the book’s “take” on its subject is damagingly (and surprisingly) limited. The most unfortunate oversight – the near-total absence of women – has already been pointed out, in a widely circulated letter. (1) Almost equally glaring is the fact that just about all the filmmakers here are aged over 50 (Domenik might be the sole exception). I raise this last point not as a cheap shot at the baby-boomers, but simply to indicate that where this book refers to “Australian filmmakers” it tends to mean “well-known, long-established pillars of the industry.” Though the section devoted to documentary is titled “In The Margins,” other “marginal” types of filmmaking are ignored: there’s no discussion whatsoever of recent short films or videos, experimental or otherwise.

One book can’t include everything? Fine. But in odd contrast to the radical chic of the introduction, far too much of Third Take is devoted to a wearyingly familiar composite Portrait Of The Artist As A Middle-Aged Bloke: grizzled, ruefully humorous, self-lacerating and self-absorbed. The pervasive tone of boozy melancholy is conveyed most self-consciously by the sole female contributor, Martha Ansara, writing up her “encounter” with Dennis O’Rourke:

Dennis orders soda waters and says he doesn’t want to start drinking alcohol – but at a certain point in the conversation, we find we want a beer. I stop then and look at him, and he looks back at me, not knowingly, with little pretence of innocence, and I see a certain familiar woundedness. He’s one of those strawberry blond men you meet in hotels like this, perhaps a foreign correspondent, the last of a dying breed – going, going, gone with the old Australia. (p. 181)

The strained, hammy cadences, the dying fall… In this passage, specific meanings are predictably fumbled (how can a look be neither knowing nor innocent?) but we catch the drift. We know these gallant, wounded men. Their voices are heard throughout this book, above all in the 90 pages (of a total of 215) devoted to memoirs and interviews about the making of Newsfront (Philip Noyce, 1978). Here (in his role as screenwriter) we find the inescapable Bob Ellis, still trapped in the coils of his deluded self-mythologising, railing against the unnamed “clerks, bureaucrats and shifty conmen” (p. 123) responsible for the collapse of his film career. Then there’s Bill Hunter, whose incoherent yet revealing interview alternates between bluster and candour (“Courage is telling yourself that you’re frightened. I’ve been frightened all my fucking life” [p. 156]). Or Noyce himself, philosophical as he urges us to preserve the cinematic legacy of the ’70s: “The films are fading and need to be restored to their former glory – and so do the people” (p. 109). But some glories, alas, weren’t meant to last.

It’s curious and revealing that the elegiac quality of these interviews and articles barely differs from that of Newsfront itself. As Ellis puts it, the film was conceived as “a love song to all our fathers” (p. 121) and right from the start its creators seem to have been in mourning for a lost era and a lost style of manhood. Thus, while Newsfront was received in some quarters as a left-wing and vaguely “experimental” project, it now looks deeply conservative both aesthetically and politically, shot through with an intense though ambivalent nostalgia. The film’s sexual politics seem especially dubious today – it’s depressing but not surprising that in his interview Ellis manages to dismiss the most sympathetic female character as merely “the same strumpet first and last” (p. 122). In a familiar double-edged rhetorical ploy, Newsfront portrays the 1950s as an era of political and social repression, yet one that was somehow more innocent and genuine than what came after; similarly, the newsreels it takes as its narrative pretext are seen both as sad relics of a once-proud local industry and as the final flowering of an “authentic” Australianness subsequently killed off by TV and rock’n’roll.

If Newsfront conjures an implicit dialogue between the 1950s and the 1970s, by giving the film pride of place in their collection Caputo and Burton seem to propose a comparable dialogue between the 1970s and the way things are now. There’s a certain point to this, since it helps us see the continuities as well as the differences between Whitlam-era versions of left-wing cultural nationalism and contemporary suspicions of global corporate media. Ellis, who’s among the most eloquent of the interviewees here if also the biggest bullshit artist, argues that the “cultural colonisation” depicted in Newsfront remains a threat in this country, finding a recent emblem in the construction of Sydney’s Fox Studios. Yet it’s hard to feel so confident these days about what counts as authentically Australian, and the melodramatic climax of Newsfront – with true-blue Bill Hunter turning his back on the siren song of the US – no longer serves as a useful encapsulation of the issues, if it ever did.

A critical re-assessment of Newsfront would nonetheless provide a useful starting-point for a number of discussions – not only on globalisation and its discontents, but also on changing notions of masculinity, which, as I’ve hinted, are an equally central if undeclared preoccupation of Third Take. However, such a re-assessment is not seriously attempted here – lengthy as it is, the Newsfront dossier rarely extends its reach beyond repetitious production anecdotes. This is not too surprising given that the dossier was originally assembled not for this collection but for the release of the film on DVD, the interviews being principally conducted by Noyce himself. Someone coming from an outside perspective might have asked a few more probing questions, and perhaps challenged some of Ellis’ more bumptious and ill-informed statements (for example, claiming Newsfront to be “the first Australian political feature film ever made” [p. 119]).

Ultimately I suspect that some of the waywardness of this book may stem from the tension between two editors of different ages, backgrounds and ideologies: Caputo the cosmopolitan cinephile, and Burton the industry veteran and unreconstructed nationalist, with his slightly sinister belief in the need to protect Australian filmmaking from “excessive foreign cultural influences” (p. i). It’s tempting to rejoin that if past performance is any guide, Australian filmmakers would do well to remain open to as many “foreign cultural influences” as possible. The book as a whole also suggests that fears of being overwhelmed by foreign cultures often connect to and mask more personal insecurities: Newsfront can be understood as a parable about this, though it doesn’t help us much towards the problem of thinking about the two together.