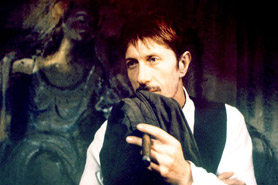 I hope that it will not be unpleasant to meet myself again after a long absence.

In Vincente Minnelli’s Lust for life (1956), Van Gogh seems to stagger through a landscape of his own paintings. Bedrooms, cafes, streets, fields and people are lit and arranged as they appear in his iconic canvases. The world is not presented as it is (or might have been), but as mediated through Vincent’s mind, his troubled sensibility.This is a form of cinematic Expressionism, and of a piece with Minnelli’s other studies of masculinity in crisis, such as Tea and Sympathy (1956) and Home from the Hill (1960); films where the inner torment of characters is projected onto the external environment, often heightened by the use of blatantly artificial studio sets.

Maurice Pialat is usually, if problematically, classed as a realist, and his take on Van Gogh is different to the earlier film. Like Minnelli, he films the world Vincent painted, but it is the world the artist sees, not the world through his artist’s eyes. This is partly the result of narrative emphasis: Minnelli condenses the whole of Van Gogh’s adult life into his film, dramatising key episodes to create the sense of one crisis crashing after another. Pialat expands the ten minutes Minnelli gives to Van Gogh’s final months in Auvers to two-and-a-half hours, necessarily creating a different texture.

The film begins with the artist (Jacques Dutronc) arriving by train at Auvers-sur-Oise, a sleepy backwater just outside Paris. The events of the preceding year are those which have made Van Gogh the archetypal “image of the artist as madman and failure” (3): his violent quarrel with Paul Gauguin in Arles; the slicing of his own ear; his self-incarceration in a mental asylum at Saint-Rémy; events tumultuously dramatised in Lust for Life, but barely even acknowledged in Van Gogh. He is in Auvers to recuperate under the supervision of Dr. Gachet (Gérard Séty), friend and collector of the Impressionists, and himself an amateur painter, with whose teenage daughter Marguerite (Alexandra London) Van Gogh conducts a sexual relationship. His art-dealer brother Théo (Bernard le Coq) sends him money, but things become increasingly difficult as he has his wife Johanna (Corinne Bourdon) and a new-born, sickly child to support; and their relationship becomes strained (4).

Pialat films this narrative with a lack of emphasis complementary to Lust for Life’s vivid hysteria. The profound difference between the films can be located in their respective central performances. Kirk Douglas dominates Lust for Life, his voice and body bursting through every frame, his flame-haired face contorting in pain as if about to turn into a “dark-side” monster like Dr. Jekyll or Bruce Banner. It is a performance attuned to the public myth of Van Gogh, the events of his life, and the intensity that sears his letters, extracts from which provide much of that film’s contextual information, locking us further into his worldview (5).

Douglas is so immediate because Minnelli, through dialogue, scenario and mise en scène, gives privileged access to Van Gogh’s feelings and thoughts. Pialat keeps his artist at a distance, never externalising beyond what would arise “naturally” from conversation; Van Gogh is often marginal to or even absent from whole scenes, “everyday” vignettes that have nothing directly to do with him at all (6). Dutronc’s is one of the great performances, coiled yet passive, its sullen calm occasionally breaking into banal violence, but mostly rendered through walking, painting, listening, doubting, thinking thoughts we can only guess at (Dutronc said of Pialat himself, “Like all directors, what’s in their head is a secret” (7)). Minnelli gives us enough reasons to make Van Gogh’s death inevitable, even understandable. Watching Pialat’s film, the suicide is as arbitrary as any of Van Gogh’s other gestures (8). His death is not viewed through a hagiographic, myth-making glow, but is bitter, silent, painful, spasmodic and dragged out.

This is not to dismiss Minnelli as conventional and theatrical in order to praise Pialat’s authentic realism. He may use actual locations, and privilege the routine over the dramatic, time passing (9) over milestones reached, but Van Gogh is as artfully contrived as Lust for life. Pialat has been accused of being a “chaotic”, “inelegant” filmmaker (10); this may or may not be true of his other films, but is plainly not of Van Gogh, which features some of the most quietly complex and rhythmic sequences in modern cinema, most memorably the 3½ minute tracking shot that follows Van Gogh and Jo back and forth on the riverbank during the fête sequence, the lack of an edit creating tension only broken when Vincent throws himself into the river.

Pialat’s structural care can be seen by comparing two mirroring set-pieces, both centring on a dance, both defined by their contrasts. The first takes place outdoors, and sees a demimonde (in the persons of prostitutes) tacitly encroaching on a “respectable” working- and middle-class fête of labourers, servants, doctors, wives, teachers and businessmen; the second takes place in a claustrophobic, labyrinthine brothel (but not lit with the expressionist flourishes a lesser director might have resorted to), in which the demimonde briefly entertain the respectable; Van Gogh, the artist trying to sell his wares, is the liminal figure between the two (11). The first set-piece is buoyant with light and the wary, ultimately bogus hopes of its participants (except for Vincent and the perceptive Jo); the second is dark, fraught with a suppressed violence that finds outlet in a sinister parody of a military march, perhaps reminiscent of the danse macabre sequence in La Règle du jeu (Jean Renoir, 1939).

This last reference suggests how far from “pure”, unadorned realism Van Gogh is. Pialat recognised only one cinematic master, Renoir; his formative experience was seeing La Bête humaine (1938; based on a book published in the year of Van Gogh’s death (12)). It is Renoir’s 1930s form of realism Van Gogh most evokes (in particular Boudu sauvé des eaux [1932], Madame Bovary [1933] and Une Partie de campagne [1936/1946]): the provisional composition of space and characters in relation to it, as if the director is in the act of setting up, or readjusting the frame, rather than fixing it finally; the use of frames-within-frames (such as windows and doorways) and sound to create a relationship between off- and on-screen space that is constantly in flux (13). Like Van Gogh and Renoir, Pialat seeks to pinpoint that historical moment when “a new society is developing in the old” (14).

Further, although he doesn’t obviously recreate Van Gogh paintings in the way Minnelli restages, say, Café terrace at night (1888) for the Arles café sequence in Lust for Life, almost every shot in Pialat’s film arranges itself into an approximation not just of Van Gogh’s works, but those of his contemporaries such as Toulouse-Lautrec, Caillebotte and Renoir père (15); these “quotes”, together with dances, snatches of popular music and set-pieces from “high” culture (such as the various recitals given by Marguerite’s music teacher [Claudine Ducret]) reveal a world mediated not through Vincent’s head, but the wider social and cultural context that finds, after his death, that it can “start again very quickly” (16), as it stubs its toe against a trap door.