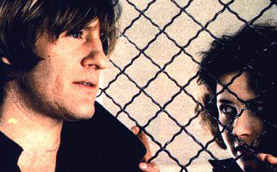 There are certain things that only film can express, and without film, these ideas would disappear, pure and simple.

Police opens with the jolting energy of a bull charging out of the gate, using sheer pent-up momentum to sustain its first hour’s torrent of intensely verbal and physical confrontations. The director fills the screen with entrances and exits and dislocations, as drug squad detectives shout questions to bully their arrestees, while the latter blithely and transparently lie, yet no one seems to change much for all the station house tumult. Running on a kind of tabloid energy, each scene unfolds from the viewpoint of detective Mangin (Gérard Depardieu) or the narcotic trafficker’s mistress named Noria (Sophie Marceau) or the amoral lawyer Lambert (Richard Anconina) – or some combination of the three – as they come and go in perpetual motion from holding cells to bars and cafés and discos to anonymous hotel rooms and seedy real-world lodgings.

With the second hour, the bluntly declarative action gives way to a concealed love story that exposes Mangin’s and Noria’s inner vulnerability and wounds, probing their sublimated feelings and barely acknowledged priorities. As the director moves from objective middle distances into intimate two-shots, the emotionally guarded policeman reveals the frustrated romantic yearning for connection buried beneath his workaday bluster and awakens to his own isolation in what Jean-Michel Frodon calls “the moment the soul becomes visible”, (2) a breakthrough that could qualify as the unique purview of cinema. Critic Frédéric Bonnaud argues that here a second film emanates from the narrative and “tries to forget the first, even contradicts it, imagining that the lovers can float along in a car or a bedroom, out of the world and out of the story… fragile and suspended in time” (3). Nevertheless, as the rigorously self-contained Noria, justifiably wary of entrapment, refuses to relinquish her independence, they find themselves at opposite ends of a spectrum of freedom and commitment and cannot advance to a meeting point.

In a directing career that stretched across 40 years, Maurice Pialat positioned himself as the mortal enemy of pretension, demonstrating that by clearing away all polite literary fictions, while spotlighting the human tensions between his actors, he could touch off lightning flashes of reality unique to cinema, illuminating emotions concealed in banal everyday existence and capturing life in all its messiness and contradictions. Hence, time has looked kindly on his 11 feature films wherein he mounted a startlingly original intervention on screen sentimentality, by reviving the founding paradigm of the Lumière Brothers, and aspiring to recapture the eternal present of their films, where documentary authenticity first crossed with fictional characters.

Pialat himself originated the genre project Police (4) as a deliberate effort to break through to a mainstream audience because without a major studio’s resources, he felt condemned to making an intimate cinema confined to two or three actors in a room. Granted his first substantial budget after seven previous features, Pialat placed two major contemporary stars – the well-established Depardieu, who would win the Best Actor award at the Venice Film Festival for this performance, and the 19 year-old Sophie Marceau, who had made a spectacular debut in La Boum (Claude Pinoteau, 1980) – in an unstable world where pleasure is fleeting and “evil is always an accepted fact”. If typical police thrillers centre on death and money, Police pays scant attention to the money beyond its function as ballast for the cops-and-druglords plot, determinedly pushing against the genre grain to address life and love. In conscious opposition to the neon punk posturing of the then-fashionable “cinema du look” embodied by Jean-Jacques Beineix’s Diva (1981), Pialat stripped out any action heroics to focus instead on the loose ends that create a lived immediacy, aiming for the real-time tension of a documentary where film stars are lit like nobodies and put to work aside novice actors.

To Pialat humans are neither good nor bad, just infinitely fallible. Human law inevitably reflects these imperfections so that criminals and crime fighters share more traits in common than not, such as Police’s shady defense lawyer Lambert, who avows that “My clients are all guilty, I’m sure of that”. No moralist, Pialat tells us nothing; rather, he shows us how we live and act. Hence, his attempt to show “cops as they truly are” features no glamorous shootouts or car chases (at one point Mangin sheepishly admits that he’s never shot anyone). Nor can this character be mistaken for any idealistic upholder of the law, as he tries to browbeat victims, offers to suppress evidence and plant drugs, and breaks the nose of one suspect and then berates him for bleeding on his good shirt. When he later returns stolen narcotics and bags of cash to the criminals, one Tunisian says, “It’s the world turned upside down”.

With no concessions to self-congratulatory multiculturalism, Police depicts a cast of underclass characters receiving an equal opportunity for mistreatment in France’s stewpot, frankly acknowledging that casual racism against Arabs, Vietnamese and West Indians predictably begets violence. For example, Noria tweaks the detective, asking “What do you know about Muslims except roughing them up?” Nor does the film’s portrayal of women hold any illusions about sexual politics: an Arab dowager silently hovering in the background becomes a reminder of traditional gender roles, but one young female trainee for police commissioner finds herself slapped and groped. Sex is as much physical necessity as assertion of power, and among his numerous assignations Mangin makes conversation with a call-girl (5), confiding that “My mother said if she could do it all again, she’d be a whore”, and later attempts an ambiguous joke by voicing the facile Freudian explanation that Pialat always mocks: “My mother didn’t love me so I’m taking my revenge on all women” (6).

Bracingly unafraid of vulgarity and lumpy storytelling forms, and unsentimental to a point approaching brutality, Pialat shaped his films to reject consoling social myths and shun complacent certainties for an unmanipulated objective vision, to follow in Renoir’s footsteps (especially in Toni, 1934) by presenting the lives of the unexceptional majority, those ignored by cinema’s specialists in prettifying reality. His characters shed few tears, certainly none in pathos, but they reliably blunder against each other in constant readjustment to a story that’s by definition unfinished until death.

As Pialat openly disliked “American-style acting where every effect is calculated down to the millimeter… the Nicholsons and the Streeps… because it’s based entirely on artifice” (7), many have found in his work correspondences with the improvisation-friendly films of John Cassavetes, his Method acting contemporary who also bent genres and challenged received values, aiming to penetrate the phoniness of official reality (though detractors argue that the New York director let self-indulgent acting create a new form of phoniness).

A lifelong painter, Pialat nevertheless “loathed” polished pictorial cinematography, seeking instead rough visual textures wrested from raw natural light. Jacques Loiseleux, his camera-operator on five films, says the director only rarely looked through the viewfinder and never sought aesthetic effects: “This was not a cinema of effects” (8). Predominantly avoiding master-shots and fixed compositions, the fluidly shifting camera stays constantly busy adjusting and reframing the action. To critic Jean-Pierre Gorin, the director “imbues the space with a constant unfamiliarity…. The pleasure of Pialat’s film is, among other things, to see a director who never falls prey to the decorative.” (9) This is not to say that Pialat stages carelessly: watch how he shoots Noria’s visit to her jailed lover Simon: as the Tunisian asserts his family’s sovereign control over her, his body blocks her partially from our view, while his white-robed mother’s arm possessively moves up his broad back, her tattooed hand suggesting a quasi-tribal authority that supports his power.

From early cinema, Pialat adopts an unwavering respect for the moment, proceeding in scenes that begin and end without interruption from crosscutting or flashbacks. Although a single, barely remarked cut leaps three months in time, Police otherwise unfolds in a temporal present, even when it slows to a dreamlike pace for a blue, shadowy seduction scene where Noria submits to public sex with Mangin in a darkened office, as people pass by in the corridors and the camera discreetly tracks off to the side. The past, Pialat seems to say, is finished: we can’t change it, so let it go and live in the moment. In that sense, he banishes history as well as judgmental psychology, charting a startlingly modern path that remains relatively unexplored even two decades later; though Iranian directors may yet follow it to a new strain of cinema that will penetrate the very heart of the art’s potential.