Thanksgiving, November 2005. Sheltered from a cold night in Boston, I am watching a DVD of The Time to Live and the Time to Die with my friend Michael Kerpan and his family. This is my fourth viewing of the film but I still notice new things about it, thanks especially to Michael, who catches little details, like how kids stealing scrap metal accidentally leave their bicycles as they flee in a panic. Or how a shot of kids playing a game in a corner leads to a shot of a boy burying something under a tree, which leads to a scene of a mother scolding that boy for stealing money to gamble – and there’s no way for this sequence to make sense until the last scene ties it all together. “When you watch his films, you have to be interested in noticing things and putting things together”, Michael says.

Moreover, it reflects a unique and genuine way of approaching childhood memory. When we were kids, so many things floated by us that we couldn’t make sense of until a scolding, an outburst, or an incident brought the gravity of meaning to it. Hou Hsiao-hsien understands, like no other filmmaker I can think of, that it’s not a simple matter of nostalgic retelling but of taking one’s past and reanimating it in such a way that it’s once again alive and unfolding in an indeterminate present. To watch a Hou movie is to be confronted with one’s abilities to bear witness to one’s memories, not merely as a distant object to be contemplated or commemorated, but as a past life relived with present day immediacy.

I first realise this five years ago when attending my first Hou retrospective, while living with my mother in San Francisco. We score free tickets to the screenings and go to almost all of them, if only out of a sense of cultural duty, to see the films of Taiwan’s most treasured filmmaker. We fall asleep during a few of them; his sense of storytelling and rhythm is so off-kilter in its subdued manner that it is hard for us to engage (so much for the assumption that Hou films in an idiom that his fellow natives can understand). I have to look in the local paper to find a way into these films, and find a remarkable essay by Alvin Lu (1). Lu hones in on the cultural factors of watching a Hou film, which, he argues, has the potential to be universal, if only that the so-called universal language of Western commercial cinema didn’t have such a stranglehold on the way people watch movies:

What remains in his films are the traces of a language we might have all spoken, but that now feels erased, or perhaps never was. Certainly the casual, desultory drift of his films’ narratives more than anything else causes the inattentive viewer to fidget or doze.

I don’t want to be branded an inattentive viewer, but Lu’s words shame me with a gnawing apprehension that I can’t understand a kind of cinema that was made for people like me. As a Taiwanese American, my fear of having lost a native understanding is excruciating. 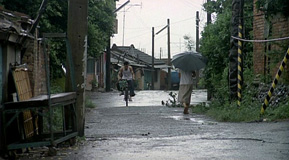 But Lu seems just as perplexed as I am. He revels in the mysterious relationship between cultural fact and cinematic fiction evoked by The Time to Live and the Time to Die:

It’s easy to forget as the film goes on that it’s a memoir and not vérité. Hou, from his characteristically distant camera, focuses on barefoot children playing a spin-the-top game in his old Fengshan village. The children act so naturally, and seem so engaged in their game, that one forgets to ask, Do children in Fengshan still play this game? Did Hou have to teach them how to play it? Or is this a case of time stopping, so that today’s children play the same games as those of Hou’s generation?

I am relieved and fascinated by these words. They suggest that Hou’s grasp of this rich culture and its even richer history is just as tenuous as mine, that he is as afraid of losing them as I am, and his films amount to a concentrated attempt to reclaim them. My own struggle to reclaim them thus begins.

Back in Boston, Michael asks me why the father never looks the kids in the eye when he talks to them. I say that the indirectness is a cultural thing, and while some might find this oddly impersonal, in fact the effect is the opposite – it suggests a family presence that’s located not just within your family members but in the spaces between you and them, the way their sounds and sensations are borne into the air and blanket you. Furthermore, the cinema of Hou, with his respectful, attentive wide shots taken from what feels like the furthest corner from his subject that he could find, captures this environmental approach to understanding human relationships as well as anyone: Ozu, Mizoguchi, Tati, anyone. That it is tied to a culturally specific mode of human interaction makes it far more substantial than a mere stylistic affectation.

This is just an example of the most generic type of realism. It’s a dime a dozen. It has no point whatsoever, really…. My major criticism of this film I must state right here and now: to only be able to proceed in one’s narrative by killing characters off is a sign of very poor authorship and a general lack of imagination.… More than halfway through the film, the mother of the main family discovers a growth on her tongue – count her dead, my brain said. Half an hour later, we were at her funeral. To top it off, Grandma dies…. Her death is so morbid that it becomes almost funny…. She ends up defecating and urinating all over the floor (apparently with great force – the shit stains are something like half a foot from her anus, which, I assume, is still covered in some fashion; she must have been eating some extraordinarily spicy General Tso’s Chicken or something). (2)

A fellow Internet Movie Database reviewer writes these words three years ago and I take it as an indirect but deliberate attack on me; not long before I had dismissed his love for Akira Kurosawa as a Westernised appreciation of Asian cinema. A weeklong argument ensues, repeatedly centering on who is being more “objective” in their appreciation. He continually questions my objectivity due to my ethnic predisposition to embrace these films, while I hammer away at what I perceive as his gross insensitivity towards such human experiences as death and dying, as if Hou’s treatment of them isn’t as refreshing as, say, a Quentin Tarantino movie. Unfortunately, I let it slip that my fiancée’s mother is dying from the most malicious form of cancer imaginable, and he dismisses my argument as overly informed by “personal issues”. (We have since then negotiated a friendship, and I’ve revised my views on Kurosawa, but I think he still hates Hou.)

Michael and I are nearly finished with our viewing. We learn that the father had tuberculosis, which was why he kept a distance from the children. This either contradicts or complements my interpretation that their distance was endemic to Chinese culture. By now I am comfortable with multiple and even contradicting ideas in play and my own part in steering them along, with people like Michael, Alvin Lu and even the IMDb reviewer as my cohorts. Hou Hsiao-Hsien is one of Michael’s favorite directors, but The Time to Live and The Time to Die is not one of his favourite Hou films. He enjoys it up to the point when the children leave the grandmother to rot, which he considers an unforgivable act of family irresponsibility and negligence. I am about to offer my own explanation for the children’s behavior when I realise that I am spending Thanksgiving with Michael partly because I still do not want to return home to tell my mother about my divorce, six months after the fact, and that I haven’t even spoken to her in that time.

It is five years ago, as I am starting to plot my escape from my mother to move across the country with my then-girlfriend-now-ex-wife, that my mother and I see The Time To Live and The Time to Die. Towards the end of the film, as we watch the lead character acting like a jerk and running wild in the streets, my mother sighs and mutters aloud, almost unconsciously, “Your uncle was just like that”. This is the moment that this movie becomes real to me, because it is real to my mom, and we have so little connecting us to begin with, for all the reasons depicted in this film: the indirect communication, the rigid roles and demands, the unexpected catastrophes leading to fallout and alienation. At last, one is left with the feeling of what it’s like to stand in their family’s house years later, awash in so many years of memories, and realise that those moments and the people who inhabited them, whether alive or dead, are gone forever, save in one’s memory. All of this may amount to more of the same “personal issues” that detract from a truly objective cinematic appreciation of this film, but the fact remains that for me, this movie was then, and is now, not just cinema as living memory, but memory as living cinema. It is my hope that it will live for you too.