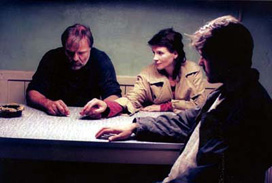 Code inconnu: Récit incomplete de divers voyages offers an “incomplete account of various journeys”, playing with the voyage’s promise of progress, change and destination. The largely linear chronology of the film, albeit with massive and sometimes obscure chronological gaps (signalled, but never situated, by the fades to black that punctuate each scene) is belied by the structure of the film, which might be described as a kaleidoscopic grid. A kaleidoscope, in that Code inconnu rearranges the same, narrowly focused, basic ingredients – plots, characters, locations, mise en scène – in shifting patterns of repetition, reflection, transference and displacement. A grid in that these patterns connect characters who share neither social nor narrative link – together with a visual style that alternates stationary takes with sequence shots that move forwards then backwards, left then right, in effect cancelling movement, all creating a milieu of stasis and paralysis. The film and its characters move – from Paris to Romania to Mali, from domestic space to professional life, from beggars to artists – and use a variety of languages, not just official “national” tongues, but incantations, sign language, body language, even expectorating – but don’t seem to go anywhere or say anything (1). The film ends as it begins, with a game of charades played by deaf children and a nine-minute sequence on the Blvd. Saint-Germain, in effect completing a vicious circle.

Because of this, you could take almost any scene in the film as emblematic. It begins with a young girl, vulnerable, speechless, tight against a wall, attempting to communicate with an unseen audience, just as characters throughout, and in particular the actress Anne (Juliette Binoche), will respond to, plead with and sometimes query offscreen controllers. The girl appears to be in distress, but it turns out she’s playing charades, the first instance of Haneke setting up a situation, then stepping out of it, and inviting us to play his game of cinematic and intellectual charades (2).

Code inconnu consists of 39 discrete scenes, a prologue and epilogue; all with four exceptions comprising a single take. The use of the long take, of real time, of temps morts, may seem to fulfil André Bazin’s ideal of cinema, respecting the integrity of space and time without the manipulations of montage and music (all sound until the final sequence is diegetic). But, as the prologue suggests, each sequence is in fact heavily contrived, restricted in visual and narrative information, stylised in terms of composition and lighting (in particular the limited colours used, mostly greys, blues and browns). There is also the question of each scene’s ideological weight – the eight sequences that last four minutes or longer all feature Anna, the white, cultured middle-class actress played by the film’s one name star. This might be part of the film’s strategy. Code inconnu, if we’re being honest, addresses an arthouse milieu belonging to a similar demographic. Does this explain Haneke’s resort to stereotype when dealing with other social groups? In the film, Africans get in trouble with the police, Eastern Europe is represented as a smoky, amorphous, inchoate, undefined place, and Romanians are shown as being less emotionally constipated than white Parisians, able to release their sorrows and frustrations in communal rituals such as weddings, singing and dances (although the wedding dance here is as monotonously and nightmarishly repetitive as an even longer set-piece in Béla Tarr’s Sátántangó [1994]). After all, stereotypes, clichés, rituals are all examples of unthinking repetition, embodiments of dead language and thought.

The first scene proper, a much-admired nine-minute sequence shot that (directly or indirectly) introduces the main characters, is a kind of explosion – lit by a casual act of contempt, when a frustrated young man (Alexandre Hamidi) chucks rubbish at a beggar (Luminita Gheorghiu) – which splinters the film into the fragments that are ultimately sutured by the last scene, three episodes of characters returning to the same street stitched together by the drumming of the deaf children heard on the soundtrack. Some have seen this as a hopeful sequence, with community somehow triumphing over the isolation of the individual, even though the drumming is alienated from the characters we see, two of whom appear to be splitting up (which the cynical might see as some kind of progress), and the third back to where she was at the beginning, and for whom the events of the film need not have taken place (3).

It is no accident that of the five scenes featuring editing, four of them deal with the business of image manipulation: Georges’ (Thierry Neuvic) two monologues over montages of photographs (the second of which bears no obvious link to the imagery, offering a break between sound and image in a film that rigorously insists on their relation, ultimately qualifying the “optimism” of the final sequence, itself a sound-image disjunction); and the two film takes featuring Anna, the second of which we see being dubbed (4).

Intellectually, Code inconnu is fatuous, self-satisfied sermonising on the same level as the abominations of Frank Capra and Stanley Kramer. What saves it is its dazed visual beauty, its use of the coolest formalism to emotionally devastating effect (the camera is usually motivated by character movement, while characters literally cross the space of the frame as they try to interact – perhaps the most telling pair of mirror scenes parallel Georges the photographer surreptitiously violating the privacy of fellow Métro passengers by photographing them, and his girlfriend’s humiliation and aggression by a youth on a similar train (5)). Many of the scenes are mini-masterpieces in their own right, evoking other major formalists such as Renoir, Bresson, Godard, Kieslowski and Kiarostami – one haunting fragment, as a tractor ploughs land diagonally across the screen, from fore- to background, might be a sound remake of some lost Lumière actualité. Each image is given three-dimensional body by on- and offscreen sound, providing thematic nuance to the film’s continual dialectic between language and silence, monologue and dialogue, personal storytelling and social stereotype.