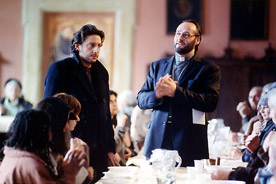 My Mother’s Smile has often been tagged as a surreal film, both by Italian and foreign critics. I would personally argue that this film, marking a key turn in Bellocchio’s career, a turn one might be tempted to regard as a renaissance, is simply a very realist depiction of Italy at the beginning of Third Millennium. It is not of, course, an explicit survey of societal and political issues, but instead an intimate portrait of the underlying tensions traversing the collective psychology.

The original Italian title, L’Ora di religione/The Hour of Religion, though much more prosaic than its international counterpart, provides a clear pointer to one of the two thematic motifs of the film, laicism. One needs to know that, starting from elementary and until high school, Italian students can decide, on a yearly basis, whether to attend a weekly hour of religious studies (a further detail worth noting is that teachers and professors of religion are not appointed by scholastic institutions, but by the local bishops). Therefore, the teaching of religion in Italian schools, a practice dating back to agreements between the Mussolini-led fascist government and the Vatican, called Patti Lateranensi, imparts the precepts and beliefs of the Roman Catholic Church. Before the relatively recent influx of immigrants, which posed the problem of integrating children holding other religious beliefs, mostly Islamic, this state of affairs, somewhat contradictory to the Italian constitution which, theoretically, grants equal dignity and respect to all religions, has never been seriously contested. The pressure to conform leads most parents, even those who do not profess any religious belief or affiliation, and would describe themselves as agnostics or atheists, to enroll their daughters and sons in the “hour of religion”, resulting in dismal figures of non-attendance (supposedly, schools are obliged to provide alternative didactic activities for non-attendees, yet I can recount through personal experience that this seldom happens). In the opening sequence of My Mother’s Smile, the son of atheist protagonist Ernesto Picciafuoco (a suggestive surname that sounds like “fire-starter”), who prior to the current scholastic year has never attended the “hour of religion”, is arguing with God on a balcony, praying for the Lord to leave him alone, as he has taken literally his teacher’s saying that God watches over all of us at all times. This introductory sequence gives an indication of the degree to which Italians, and the characters in the film, are imbued with Catholic doctrine.

On the other hand, the international title (used as a subtitle in brackets in the original) brings in the second thematic backbone of the film, the family. The bourgeois values and conformism within and magnified by the traditional (Italian) family have been targeted by Bellocchio’s angst and anger since his highly controversial 1965 debut, Fists in the Pocket/I Pugni in tasca. Yet, My Mother’s Smile represents the most cogent and layered update of this oft-recurring theme since that now-uncontested milestone of Italian cinema. There is no need here to spend a long periphrasis emphasising to what extent Italian society and Italians themselves are affected by the syndrome of “familism”, nevertheless, no other Italian filmmaker has undermined the foundations of this dominant mindset and lifestyle in Italian culture as Bellocchio. In My Mother’s Smile, Ernesto (played by a riveting Sergio Castellito, who won a much-deserved European Film Award for this performance) utters lines such as “we need to kill our fathers to make things change”, and although his intent is obviously metaphorical, someone else in the film, his now-interned brother, Egidio, has actually performed the act (it certainly wouldn’t feel inappropriate to regard this supporting character as akin to Lou Castel’s mother-killer in Fists in the Pocket).

Bellocchio intertwines these two threads in a paradoxical, yet plausible overture, as Ernesto, an artist whose creativity is castrated by his job as an illustrator of children’s books, receives the visit of a messenger from a certain Cardinal Piumini. Ernesto is invited the next day to a hearing with the Cardinal regarding the process of canonisation of his mother. “My mother? A saint?”, it’s by pronouncing such astonished words that Ernesto first sports that careless smile he has inherited from his mother, a smile many will reproach him for throughout the film. Chromosomes are indeed the sole things one cannot get rid of from his or her family. And Ernesto faces such a challenge, coming to terms with the acceptance of such a legacy, while refusing to comply with the master plan his family has been concocting for more than two years, without ever letting him know.

“The Picciafuoco family has lost its charisma”, “without a father you are no one”, argues the mastermind behind the plot, Aunt Maria (a short yet memorable appearance by Piera Degli Esposti). It’s the lifelong prestige and privileges, plus an “insurance on the afterlife”, that made the otherwise non-believer, Aunt Maria, set off on the enterprise, as well as making all the other consanguineous join her. Ernesto’s firm response appeals to the out-of-date virtue of coherence, one whose seed he will eventually sow in his son Leonardo.

By picturing the unholy commerce of faith and sanctity, and by fashioning an emotional peak in a sequence of blasphemy, My Mother’s Smile met with the disapproval of Italian prelates (yet the film received a special mention from the Ecumenical Jury at Cannes in 2002) and some censorship problems. Such inconveniences add tangible evidence to the fact that Bellocchio’s film represents the most powerful portrayal of the loss of rationality and of the new obscurantism ailing present day Italy. However, there is much more to My Mother’s Smile than its plea for laicism and the repudiation of “familism”, both in its articulate narrative discourse and in its plastic, almost pictorial beauty. On a merely personal level, this is an authentic, rare masterpiece that made me feel proud of being Italian, and immensely grateful to Marco Bellocchio, the grandest artist of contemporary Italian cinema.