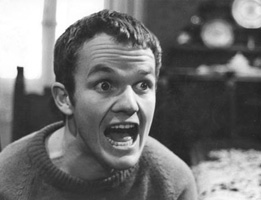 As a gesture, a fist in a pocket speaks of unsuccessful repression. If a fist almost always signifies impending violence, then a pocketed one flaunts this ferment and, at the same time, signals its own awkward confinement: the tense spasming grasp may be covered, but its intent is hardly concealed. Clenched inside a pocket, a hand outgrows the space designed to contain it. Relaxed hands, a resting palm, and even grasping fingers readily slide from view in a pocket’s depths. Once filled with rage, however, the hand – the fist – is much harder to put away.

Critics and scholars often read Marco Bellocchio’s 1965 debut film, Fists in the Pocket, as a premonition of unrest. For many, this film stands as a prophetic parable whose images, such as the fists evoked by its title, register the pent-up frustrations of mid-60s youth in the West – a tension that would eventually lead to the mass political demonstrations of 1968. Yet the film’s indulgence of gesture and violence suggests that before we rush to contain its visual volatility in the safe concept of the ‘60s “youthquake” Zeitgeist, we should consider how it not only retaliates against postwar Italian film aesthetics (particularly neo-realism) but also engages and confronts history (particularly the persistent vestiges of fascist subjectivity in contemporary Italy).

This film describes the demise of a fatherless bourgeois family of adult children still living at home in their provincial villa with their blind mother. It immerses the viewer in the familiar claustrophobia of being trapped at home with relatives; think of an endless family vacation, forced inside by inclement weather. This film suggests, however, that the tedious tension of mandatory suppers, the taunting abuses of sibling hierarchies, and the weight of financial squabbles takes an unbearable psychological toll on the bourgeois Italian family of the mid-1960s. Each character appears undone by her or his role in the family, and what results is a dark stew of listlessness, psychosis, incestuous attractions, and homicide.

Within Bellocchio’s scenes of ancestral claustrophobia lurks Buñuel’s sense of the violence of upper-middle-class stagnation and the brutality of elitism. (Buñuel, nonetheless, publicly dismissed Fists in the Pocket.) Bellocchio also borrows from Hitchcock in his exploration of how comfortably the sinister grows from the most intimate relations and in the most familiar settings. The narrative closely follows the character of Alessandro, a restless and insane young anti-hero who begins to believe that the practical solution to the family’s problems is to kill off first his mother and then a disabled brother. He carries out these murders with a calm and careful intensity. The deaths in this film occur through surprisingly gentle and unspectacular means: the tap of a finger, the gentle coaxing of a head slipped underwater and, finally, the decision to stay in bed and do nothing. According to Bellocchio’s view of the film, violence arises and breeds in a refusal to accept reality; the director goes on to describe Alessandro’s character as “not only decadent but semi-fascist” (1). Alessandro emerges, here, not as a herald of ’68 but as a symptom of fascism’s lasting and subtle hold on subjectivity. (In this respect, Fists in the Pocket may share as much with The Marriage of Maria Braun [Rainer Werner Fassbinder, 1978] as it does with Germania anno zero [Roberto Rossellini, 1947].)

In a manner similar to Antonioni’s interrogation of relationships, Bellocchio’s film deems the dominant mode of familial relations useless, outmoded and even dangerous. For Antonioni, the clash between modern industrial society and human relations results in a sublime formal dissonance. Bellocchio’s vision is more frantic and manic: family bonding dissolves into hysterical laughter, frenzied fits of anger, and dangerously willful paralysis. (The film uses the still photograph – family portraits with all their Barthesian connotations of loss, stagnating stillness, and irrecoverable presence – as a contrast to highlight ecstatic or seizing bodies.)

At the time, Bellocchio believed that a work of cinema alone could not produce politics. Instead, he felt films simply reflected political reality in varying degrees. At best, cinema served as a reaction against and provocation to the status quo. Fists in the Pocket is an easy read for those who wish to indulge its historically-reflective resonances: it is simultaneously autobiography (Bellocchio, roughly the same age and class as his protagonists, grew up in the house where the movie was filmed) and national allegory (the fatherless family may mirror the Mussolini-less Italy and its growing pains). Yet the film also self-consciously interrogates the notion of reflection through the narcissistic antics of its characters (Alessandro and Guilia spend a great deal of time in front of the mirror) and the use of Eisensteinian modes of montage between and within individual shots: the editing of the film boldly dispenses with many of the traditional transitions between scenes and spaces, thus encouraging a collision of two otherwise incommensurate ideas. Moreover, several long takes are composed so as to engage foreground and background in a dynamic dialogue. As a scene unfolds, otherwise banal background action gradually achieves semantic resonance, never upstaging the main action of the shot but extending and subtly complicating its meanings.

Gestures supply this film with a primary means of figuration, allowing Fists in the Pocket to shuttle between narrative and theme. By foregrounding and repeating certain gestures, the film forms a non-narrative commentary on societal concerns, contemporary politics, cinema history, nationalism, and the dogma of organised religion. (In fact, Alessandro’s genuflecting seems to anticipate the obsessive private rituals of Taxi Driver’s [Martin Scorsese, 1976] Travis Bickle.) The film’s central gesture is the epileptic fit. Bellocchio remarked at the time of the film’s release, “Film sometimes needs symbols, and to me epilepsy meant all the frustration, all the troubles and weaknesses often found in the young” (2). We might do well to question a political aesthetic built upon the allegorisation of the disabled body. However, either simply celebrating or rejecting the film’s use of a body in seizure as symbol avoids the important history of corporeality in Italian post-war cinema. We might instead view the seizures in this film as a self-conscious citation of the seizure at the moral and narrative crux of Vittorio De Sica’s canonical film Ladri di biciclette (1948). While the extreme corporeality of certain scenes in Fists in the Pocket may seem like hokey hyperbole or overblown allegory, they take on a different cast when viewed through the aesthetic history of Italian cinema. The use of the body in this film speaks to other texts – not only Ladri di biciclette but also Sciuscià (Vittorio De Sica, 1946), Roma, città aperta (Roberto Rossellini, 1945) and Paisà (Roberto Rossellini, 1946) – that depend upon unprecedented depictions of the violated human body as a means of shoring up moral certitude.

In an early scene, Alessandro dances with gymnastic ecstasy on his bed while brandishing a small sword. At one point, he dives onto the sword, which seems to pierce his chest. Here, the film leaves us hanging for a moment: have we just witnessed a suicide or not? Only moments later, Alessandro is up again, bouncing off the walls and continuing to rehearse a future killing – of himself or another. Scenes like this one suggest that we should never take Fists in the Pocket’s moments of violence, even its fits, as either literal or purely reflective. In other words, the film’s corporeality actually attempts to stymie a certain species of moralism. By subverting realism’s formal dependence upon spectacles of violence and victimhood, Fists in the Pocket comments on the ideological limits of neo-realism and attempts to break the political logjam created by postwar Italian cinema’s dependence on the corporeal as a means of triggering universal humanist sympathy. The politics of Fists in the Pocket become more interesting to consider when we approach the film less as a barometer of an impending Zeitgeist and more as a dialectic with the past. How this film articulates its place within and outside history may mark its most lasting significance.