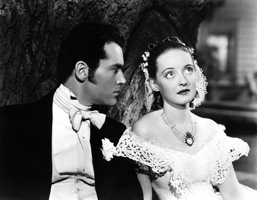 … a lurid Deep South women’s picture that allows Davis first to scheme then repent: it is lit up by her little girl’s conviction – a trash heap glowing at twilight… Now at last she was in her tortured element.

… a performance as vivid and inspiring as any star display of personality… [In Jezebel she has] triumphantly proved her point that a woman’s face can be appealing and moving even when not preserved in peach-like perfection.

Whatever you might do, I can do more, ‘cause I know how to fight better than you.

Julie Marsden, the combative, confronting heroine of Bette Davis’ first of three (magnificent) collaborations with director William Wyler is one of the actress’ most subtle and more complex characterisations. On the temperament scale, Julie simmers somewhere between the galvanising glare of the slatternly Mildred in John Cromwell’s Of Human Bondage (1934) and the calmly impassioned warmth of Charlotte Vale in Irving Rapper’s Now, Voyager (1942). Julie runs steaming-hot to icy-cold, and right back again, within narrative nanoseconds, and no-one seems to understand better the hellion’s mercurial, mixed-up mood-swings than the canny and crafty Wyler.

Wyler had already reined that stagy ham, John Barrymore, into giving what is widely considered that actor’s greatest and most nuanced screen performance in Counsellor-at-Law (1933). Likewise, Wyler had worked with such “difficult” talents as Margaret Sullavan on The Good Fairy (1935) and Frances Farmer on Come and Get It (1936), the latter film (co-directed with Howard Hawks) earning Walter Brennan the first of two Best Supporting Actor Oscars in Wyler-helmed material (the other was for 1940’s The Westerner).

La Davis had already proven herself a hard-to-handle diva both on-set and off-the-soundstage. And the egregiously “unsuccessful” but ultimately worthwhile breach-of-contract she contested in 1936 against Warners over some particularly thankless projects she’d been assigned to was still fresh news. But even she of the blazing passions, busy gesticulations, gun-bang line-delivery and bulging eyes turned out to be no match for the tough, tireless Wyler. As cine-historian John Baxter puts it, Wyler was “a director with a meticulous, exhaustive style who changed what had become [Davis’] mannerisms into new and adaptable technique” (3).

A considerable component of this rigorously revised flexibility in the actress’ admittedly spectacular arsenal of histrionic effects was the capacity shown by the tempestuous protagonist, at the centre of Wyler’s antebellum pre-Gone with the Wind romance, to draw visible reflective pause, to actually register thought (no matter how calculating) as well as feeling (no matter how capricious). Davis’ Julie may arguably represent her first foray into presenting a whole range of focussed mental processes, excitingly at work within the one character. Up to this particular point in the star’s by-now notable film career we don’t really “see” her thinking, as such, possibly because, as written and directed, the roles don’t really allow it. As far back as Cabin in the Cotton (Michael Curtiz, 1932) through to the astounding Marked Woman (Lloyd Bacon, 1937) we witness flare and fire, but rarely the stuff that serves to kindle flame, no matter how fast those preparatory stages might flash by.

Nowhere in Jezebel is this compelling dynamic more apparent than in the celebrated Olympus Ball sequence where our pampered, headstrong Miss Julie insists on wearing a scandalously scarlet gown to an affair where tradition demands that all unmarried girls dress in modest and maidenly white.

All the machinations which lead up to this plot-pivoting set-piece, including how Julie “plays off” one former beau (George Brent’s affably old-school Buck Cantrell) against her intended fiancé (Henry Fonda’s Preston Dillard, a sort of Ashley-Wilkes-with-balls), are staged with pacy intrigue, with Davis energising every tried-and-true feminine wile. The exchanges with both men are charged with ruthlessly executed manipulative moves by preternaturally determined Julie, Davis alertly demonstrating the precision-planning that’s required to get one’s own intimate (in this instance, escort-hooking) way with “effortless” dispatch and effect. Surprisingly, she flunks out with the similarly sharp-minded ex-, but does finally snare the initially reluctant rival, by directly challenging his manhood (“You’re sure it’s the dress? It couldn’t be that you’re afraid somebody’d insult me and you’d find it necessary to defend me.”)

So comes the much-anticipated moment, and it’s Fonda’s “Pres” who indeed impresses upon one and all the resolute mettle of his manhood, to the steely point of bluntly refusing to release a now-embarrassed and publicly humiliated Julie from her spitefully fuelled, utterly vain whim. Davis physically wilts as Pres sternly wheels her and her loud attire around a finally de-populated dance floor. The dazed hurt and overwhelming regret are powerfully portrayed, culminating soon afterwards in one of the actress’ most memorably executed snap-slaps, a fateful whack to Fonda’s stonily fed-up face that’s kind of instantaneously premeditated. Again, the numbed silence the act provokes, and the introspectively cocooned reflex responses it generates are brilliantly delineated by Wyler-steered Davis toward an emotive state which sadly compromises Julie’s characteristic pep and spark.

The dazzling kickback only returns with Pres’ own re-entry into Julie’s world “One Year Later”, this time accompanied by his Northerner bride, Amy (Margaret Lindsay). However, the regeneration of what could be called Julie’s “spirit” is narratively headed on a moralising collision-course, exacerbated by flirtatiously spurred-on duels, plus a suddenly significant sub-plot involving an outbreak of “Yellow Jack” Fever. After all, this is the generic realm of melodrama, set against the atmospherically appointed backdrop of early-1850s New Orleans, replete with tumultuous, smoky saloon bars, supporting characters with names like Aunt Belle (nicely played by Fay Bainter who says of her relationship with Julie: “Maybe I love her most when she’s meanest, ‘cause that’s when I know she’s lovin’ most”) and, of course, the constant presence of African-American domestics. The latter element feels especially corny, when viewed today, almost seventy years later, but we are afforded the unique (semi-camp) spectacle of a tensed-up Miss Julie, trying to appease narrative anxieties by singing out loud (as only Davis can), along with a “darkie” chorus of “Raise a Ruckus Tonight”.

Yet, despite the film’s hoarier plot conventions, the overall impact of Jezebel plays much better than a cut-price rush-to-release version of 1939’s Gone with the Wind, which is how it gets described (and unfairly dismissed) in some critical quarters. Victor Fleming’s MGM epic, though vastly engaging, does drag in spots, and often seems almost complacently clichéd. By comparison, this Warners/Wyler film, co-scripted by, amongst others, John Huston, is remarkably (re-)inventive when it’s least expected. A predictable encounter, for instance, between Julie and Amy on the stairs toward the end is made unusually suspenseful via some smartly indirect inter-cutting (to the otherwise bland Lindsay’s hand gripping the banister) as well as via the awesomely measured shading of Davis’ gently spoken declarations wherein high-toned sentiments are rendered more resonantly through being expressed, virtually muttered, low-key.

In short, the nexus between actress and director in Jezebel triumphantly juggles and blends composure with combustibility, pointing to a superb pair of jointly negotiated career-peaks still to come: The Letter (1940) and The Little Foxes (1941). Small wonder that the great lady, herself, made the following remark upon this, their very first teaming: “Jezebel is a fine picture. It was all Wyler. I had known all the horrors of no direction and bad direction. I now knew what a great director was and what he could mean to an actress. I will always be grateful to him for his toughness and his genius.” (4)