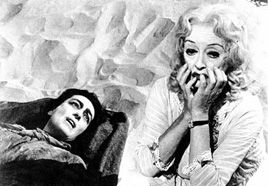 Nine years ago I attended a late-night screening of horror films in a run-down area of Los Angeles resembling the location of John Carpenter’s Escape from New York (1981). During the intermission between Tod Browning’s The Unknown (1927), starring a young Joan Crawford, and the screening of Aldrich’s film, audience members were invited to dress up like Baby Jane and perform “I’m Writing a Letter to Daddy”. Nobody dared to wear costume but several young audience members sang in a tortuous manner resembling the aged Baby Jane. I mention this incident to emphasise the fact that the film still retains the distracting connotations of a camp classic rather than the serious work its director intended. A year ago an American newspaper commented upon the inappropriate inclusion of Aldrich’s film in a Bette Davis DVD box-set, feeling that it lowered the revered tone of homage to a great Hollywood actress. In contrast, neither Crawford nor Davis objected to the film but performed their roles with the utmost professionalism and seriousness on the set. Aldrich also requested Baby Jane’s favourite song to be played at his own memorial service in 1983 along with the title theme from Hush… Hush, Sweet Charlotte (1964) (1).

What Every Happened to Baby Jane? is far from being a camp classic aiming to humiliate two former distinguished Hollywood stars now coping with the ageing process. It thus has serious claims for re-evaluation. Utilising the excessive nature of Hollywood genres such as gothic horror and melodrama, it transcends formula to reveal themes involving ageing and the damaging nature of dysfunctional family situations, the latter element also explored by Aldrich in Attack! and Autumn Leaves (both 1956). He would continue his interrogations of that area in such later films as Hush Hush… Sweet Charlotte, The Killing of Sister George (1968), The Grissom Gang (1971), and his unjustly neglected final work …All the Marbles (1981), as well as his aborted project The Greatest Mother of ‘em All (c. 1969) which only survives in the form of a promotional reel designed to elicit funding for the full feature version. However, two versions of the screenplay by A.I. Bezzerides and Leon Griffiths (the latter of whom also scripted The Grissom Gang) provide sufficient evidence for regarding this film as another Aldrich exploration into the terrain of the dysfunctional family. If Alfred Hitchcock has claims to be regarded as the father of the family horror films of the 1970s, Aldrich should be equally acclaimed as a key architect of this later Hollywood movement (2).

Charles Derry described Aldrich (along with Hitchcock) as an innovative deployer of the “horror of personality” motif found in post-war American horror films (3). Aldrich certainly made significant contributions to what would become the family horror film by reworking themes found within the films of Hitchcock. For example, in What Ever Happened to Baby Jane? he turned the “MacGuffin” aspect of Jane’s involvement in the crippling of her sister Blanche into a deceptive signifier that becomes redundant at the film’s climax, choosing instead to explore serious features within the human condition involving waste and the tragic thwarting of personal growth. Jane’s poignant words to her sister, “You mean we could have been friends”, result in her visual rejuvenation once the dark guilty burden of the past evaporates. Aldrich may be forgiven such cinematic trickery since his heroine needs this temporary release from a condition she has not really deserved. In many ways, it evokes a reverse version of Frederic March’s transformation in Dr. Jekyll and Mr. Hyde (Rouben Mamoulian, 1932). It is appropriate that Jane acquires two ice-cream cones from a vendor (played by Aldrich’s own son William), a pathetic attempt to heal the breach that has existed between her and Blanche since childhood (illustrated by her attempt to persuade her sister to enjoy an ice-cream in the 1917 segment of the film’s prologue). Jane now returns to childhood innocence after realising that her former monstrous persona resulted from a dysfunctional family situation as well as unconscious symbiotic complicity in her personal dilemma. Although Aldrich employs visual devices belonging to Gothic melodrama and the absurd aspect of the grotesque, he does not do so to effect a gratuitous indulgence in degradation and sensationalism. Instead, he probes another aspect of the dehumanised post-war American society previously analysed in such films as Kiss Me Deadly and The Big Knife (both 1955). Donald J. Lyons has also noted the subversive technique of generic destabilisation that occurs in such 1960s films as The Dirty Dozen (1967), where the audience is invited to identify with Reisman’s twelve disciples until the horrendous nature of their actual mission becomes explicit. Lyons describes Aldrich as a “Swiftian joker at the feast of reason” delighting in placing audiences within paradoxical situations. He further sees him as “the Devil’s travel agent, inviting us on what promises to be a regulated voyage up to a charted river. But we wake on the third morning and the guide is gone and the map is no good and the river is bounded by jungle on all sides.” (4)

For most of the film Jane appears to be the monstrous grotesque “other” until the climax reveals who is the actual monster but in a manner defying conventional audience identification and rendering any official moral judgment hypocritical. As Arnold and Miller recognise: “Despite appearances, despite unexpected revelations, we can never take absolute sides with either Blanche or Jane. They are both villains, and they are both victims. By the film’s end, to condemn either would be an act of supreme hypocrisy.” (5) Also, as David Cochran shows, the role of the grotesque formed a key part of an American post-war critical modernism that attacked the institutional values of a repressive culture (6). Aldrich uses this form in a manner intended to destabilise normal audience perceptions as seen in Jane’s haggish, grotesque persona and Blanche’s depiction as a victimised post-Griffith heroine.

Although repeated viewings do result in a greater awareness of the director’s subtle clues as to what actually is happening in the film, the credit sequence actually gives the game away immediately for those who are observant. Davis’ credit appears near the left of the screen while Crawford’s occurs on the driving seat of the ruined car. The film’s title emerges from the dark and shattered head of the Baby Jane doll. Aldrich’s director’s credit emanates from the same damaged brain, leaving little doubt as to who the director really identifies with. Jane Hudson is as much a victim of an oppressive family situation as Eddie Albert’s Captain Cooney in Attack! and Cliff Robertson’s Burt Hanson in Autumn Leaves. They are all traumatised victims suffering from stunted emotional development induced by dysfunctional family situations. Victor Buono’s Oliver Hardy-like character of Edwin Flagg, played as a court jester figure, reinforces this theme (7). What Ever Happened to Baby Jane? is actually a family trauma film whose dark implications are often disavowed by its misleading camp status, promoted by those who do not wish to recognise its disturbing themes of ageing and psychic oppression. It also employs the type of dark humour often seen in the work of Hitchcock. For example, Anna Lee is cast as the significantly named Mrs. Bates (a normal version of Hitchcock’s mother in Psycho?) whose daughter is played by Davis’ own daughter Barbara Merrill who would write her own version of Mommie Dearest over two decades later (8). The ground floor of the Hudson home contains a staircase and kitchen door shot in Aldrich’s favourite Wellesian deep-focus style, its set design also resembling the first floor of the Bates house in Psycho. As Blanche rotates on her wheelchair after “smelling a rat”, delivered to her by Jane in a perverse reworking of Hitchcock’s gourmet interests, an overhead camera dominates her image as if in homage to the master of suspense. Richard Combs, once remarked in relation to Autumn Leaves, that “Aldrich proves as adept as Hitchcock at suggesting a sense of disturbance about the everyday”, as well as at playing games with his audience by turning a domestic milieu “into an anarchically unpredictable environment” (9).

But the final revelation of “who did what” ultimately becomes Aldrich’s MacGuffin. Such questions do not really matter since there are wider implications. Jane has had a perversely close relationship to a father who has sacrificed her childhood by making her become the family breadwinner. Blanche’s proximity to her passive mother sows the seeds for her own passive-aggressive manipulations in years to come. All of the major characters are victims and victimisers who are trapped by traumatic events that occurred in their early years and which will affect them for decades to come. The audience may be inclined to laugh at these former female stars working in the “demeaning” horror genre, especially once their advancing years exiled them from the glamour factory. But like the jeering crowd during the final beach scenes, the final laugh will be on them, and us, unless they recognise the hideous damage inflicted upon the characters by such a revered Hollywood social institution as the family. They also need to come to terms with their own complicit involvement in these dysfunctional family situations, circumstances that have destroyed Jane and Blanche both mentally and physically.