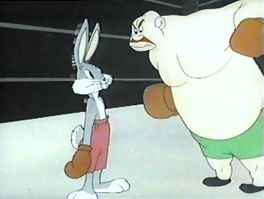 The late 1940s is a key period in the development of the Warner Bros. cartoon. This era sees the consolidation of three basic animation teams revolving around directors Friz Freleng, Robert McKimson and Chuck Jones, the introduction of such characters as Hippety Hopper, Marvin Martian, the Coyote and Road Runner, the reduction of available budgets leading to less obviously crowded and more “designed” cartoons, and the refinement of marquee stars Daffy Duck, Porky Pig (who becomes more of a character actor in this period) and Bugs Bunny. The transition from the more manic era defined by the work of Bob Clampett and Tex Avery in the early to mid-1940s is also marked by a somewhat artificial boundary. The large majority of cartoons made after the middle of 1948 were subsequently repackaged for television by the Warners studio, while the large bulk of earlier films were cut adrift to the endless circulation but diminishing quality and ultimate “invisibility” of public domain. Thus, subsequent, mostly post-cinema audiences of the Warner Bros. cartoon are considerably more familiar with the increasingly consistent (on the level of animation and design, in particular), character-driven, pose-ridden, and Jones-dominated works of the very late 40s and 50s. It is thus interesting to compare two works directed by Jones and starring Bugs Bunny that were produced on either side of that “divide”.

This period also sees the full emergence of Jones as the key driving force of the Warners animation studio. Although his work throughout the previous decade contains a number of significant cartoons (such as The Dover Boys, 1942, and Wackiki Wabbit, 1943), his films of this period are often more remarkable for their overall design, specifically in relation to character and background, than speed – such a delirious and determining quality in the work of Clampett – characterisation, or the gestalt combination of animation, expression, background, dialogue, sound and layout that marks his greatest cartoons of the 50s. It is not until the late 40s that Jones’ reputation for a precise, “analytic sense” of characterisation starts to properly form (1). The movement from Rabbit Punch, released in April 1948, to Rabbit Hood, the last cartoon released by the studio in the 1940s, may not seem all that significant in terms of characterisation, storytelling or even animation, as both films lack the more complex wordplay and character animation that marked Jones’ greatest collaborations with writer Michael Maltese in the first half of the 1950s, but a significant shift in both pacing and emphasis can be charted between the two cartoons.

Rabbit Punch proceeds – as many Warner cartoons of this period do – from fairly flimsy justifications and motivations. We are immediately introduced to the characters of the “champ” and the “challenger”. On the basis of size and demeanour alone this appears to be an extraordinary mismatch. Bugs is then heard from outside of the boxing stadium heckling the champ as a “dirty fake” and calling him to pick on someone his “own size”. From this point on we imagine that the bulk of the cartoon will be taken up by a bout between wily bunny and comically oversized boxer – we are not disappointed. The rest of the cartoon typically shows Bugs cunningly resorting to various kinds of “stragedy” in order to defeat his larger opponent. Although it is very entertaining, and often quite striking in some of its distorted and expressively coloured images, there is very little progression in this cartoon. Its main development is in terms of acceleration, reaching a kind of crescendo as the two fighters blast themselves from bow and cannon towards the centre of the ring. Even the visual style of the cartoon mainly reinforces this pattern of minor development and accelerating velocity. As the number of rounds reaches absurd proportions the spatial dimensions of the cartoon world, and the ring itself, also become more elastic and abstract. Although at this time Jones was consolidating his team of gag-writers, animators, background and layout artists, he was still working with such figures as background artist and sometimes layout man Peter Alvarado. Alvarado brought a freer, more comic book-styled sensibility to Jones’ cartoons, creating less concrete, graphically detailed architectural worlds than those drafted by Phil De Guard for many of the director’s great works of the 50s. 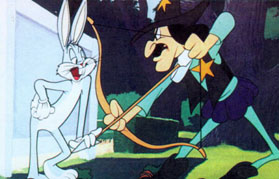 By the time of Rabbit Hood only 20 months later, Jones had developed a much more “serene and detached” style or approach (2); one less concerned with the principles of “velocity” (not a great strength in Jones’ nascent work anyway) that marked both action and dialogue in many of Warners’ cartoons (and beyond) of the 40s. As Michael Barrier argues, this shift in emphasis has much to do with the emergence of a more reflective and analytical approach to specific characters. (By this stage Jones had begun to articulate his somewhat intellectualised view of animation in a series of articles and had also introduced the Road Runner and Coyote – in the September 1949 release Fast and Furry-ous – great exponents of Jones’ burgeoning dynamic of movement and stillness, action and pose.) Barrier also argues that by the late 40s, “Jones began handling Bugs as if he were trying to keep his interest in the character alive” (3). I would argue that this shift mainly registers in Jones’ treatment of Bugs as an actor who plays a role. This is connected to but quite different from his use of Daffy from this moment on as a very consistent, highly vain and fallible figure who attempts – and mostly fails – to play heroic types in a range of genre parodies such as The Scarlet Pumpernickel (1950), My Little Duckeroo (1954), Rocket Squad (1956), and Robin Hood Daffy (1958). Bugs’ persona melds with the “serene and detached” qualities emerging and consolidating elsewhere in Jones’ cartoons. Thus much of Rabbit Hood is given over to mid-shots revealing a series of facial responses to particular situations and actions. In these cartoons Bugs truly emerges as an equivalent star to those populating Warners’ live-action stable. Jones’ insistence on Bugs as a consistent and explicitly self-aware persona – an actor who one can imagine (though this is of course “impossible”) existing “outside” of his cartoons – marks the consolidation and sensibility of the Warners Bros. cartoon for the next 10 years.

In the late 40s, Jones’ cartoons definitely start to consolidate and focus upon a more subtle definition of character, driven by the reams of expressive but logically progressive character poses that the director would draw for each cartoon. In contrast, Clampett’s more manic style is partly defined by the contorted extremes of the smaller number of poses he supplied to his animators. This reached a level of refinement in subsequent years to the point where, as Leonard Maltin suggests, Jones’ cartoons “could get a laugh just by having a character wriggle his eyebrow” (4). Such refinement is often the chief pleasure of the often-repetitive Road Runner series or the very subtle and nuanced expressive comedy of such Jones masterpieces as The Hypo-Chondri-Cat (1950), Chow Hound (1951), and Feed the Kitty (1952). The movement towards such truly “performative” animation is partly demonstrated by the contrast between Rabbit Punch and Rabbit Hood. Although Bugs was the most popular of Warners’ cartoon characters – and the only one to have a minimum quota imposed on his cartoons by distributors – he was less flexible and more reactive than a figure like Daffy. During the first half of the 40s Bugs took on various guises and tones in the work of different directors (almost schizophrenically so in Clampett’s cartoons) and it isn’t really until the latter part of the decade that he becomes a fully formed (and in some ways fully typecast) figure.

In some ways the endings of these two cartoons exemplify the subtle shift in tone – and even world – that occurs in this period. The endless rounds racked up in Rabbit Punch reach an absurd peak as the “champ” attempts to defeat the resilient and resourceful Bugs by tying him to a railroad track and running over him with a train. At this stage the flimsy boundaries of the ring have been well and truly transcended, allowing Bugs to finally appear in a pure void of white space having surreptitiously cut the film footage we are watching. These final moments play out as a kind of parody of the last minute rescue common in the rudimentary melodramatic serials of the 1910s (though complete here with extreme close-ups of Bugs’ bulging eyes). Thus, the premise of the cartoon merely acts as a stage on which the various gags are performed. The space of the cartoon is endlessly voluble, a world to be transformed.

On a surface level, the ending of Rabbit Hood may seem to offer a fairly similar view of its diegetic world. Throughout the cartoon, Friar Tuck intermittently appears to pronounce the imminent arrival of Robin Hood. After Bugs has completely overwhelmed the Sheriff of Nottingham, a live-action version of Robin appears, embodied by that other great Warners action star, Errol Flynn. Bugs quickly states, “Nah! That’s silly, it couldn’t be him?” But we aren’t so sure. Bugs’ statement speaks of the unspoken boundary between live-action and animation, as well as the different status granted to the stars that emerge from either realm. But are they so different? In essence, the ending of Rabbit Hood recognises that Bugs and Errol inhabit the same universe. This ending is, of course, the kind of typically self-conscious moment one commonly finds in a Warners cartoon – which overflow with references to other films, the studio, their own conditions of production – but I think it is also more revealing than this suggests. By actually placing Bugs and Errol in the same film, and have them almost exchange an eyeline match (despite the fact that Bugs is kind of playing the Robin Hood character in this cartoon and the live-action footage is taken from 1938’s The Adventures of Robin Hood), the cartoon suggests that as personas (or celebrities) they share key qualities. Both are “men” of action who bring a large part of their celebrity to almost all the roles they play. They both “act”, but also, in that most hackneyed expression of the celebrity-driven and off-the-cuff contingencies of Hollywood, merely “play themselves”. Daffy tries to “play” Errol in a range of cartoons like The Scarlet Pumpernickel and Robin Hood Daffy, but Bugs emerges as a closer equivalent to the exuberant action star (despite sounding more like a cross between Bogart, Groucho and carrot-chewing Gable in It Happened One Night, 1934). It is this key development in characterisation and stardom – and the studied poses that accompaniment it – that most marks the difference between these two cartoons and will lead to the masterpieces of character animation that Jones will make in the first half of the 1950s.