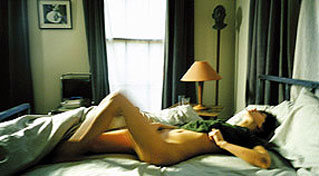 As the largest film festival in Spain, the San Sebastián International Film Festival is well-placed to represent Spanish cinema. And as are all large-scale festivals, it is a natural site to condense tendencies and explore, in a way more exhausting than exhaustive, contemporary cinema.

First conclusion, an obvious one: Spanish cinema has found in a type of socially-aware cinema its own character. Until recently, it was a cinema without identity, although there were fine directors such as Julio Medem and José Luis Guerín. Then suddenly films started to appear that claimed to speak about the reality as lived by contemporary Spaniards. We had our film about unemployment (Mondays in the Sun [Los Lunes al Sol] [Fernando León de Aranoa, 2002]), and another one about domestic violence against women (Take My Eyes [Te doy mis ojos] [Icíar Bollaín 2003]). Both films were screened at San Sebastián Film Festival, in 2002 and 2003, respectively. This year it was an unsuccessful prison drama: Horas de Luz (Manolo Matjí, 2004).

Second conclusion: this type of “social cinema” is not only a current tendency in Spain. Nowadays, all over the world, it is common for films to be regarded in terms of the issues they deal with and not for their sense of facture. Thus “what they talk about” is given higher importance than “how they talk about something”. Anti-George W. Bush films – such as John Sayles’ Silver City (2004), which screened at San Sebastián this year – are well considered as their cause is seen by most to be noble. However, to me, it must be proclaimed that this is a flat film, that it is not as powerful as his Lone Star (1996), that it has brilliant dialogue but it doesn’t really explain anything through its images. Its issue is its value and I fear, in these times, that might be deemed to be enough. Granted, it does have a magnificent opening; one that demonstrates well Sayles’ unique brand of irony: a propaganda spot shooting, a candidate – splendidly played by Chris Cooper, who could be the double of Bush – and a corpse fished from the lake. It was as if the Farrellys were making a film on politics.

Social cinema was further represented by François Dupeyron’s Inguélézi and this year’s Golden Shell winner Turtles Can Fly (Lakposhtha hâm parvaz mikonand) (Bahman Ghobadi). Inguélézi is the story of an immigrant (Eric Caravaca) helped by a woman (Marie Payen) who has recently lost her husband. Almost without dialogue, the film tries to present the communication problems between both characters and the way their encounter changes their lives. It tries to approach reality by a constant camera movement, though ultimately I found its script tricky and boring. Caravaca’s transformation is not enough to hold up a film whose characters are both unknown and without interest for the audience. 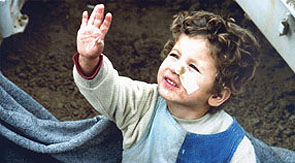 We will never know if Fahrenheit 9/11 (Michael Moore, 2004) won the Cannes Film Festival on its own artistic merits or for political reasons. We will never know either if the Iraqi Turtles Can Fly‘s prize was also political. However, much more than just being politically correct, the film beautifully combines humour with war devastation. Its strengths are its predominantly child cast (the casting was strictly of real Iraqi children without any acting experience) and an ending as hard as it is subtle. Through a single last shot Ghobadi leads us to a child’s painful resignation. Its story of four children caught in an impending war in a village in Iraqi Kurdistan is treated with a gentle sense of humour and is, surprisingly, very capable of leaving a smile frozen on the audience’s face; a good example of a tactful film dealing with very real social and political issues in a compassionate way. Similar in approach was Omagh, Paul Greengrass’ new film about the Irish conflict. Though the director of the recent The Bourne Supremacy only worked in the film as a producer (it was directed by Pete Travis), Omagh is a perfect Bloody Sunday (2002) follower. It features the same texture, same camera work and depicts the same issue. Omagh begins with exploring a reality but by the end it has also explored a complex matrix of feelings.

A great example of a film with both issue and form is Mike Leigh’s Vera Drake, a film about abortion and one of Leigh’s most formally rigorous works. His Vera Drake has a lot to do with other leighian housewives, from recent All or Nothing‘s (2002) Penny to Hard Labour‘s (1973) Mrs Thornley. Leigh has not lost his sarcastic style, though the film is not as comic as Secrets and Lies; so his criticism and pessimism show up. The film takes its time to introduce the issue of abortion, and the drama builds through a slow tempo, temperately introducing Vera Drake’s double life: after making some tea at home we find her boiling some water for the abortion.

The perfect inverse to all this “social cinema” was Zhang Yimou’s House of the Flying Daggers (2004). Above all an aesthete, Zhang has here found a place to condense all his plastic concerns in the form of an action movie. Hero (2002) was the culmination of Zhang’s obsession with colours (he started out his career as a cinematographer) and House of the Flying Daggers maintains this aesthetic concern from the beginning. A dance that suddenly becomes an attempt at murder, a dress that makes the screen look more like a painting, a fight in the middle of a bamboo forest… It is not the story that matters – it is nothing more than another love story – the point is that Zhang has filmed the most visually powerful sequences since Kill Bill (another film where form has primacy over the issue, another topical one: revenge).

Also from Asia came another aesthetically-minded genre work: Song Il-gon’s Spider Forest (2004). As hypnotic as a Kyoshi Kurosawa film, Song’s cinematography yields a strong eerie ambience and holds the tension to the end. It could have been the film of the festival if the story had been less complicated. And it was not the festival’s surprise find as there was Brad McGann’s In My Father’s Den (2004). A director from New Zealand who could have come from the deep south of America, McGann’s film is about secrets and families, about growing up and starting relationships. And though the issues are the material of an opera prima, McGann depicts them with maturity. Through complex editing and a subtle direction McGann shows up all sorts of family secrets and lies without falling into morbidity, looking after both his characters and the audience’s sensitivity.

The other surprise came from Uruguay. Whisky (Juan Pablo Rebella and Pablo Stoll, 2004) successfully and beguilingly combines the deadpan humour of Aki Kaurismaki with the auto-critical Argentinean cinema as exemplified in Silvia Prieto (Martín Rejtman, 1999). It is a story about two brothers that each own sock factories (there starts the rivalry as one factory is much shabbier than the other), a woman that loves to speak words backwards and a voyage by the three of them to Piriapolis that finishes in a karaoke bar. Monotony and loneliness are treated with a direct sense of humour, which is focused on the simple things. Great laughs and, once again, a frozen smile elicited by a dry ending. 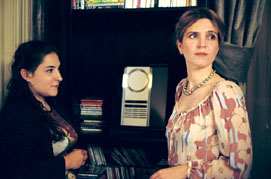 Another great comedy came from France: Look at Me (Comme une image) (2004). Agnès Jaoui is one of the freshest French screenwriters (often working with her husband/collaborator Jean-Pierre Bacri), as she already proved both in her debut The Taste of Others (2000) and the Jaoui/Bacri screenplays for Alain Resnais in Smoking/No Smoking (1993) and Same Old Song (1997), perhaps one of the best films of the 1990s. Look at Me is an acidic portrait of the liberal bourgeois, a frontal attack on perfect images and the idea of success. Jaoui presents her characters without sentimentality or pity. Even the dance teacher she herself plays has a moment to discover her hypocrisy. Sitting in a car with Lolita Cassard – a student she cares of only because she is the daughter of a writer she admires – she listens to Lolita telling her “you are the only one who is not lying to me”; Jaoui maintains the contra-shot so that her character’s guilt is plain and easy to detect.

Less interesting was the Chinese adaptation of Stefan Zweig’s novel Letter from an Unknown Woman, already filmed by Max Ophuls in 1948, and here directed by Xu Jinglei (Yi geng mo sheng nu ren de lai xin is the Chinese title). It was a conventional film with a basic hindrance to begin with: the lack of interest generated by the two main characters.

The purveyors of the Nouvelle Vague 45 years ago are still making fine films and having them screened at San Sebastián. Last year Jacques Rivette presented his Story of Marie and Julien (a film amazingly still without distribution in Spain); this year there was Claude Chabrol with one of his weakest films in years, La Demoiselle d’honneur, and Jean-Luc Godard with his new essay on the image: Notre Musique. Godard’s latest film is more a sketch than a narrative film with resolution: it is a three part essay, a reflection about exclusion – from Indians to Palestinians – a travel to Sarajevo, a master class about images and above all a question about twentieth century history.

As Winterbottom has always said, it is time for cinema to stop hiding sex, as it is a significant part of love stories. Even concerts – here by pop artists such as Primal Scream or Franz Ferdinand, and the inclusion of Michael Nyman, Winterbottom’s regularly composer – have their meaning, forming a link between both characters and perfectly filmed from an audience angle. If I started talking about “social cinema” in San Sebastián, Nine Songs might be seen as one of the most realistic portraits of a couple. In an interview Winterbottom said:

A film, though it is a fiction, always tries to show something real, something that has to do with the world. The fact that it is not a documentary doesn’t mean that a film has nothing to do with the world around us. You must observe. I think the audience that see Nine Songs gets to know what my characters are feeling at every moment. (1)

A realistic love story, poetic and crude, as painful as a good love song, Nine Songs is definitely one of the highlights of 2004.