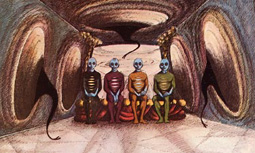 Oms. Traags. Terr. Tiwa. Info lessons. Imagination rituals. Ouvas. Ygam. Terra. These are just some of the characters, concepts, and places that surface in René Laloux’s mesmerising Fantastic Planet, one of the landmarks in European sci-fi animation. Released in 1973, and furnishing the French title The Savage Planet (La Planète sauvage), the film achieved many important milestones including establishing the benchmark of an animated sci-fi film that directly addressed adult themes. Another was the declaration of a distinct European alternative style of animation that can be contrasted starkly with those of the American animated genius Walt Disney or the Japanese master Hayao Miyazaki. For fans of those two monoliths, Fantastic Planet may be either a breathtaking and therefore worthy departure from animated norms, or a miserable, unnecessarily experimental deviation. For this reviewer, Laloux’s masterpiece is clearly the former. Based on Stefan Wul’s novel La Planète sauvage and drawing parallels to Swift’s Gulliver’s Travels and Planet of the Apes (the 1968 film and Pierre Boule’s 1963 novel), the film resonates with radical political and historical allegories drenched in European aesthetic principles.

When Laloux started writing the screenplay, he was a rookie in the animation arena. His previous shorts were noteworthy but failed to bring him the kind of recognition Fantastic Planet would soon offer. Those shorts include Les temps morts (Dead Times, 1964), a satire addressing death’s role in culture, and Les escargots (The Snails, 1965), a story that boasts a bizarre snail invasion. His first project, Les dents du singe (Monkey’s Teeth, 1960), is a primitive attempt at animation. During the creation of this first film, Laloux worked at the Cour-Cheverny psychiatric clinic, where he organised puppet shows for his patients, an experience that led to some of his early ideas in animation. But those earlier experiences of quiet artistic endeavor can be contrasted with the production and release of Fantastic Planet. Securing the continued assistance of writer Roland Topor, who helped design the film and write the screenplay (Roman Polanski would later adapt his novel Le Locataire for The Tenant), Laloux’s film was nominated at the 1973 Cannes Film Festival for the Palme d’Or and subsequently awarded the Grand Prix. At the 11th Trieste Science Fiction Film Festival, the film also won the International Jury Prize. Clearly, Laloux was on to something with Fantastic Planet.

The film begins by pitting two tribes of “organisms” against each other: the gigantic, blue-coloured, and intellectual Traags against the human-like, pink-skinned Oms, who were “removed” by the Traags, their eventual masters, from the planet Terra. A female Om and her baby are walking across a barren field; suddenly, the giant blue hand of a Traag aggressively stops her. The hand begins playing cruelly with the woman, who is eventually murdered by accident. A young Traag named Tiwa adopts the abandoned baby, names it Terr, and proceeds to keep it as a pet, which is standard practice on planet Ygam. The story that unfolds is narrated by Terr, who grows and matures alongside Tiwa and shares in the latter’s Information sessions, a strange meditative educational ritual. Methodically, Terr learns about Traag culture: they meditate constantly and send their consciousness in bubbles to hover over their planet; they contort their bodies through a strange ritual called “Imagination”; they harbour their race’s collective wisdom through “mental induction devices” to transmit knowledge to future generations; and although their planet harbours a host of bizarre creatures, the Traags seemingly live in detached peace. Terr later escapes his captors and joins a renegade faction of Oms. As the Traags seek to control these radical Oms, the film concludes in a final confrontation between the two groups on a satellite known as the actual Fantastic Planet.

Production for the film started in 1968 in Prague’s Jirí Trnka Studios. However, due to financing problems in Czechoslovakia, the filmmakers were forced to procure French financing, a production decision that allowed the film to still be completed in Prague. Nevertheless, the film faced another obstacle in August of that initial year when Soviet tanks steamrolled into Prague and occupied the city. Subsequent to the ruthless Soviet invasion, the film’s production was prolonged for four years and it was not released until 1973. In many ways, the film symbolically represents these events. The Communist occupation of not only Czechoslovakia but of other Eastern European countries is directly reminiscent of the Traags’ convenient enslavement of the Oms. Perhaps it is no coincidence that the word used to label the victims has the same pronunciation as the French word for man, “homme”, whereas the word used to describe the masters is more exotic and foreign.

Furthermore, the analogy of the pet-owner relationship is effective in representing the relationship between the Soviet Union and its satellite states. While the pets/Oms and the satellites experienced modest degrees of autonomy, their autonomy was always monitored and subsequently limited by the “masters”. Ultimately, in both instances, these “masters” sustained the fates of their servants. During the Communist occupation of Eastern Europe, it is no secret that the Soviets systematically destroyed and ruined infrastructures only to build them again so as to create the “benevolent dictator” image. This is often the modus operandi of many totalitarian states. Consequently, the pets and states needed their “masters”, but more importantly, the illusion of this need was fabricated and often promoted to laud the positive attributes of the “master”. Also, the illusion of freedom was always available from a distance in an oasis-like mirage, but it was levied in small doses. By tantalising the pets and satellites with glimpses of freedom, the “masters” reinforced and affirmed the hierarchical relationship that subordinated their servants. By providing limited instances of freedom, such as the one enjoyed by the mother at the film’s start, or the ones enjoyed by Terr while participating in Information sessions, the ”masters” could solidify their subjugation.

Two other elements of this film are also symbolic of social and historical phenomena. The first is the de-omisation efforts conducted by the Traags. These efforts eerily resemble Nazi gas chambers and concentration camps. Although the film does not spend much time graphically depicting the actual horrors of these exterminations, this is probably purposeful, because the film does an excellent job of portraying the terror they cause. The threat of de-omisation lurks larger than the actual de-omisation efforts themselves. This is a textbook study of how to psychologically terrorise a society. Often, the threat can be more demoralising and controlling than the act itself because the threat persists and endures while the act, albeit horrific and nightmarish, ends. Oppressive or terrorist states want the terror they create to linger and penetrate the consciousness of their victims. This is difficult to do when that consciousness has been exterminated. Thus, Laloux’s film is a provocative foray into the psychology of state-sponsored terror.

Another symbolic element concerns the Traags’ unusual social behaviors. Their odd meditations, bodily contortions, and relatively peaceful existence are all consistent with the ideologies that permeated American society in the 1960s. Their interest in disembodied and displaced consciousness through meditative practices reminds one of the fascination 1960s hippies and social activists found in Buddhist and other Asian philosophies. Frustration with the rigidity of traditional Western religions such as Christianity opened the door for such explorations. The Traags’ bodily contortions are perhaps a direct reference to Yoga practices, another Asian-derived mind-body practice. Additionally, the Traags’ obsession with altered states of consciousness is reflective of this 1960s drug culture and the psychedelic art it produced. In many ways, the Traags’ themselves and the planet they inhabit could be considered a metaphoric hallucination of the entire 1960s social enterprise, one that tried valiantly to promote peaceful social change. It is no coincidence that Fantastic Planet ends with a peaceful resolution between adversarial races. The fact that the Traags and Oms are races and not necessarily nations may also be indicative of the film’s impulse to place civil rights and war on an equal plane. The film argues that peace cannot be obtained without the simultaneous existence of both.

Finally, the animation techniques used in Fantastic Planet are vital in understanding the evolution of global animation trends. The film exemplifies Laloux’s radical theory that extensive movement and character development do not necessarily coincide with metaphorical graphics in animation. While believing that the latter approach was more purely European and the former more American, Laloux was adept in Fantastic Planet at drawing the line between these two competing schools. Throughout, his graphics often resemble Renaissance or medieval gallery paintings. The compositions are often fixed and static, and movement within each frame is minimal at best. The compositions rely primarily on limited foregrounds, juxtaposed against middle grounds with limited action, coupled with backgrounds that contain minimalistic expressionist objects, figures and images. Graphics abound in symbolic imagery, and it is difficult to watch any scene without being aware of its symbolic and metaphorical potential. Historical and political allegories and not characters drive the movie. As the film unfolds, viewers are drawn more to the situations the characters find themselves in than the characters themselves. The film is filled with paper cutout images animated like hand puppets; the hand that eventually kills the mother Om early in the film is a good example. This style has often been associated with Terry Gilliam’s comical Monty Python animations and creates an almost geometric, and therefore rigidly defined, sense of space, unlike the fluid watercolour-like designs of Disney.

Finally, Alain Goraguer’s score resonates closely with avant-garde jazz. The music complements the surreal atmosphere Laloux creates. At times, short displaced chords and riffs, unassociated with extended musical compositions, punctuate the film’s action. At other times, Goraguer breaks out into more extended jams that blend wisps of jazz, funk, and blues. The score is the final piece that completes this cinematic vision. The atonal and at times freakish sounds awaken the viewer, who may find him or herself hypnotised by the unusual animations and politically charged plot.

Fantastic Planet is a must see for fans camped in any school of animation. The film is a fascinating attempt at using a surreal medium and narrative to promote very real political and social concerns.