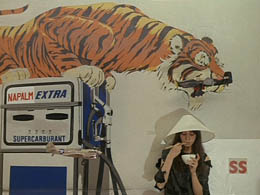 Ollie: We’re just in the nick of time.

Stan: What time is it?

The “Chinoise” of Godard’s title refers to Véronique (Anne Wiazemsky), a bourgeois philosophy student who, with four “comrades” is attempting to apply the tenets of Maoism to her daily life; and to the Cultural Revolution, that heady moment in 1960s China, when Chairman Mao encouraged the young to overthrow his corrupt and Westernising government, a moment that found its most significant external echo in certain French leftist circles.

But in French, “Chinoise” can also mean a kind of nonsense: “c’est du chinois” = “it’s all Greek to me”; “chinoiserie” = “unnecessary complication”. Godard, an inveterate punster, sabotages the didactic thrust of the dialogue with a playfulness alien to its declaimers. Although Colin MacCabe calls it “a masterpiece” (1), La Chinoise tends to be marginalised in discussions of Godard’s work, praised or dismissed, depending on the critic’s political sympathies, as “splendidly attentive” (2) or “a tedious exercise in formalist propaganda” and “alarmingly naïve” (3).

The main claim to fame of La Chinoise is its “prediction” of the student riots that would break out in Paris the following year (and starting in the same university Véronique attends (4)). In 1967, two months before the shooting of the film, Bernardo Bertolucci praised Godard for “his capacity and his ability to live day-to-day, close to things, to live in the world as does a journalist, always aware of the right time to arrive on the scene” (5). Chris Darke refers to the pre-1968 films generally as “a highly personal series of Pop Art news bulletins from 60s Paris” (6). The slogans smeared across the apartment might therefore be seen as literal “writing on the wall” (7).

For Richard Roud, Godard has “adopted almost totally the point of view of his protagonists” (8). Douglas Morrey, however, wonders “how seriously we are to take La Chinoise”? Is Godard “making fun of his young charges”? (9) That this might be children’s fantasy is suggested in an early sequence where Yvonne transcribes radio messages from Radio Peking, mirroring Jean Marais in Cocteau’s Orphée (1949); later one of Mao’s slogans becomes the equivalent of “eeny meeny miny mo” as the cell decides who’ll carry out an assassination; Kirilov’s (Lex de Brujin) rainbow mural suggests a kind of Marxist Montessori.

To understand the basic set-up of La Chinoise, it might help to have some knowledge of 1960s French leftist politics. To the outsider, these can seem like exercises in demented and recondite hair-splitting (in the film, the Nanterre Marxist-Leninists execrate the Sorbonne Marxist-Leninists as “disgusting”, in a scene that may have inspired the Judean Liberation Front’s squabbles in Monty Python’s Life of Brian [Terry Jones, 1979]); relatively accessible introductions can be found in both Colin MacCabe’s Godard: Images, Sound, Politics/Text and his recent biography of Godard (10).

Suffice it to say that Mao’s Little Red Book (a wallet of Communist maxims, multiple copies of which are stacked or littered throughout the apartment the cell has borrowed from parents of rich friends) and the Cultural Revolution were seen as an opportunity for renewing the left after the excesses of Stalinism, returning Communism to its origins in Marx and Lenin. Rather than imposed political correctness from “The Party”, Maoists were encouraged to theorise and experiment, which is what the cell members do in the film (11).

La Chinoise can be seen as marking Godard’s entry into activist filmmaking; he would declare in his next work, Week-end (1967), “Fin du cinéma/fin du monde”, and renounce the commercial cinema for the Dziga-Vertov collective (whose leading figure, Jean-Pierre Gorin, he met while making this film (12)), where he would make films politically, rather than make political films (13).

Godard’s films up to this were always “political”, of course (14) – La Chinoise was preceded by a trilogy (Masculin Féminin, 1966; Made in U.S.A, 1966; and 2 ou 3 choses que je sais d’elle, 1967) that have been called sociological essays, analysing consumer society or the paralysed French Left. Even À bout de souffle (1960), that seemingly carefree remix of Hollywood B-movies, got Godard into trouble for making parallels between his outlaw couple and Presidents de Gaulle and Eisenhower. Also, Le petit soldat (1960), an ambiguous thriller playing out the Algerian War of Independence in Geneva, was banned for three years; Vivre sa vie: film en douze tableaux (1962), utilises government reports; Les Carabiniers (1963), features horrific tableaux of war; Une Femme mariée: suite de fragments d’un film tourné en 1964 (1964) shows “the exploitation of women as an image” (15); Alphaville, une étrange aventure de Lemmy Caution (1965), is a futuristic dystopia set in present day Paris; and Pierrot le fou (1965) skits advertising and the Vietnam War. But these films used a fictional framework derived from Hollywood models, no matter how loosely or satirically applied; the askew “genre” pleasures they offered could make critics and admirers easily overlook their politics (and this continues until today).

La Chinoise climaxes with a plot of sorts – the bungled attempt to murder Soviet commissar (and Nobel Prize-winning novelist) Mikhail Sholokhov – but is closer to a kind of activist, political theatre derived from Brecht (whose name, in the most famous sequence in the film, is the only one not wiped off a blackboard of writers’ names by Guillaume [Jean-Pierre Léaud]). The film comprises six “dialogues”, five between the main characters and an off-screen Godard (somewhat in the manner of Masculin Féminin), and which are really monologues leavened with cod-biographical morsels; the sixth is a long sequence set on a train between Véronique and the philosopher/communist/lecturer Francis Jeanson (16), debating the relative merits of activism and terrorism. These largely static sequences (17) punctuate others in which characters perform daily tasks and activities while discussing theory, or classroom scenes, recalling Bande à part (1964), with oversize pupils here taking turns at playing lecturer.

The monologues are spliced scrapbook-style by all sorts of “interruptions”, some decorative or background noise, others privileged in full-frame, such as photographs and photojournalism, posters, paintings, murals, comic strips, classical music, anthems, pop songs (including one with the unlikely refrain “Mao Mao”), advertising jingles, radio broadcasts, traffic sounds, texts, blocks of colour, “documentary” images, prints, modernist-tribal percussion, games, Situationist slogans and gestures, toy weapons, masks, allegorical tableaux and woodcuts. Although these are often illustrative or didactic, they tend to break the monologic certainties of the characters.

Unlike Vivre sa vie, which supposedly dramatises the entrapment of its heroine, La Chinoise uses limited formal means, eschewing perspectival space (18) in favour of flat compositions against primary colours, repeating a small number of set-ups and textual-aural motifs. Godard takes the experiments with long interior sequences in films like À bout de souffle and Le Mépris (1963) even further, rarely shooting outside apartments or train carriages, restricting the incidental “documentary” pleasures that give the earlier works so much of their spirit.

MacCabe suggests that by the time he came to make La Chinoise, Godard had renounced his earlier cinephilia (19). Yet the use of interiors mentioned above was learned from Nicholas Ray (alluded to at least twice here); while he takes Vincente Minnelli’s melodramatic method of displacing repressed individual emotions onto the décor to comic extremes, illustrating collective neurosis by variations on the colours of the French flag (blue, white and red).

Godard’s ambivalent attitude to the Aden-Arabie cell (20) can be seen in the film’s (his?) treatment of Yvonne (Juliet Berto) (21). For a group volubly committed to revolution and equality (formally represented in the Marxist callisthenics performed on the balcony; or the voiceover slogans enunciated clause at a time by each member), it spends a lot of time patronising, ridiculing and exploiting Yvonne: leaving her with the housework, laughing at her attempts to understand abstruse concepts, physically (and sexually?) abusing her (at one point she is seen in bed with Henri [Michel Sémeniako] sucking her thumb), and relying on her prostitution to support them financially.

I know Godard’s characters aren’t supposed to be read as three-dimensional, psychologically motivated characters, but as Brecht-inspired constructs playing performer and character against one another (22). Nevertheless, in films like Masculin Féminin and 2 ou 3 choses…, it is women who lack political nous, whose bodies/sexuality serve as grand metaphors, who are equated with the natural and eternal rather than intellectual and activist (23). It could be argued that Véronique, with her dogma, bossy condescension and embrace of terrorism is an exception to Godard’s women up to this point (24); but just as the logorhetorical Stephen Daedalus in Joyce’s Portrait of the Artist as a Young Man (1916), can only produce a “little mouse of a poem” (25), so Véronique the intellectual, by a simple inability to read properly, cocks up the political assassination (26).

Roud has called the manner of La Chinoise “quasi eighteenth century, rational, argued, methodical” (27). Two 18th century giants, flash-referenced in the film, point to Godard’s ultimate ambivalence about radical politics. The first is Goethe’s “apprentice” Wilhelm Meister (after whom Léaud’s actor Guillaume is named; in the books, Wilhelm is conflicted between theatre and business), the classic Enlightenment hero of that classic Enlightenment genre, the bildungsroman, in which the (male) protagonist, through a journey of trial and error, progresses to cultural-spiritual maturity. In this way, La Chinoise might narrate the bildungsroman of the Aden-Arabie cell, which, in its apartment/training college/workshop, comes through a series of mistakes and experiments to a practical ideological consciousness, the “first timid step of a long march” with which the film ends.

The second figure might be seen as Goethe’s diabolical other, the Marquis de Sade, whose Misfortunes of Virtue (1791, written four years earlier, just before another revolution) is read, significantly, by Yvonne. In this novel, the (female) protagonist’s journey to cultural-spiritual maturity is viciously foiled by a series of representatives of the ruling classes (landowners, priests, professionals, etc.), who advocate liberty from the constraints of conventional morality, through murder, torture and rape. De Sade’s horrifying picaresque clearly informs Week-end, but does it act here as an (unwitting?) counter to the doctrinal confidence La Chinoise espouses on the surface? The shot that introduces Véronique and Guillaume sets their hands against a flat space, clutching and breaking apart. This push-pull attitude in relation to “progressive” politics (28) is what makes Godard lousy as a demagogue – the film was attacked by mainstream Communists and Maoists – but essential as an artist.