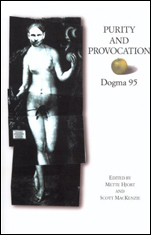 In 1995 the (in)famous Danish director Lars von Trier and the young director Thomas Vinterberg launched a manifesto for filmmaking known as Dogma ’95 and a set of rules – The Vow of Chastity – that had to be obeyed in order to make a certified Dogma film. In the beginning the initiative was considered a provocative joke, but that changed with the appearance of the first Dogma films in 1998, Vinterberg’s The Celebration and von Trier’s The Idiots. The manifesto presented itself as countering “certain tendencies” in the cinema. Basically it pointed to the fact that filmmaking had become a matter of technical and dramatic trickery. Film had lost its relation to true feelings and passions and by that film had also lost its connection with its true masters and itself as an art form. The stories and plots, the manifesto states, are solely made to entertain and the images to be nice looking while the content has been emptied out. Instead the Dogma directors want film to concentrate on the story proper which is to say that a film must give up all the manipulative devices it has at hand. The rules exclude traditional film lightning, props and staging devices; the cinematographer has to shoot on locations where the things needed for the plot’s development are available independently of the filmmaking. And, one of the most discussed rules, the camera has to be handheld which makes the images unfocused and badly composed and gives the films an unsettling, shaky look. The directors furthermore have to abandon all aesthetics – refraining from making a “work” – and give up film’s illusive qualities. The main goal is to force the truth out of setting and characters.

There is an abundance of writing about the Dogma manifesto, the films made in obedience to it, and the uncredited directors. Dogma 95 has generated much hype. Part of the writing has celebrated the anti-establishment renewal of film language and part of it has refused the revolt as a juvenile self-promotion recirculating old ideas as new ones. The discourse surrounding Dogma 95, however, has primarily been journalistic and only sporadic academic writings have been published.

The book Purity and Provocation edited by Mette Hjort and Scott MacKenzie successfully fills the void. The book is organised somewhat indistinctly in three major sections dealing respectively with the origins of the Dogma movement; close analyses of the films; and its subsequent appropriations of Dogma ideas. A fourth section consists of different documents related to the movement.

The introduction by the editors gives a good description of the historical background for Dogma 95 and its launching. Interestingly, the introduction points to the differences between Danish and international Dogma films. Whereas the Danish Dogma films in general have been of a fair standard and attracted a relatively large and more or less mainstream audience, the Dogma films made outside Denmark have been of way lesser quality and have primarily been considered experimental art films addressing a very narrow audience. The problem may be, as von Trier himself indicates, that making a Dogma film is a kind of purification which means that the director (or crew) has to be impure in the first place. Dogma filming is an acid bath for creative and artistic renewal, not a toolbox for getting started. Some young directors have seen Dogma 95 as a short cut to filmmaking in that it legitimises low-budget film and endows it with an artistic aura. In the manifesto, however, one of the problems diagnosed within filmmaking is exactly that it has become too easy to make films: hence the necessity of a “new avant-garde”.

One of the best and most interesting chapters of the book is Mette Hjort’s account of Dogma 95 as “A Small Nation’s Response to Globalisation”. Hjort discusses Dogma 95 from three interrelated points of view: its creative use of self-imposed constraints, its non-nationalist response to globalisation and its aesthetic politics of divergence. What is viable in Dogma 95 is the way in which it negotiates national belonging – whether conceived through identity politics or as artistic tradition – within a larger global community. The proper resistance to globalisation as US cultural imperialism is not a self-protective stance against internationalism but the embrace of an internationalism that insist on diversity in art and cultural expressions. As Hjort puts it in her conclusion: “The renewed internationalism of Dogma 95 aims, then, at a quite different kind of diversity, for it is a matter of fostering, not deep cultural divergence, but aesthetic differentiation as a value in and of itself” (p.45).

What Hjort points to is that small nations’ responses to the aesthetic monoculture of Hollywood may be of different kinds. The Danish film scholar Ib Bondebjerg writes along similar lines in his description of different answers toward globalised filmmaking in Denmark. In his chapter “Dogma 95 and the New Danish Cinema” he sees Dogma ’95 as part of a broader development in Danish cinema. He recognises two very different answers to the threat of Hollywood domination. One answer is to play along, trying to compete with Hollywood by doing something similar as in “post-modern, fast-paced action style cinema often deeply inspired by American genre films”. (p.74). A number of Danish films have done this with some success. But a quite different answer is developing a poetic ‘new realism’ much in the line with the French New Wave. A third answer not mentioned by Bondebjerg but certainly a part of Danish cinema is the continuation of traditional Danish-style cinema not that far from the heritage films mentioned by Hjort.

Bondebjerg’s discussion of the realism involved in a specific film, Italian for Beginners by Lone Scherfig, shows that it is not an easy task to apply the concept of realism analytically to the film. To label the film as realistic is to overlook the overall logic of events in the film which seems motivated more by genre formulas than by realistic character psychology.

Placing Dogma ’95 within a wave of ‘new realism’ or even within ‘realism’ in general, as is done in the majority of chapters in Purity and Provocation, raises more problems than it solves. For what is meant by realism? Is it possible to regard the ‘Dogma film’ as a genre in itself and how does that genre fit into a larger notion of realism? Realism is not mentioned at all in the Dogma ’95 manifesto. Illusions have to be avoided and truth is a goal but does this point toward realism? What I miss in most of the chapters discussing the relation between Dogma ’95 and realism is two things. First a more clear distinction between the intentions put forward by Dogma ’95 and the films made under its auspices. One cannot argue from a specific film to a generalised conception as Paisley Livingston does in his less than convincing chapter “Artistic Self-Reflexivity in The King is Alive and Strass”. To make his point, he relies on the unsubstantiated claim that by ‘illusion’ the Dogma brethren mean ‘fantasy’ and blinds himself to the instances not supporting this interpretation. His claim in the end hinges on a thematic interpretation of the two films in question and has no bearing on the general intentions of the Dogma ’95 movement or on other Dogma films.

Secondly I miss a more thorough examination of the concept of realism and a distinction between different kinds of realisms. Such an examination is begun in the most elaborate chapter dealing with realism, “Naked Films: Dogma and its Limits” by Berys Gaut. He points out that the Dogma rules do not restrict editing of shots or require long takes. And unobtrusive editing and long takes are indispensable within realism according to André Bazin, one of the major theorists of realism in film. However, Gaut also claims that the goal for realism is to show the world as it really is – a statement I find very dubious.

This academic discussion of realism and its relation to Dogma ’95 should not obscure the fact that Purity and Provocation is a very good and enriching book. Peter Schepelern shows convincingly that Dogma ’95 is closely connected to von Trier’s ludic aesthetics – always playing with self-imposed rules in his filmmaking. Matin Roberts has an insightful discussion of the Dogma brethren’s D-Day-project – a multi-screen television program handling four independent but interweaving plotlines on four different TV channels and filmed in real time. The relation to Dogma ’95 is not overwhelming but nevertheless his analysis is fascinating and eye-opening. Implementing the very useful concepts of “metaculture” and “counter-publicity”, Mette Hjort in her second chapter shows how different discourses about Dogma ’95 and related subjects have generated an oppositional aesthetic understanding of new possibilities within a dominant global culture.The book offers different takes on the Dogma phenomenon and is a very good introduction to a movement originating from some very confusing rules and incoherent aesthetic ideas.