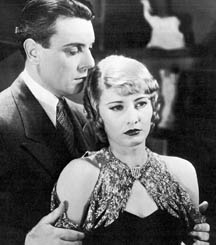 Notorious for being one of the films which hastened the stricter enforcement of the Production Code in 1934, Baby Face was also one of the first to be pulled from theatres when those restrictions finally went into full effect. The fast-paced, raw story of a woman who uses sex to increase her wealth and power still has the ability to shock. Now with a newly discovered, longer print from the Library of Congress, Darryl Zanuck’s bold statement takes on a different and clearer dimension.

Barbara Stanwyck is Lily Powers, a bootlegger’s daughter. Her father pushes her to offer sexual favours with the beer she serves to the factory workers who frequent his speakeasy. When he dies in a still explosion, she watches with numb fascination, neither happy nor sad to finally be rid of him. Taking the advice of the local cobbler, the only man in town who values her mind over her body, she hops a train to New York with her maid, in search of a better life. There she picks a high-rise she likes and seduces her way from the office boy in the personnel department all the way up to the president in his penthouse suite.

Advancing is Lily’s only occupation. She ignores her female co-workers and reads up on etiquette between seductions, perfecting the mask of innocence she wears in the presence of men. Always quietly alert, she grabs opportunities to make increasingly powerful conquests with cool efficiency. Her sexual victories are illustrated with an amusing camera pan up the outside of the building, accompanied by the sultry sound of St. Louis Blues. When a jilted lover kills Lily’s latest conquest before committing suicide, she calmly accepts the carnage as an occupational hazard. In fact, she never doubts her methods, whatever the results, until she marries the bank president, and realises almost too late that she loves him.

The newly discovered print, longer by five minutes than the commonly circulated version, shows small, but significant changes in atmosphere and tone. Library of Congress curator Michael Mashon uncovered the print during the summer of 2004, while fulfilling a rental request for the film. He looked at the two copies of the film that the library owned and noticed the difference in length between them. “It was a moment that archivists live for”, he said. “I knew in the first five minutes that this version was different. I can’t begin to describe the sheer joy of discovery, the feeling that I may have been the first person since 1933 to see Baby Face uncut.” (1) The film he saw was a version that was rejected by the New York state censorship board months before an edited print was approved for release. The new discovery premiered at the London Film Festival – a logical choice as the Festival’s planning committee had made the request which inspired the discovery.

For the most part, the cuts were made to remove salacious content – such as a slow panning shot of Lily’s legs or a leering politician grabbing her breasts. These were the kind of risqué scenes that brought the Code into full effect, and given the climate of the time, it is not surprising that they were removed. Somewhat more unusual is the way the Board and Hollywood’s Studio Relations Committee (SRC, another censorship group) changed the tone of the film by altering her cobbler mentor’s advice.

In the two versions of the conversation Lily has with the cobbler before she leaves town, it is possible to understand how the changing of a few lines could dramatically affect the meaning of a film. In the initial version, the cobbler insists that Lily use men without hesitation:

A woman, young, beautiful like you, can get anything she wants in the world. Because you have power over men. But you must use men, not let them use you. You must be a master, not a slave. Look here – Nietzsche says, “All life, no matter how we idealize it, is nothing more nor less than exploitation”. That’s what I’m telling you. Exploit yourself. Go to some big city where you will find opportunities. Use men! Be strong! Defiant! Use men to get the things you want! (2)

As rewritten by Joseph Breen of the SRC, the cobbler’s words were injected with a morality which diluted and dramatically altered his intended message (edited text in italics):

A woman, young, beautiful, like you are, can get anything she wants in the world. But there is a right way and a wrong way. Remember, the price of the wrong way is too great. Go to some big city where you will find opportunities. Don’t let people mislead you. You must be a master, not a slave. Be clean, be strong, defiant, and you will be a success. (3)

Breen’s lines were dubbed into shots framed over the cobbler’s shoulder, in insertion which is clearly noticeable in the final film. In a later scene, the cobbler is supposed to send Lily Nietzsche’s Thoughts Out of Season to celebrate her victory over the men who once exploited her. In the edited version, he instead scolds her in his letter for gaining power “the wrong way”, and the title of the book is never revealed.

Whatever the results of the tug of war between censors, studio and producer, Stanwyck’s performance would have been, and is, the most powerful element of Baby Face. Without her, even the racy content wouldn’t have done much to liven up the awkward dialogue and limp supporting cast. Lily is like a simmering cauldron, on the verge of boiling over. When she explodes, her measured cool turns to hurt rage. She destroys lives, but only because life destroyed her first. The censors may have thought that Lily needed to be punished for her actions, but Stanwyck shows the futility of forcing penance on a woman who is so emotionally damaged that she no longer wants anything more out of life than material comfort.