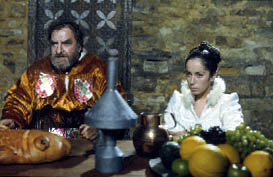 This adaptation of Chaucer’s renowned collection of stories was the second film in what Pasolini came to call his “Trilogy of Life,” a cinematic triptych which he had begun a year earlier with Il Decameron (1970), a sexually-explicit and visually-sumptuous rendition of Boccaccio’s equally famous collection of short stories, and which he would conclude three years later with Il fiore di mille e una notte (1974), a similarly mesmerising adaptation of stories from The Thousand and One Nights.

Given the very difficult and provocative films that Pasolini had been injecting into the highly-charged political atmosphere of the late 1960s in Italy – ideologically-confronting and “indigestible” film-essays like Teorema (Theorem, 1968) and Porcile (Pigsty, 1969) – this trilogy of colourful and highly-palatable films was interpreted by many as signaling Pasolini’s abandonment of his self-appointed role as intellectual gadfly and agent provocateur of the Italian bourgeoisie, a renunciation that must have seemed amply confirmed by the ending of The Canterbury Tales where Pasolini himself, in the guise of Geoffrey Chaucer, writes on the screen: “Here end the Canterbury Tales, told for the mere pleasure of their telling,” and then adds “Amen”. Later on, however, contrary as ever, Pasolini would vigorously maintain that, easy as they were on the eye, the films of the Trilogy were, in a sense, the most “ideological” of his career. (1) For the guiding principle of the Trilogy, he claimed, was the celebration of Life in all its physicality and carnality, an exaltation which the films carried out through a sort of carnival of the primitive, desiring human body as it instinctually contested and joyously transgressed the repressive limits imposed by religious and bourgeois morality. Pasolini thus turned the all-too-predictable charge of having played too much on the sexual elements in the original stories into a defence. As he repeatedly attempted to explain in interviews, the sex and the naked bodies had been precisely the point of the films; and it had been the critics who had missed it! Having struggled so hard to eliminate the sex from the films, he said, many critics had found them empty of content, completely losing sight of the fact that the films’ content was right there, on the screen, in that huge prick above their heads which they tried so hard not to understand. (2)

Pasolini was not, of course, the only director to use explicit sex as a tool of ideological provocation during this period; one only needs to remember that Bertolucci’s Last Tango in Paris (1972) was also released during this time. But Pasolini’s romantic, even, one might say, reactionary belief in the primitive, instinctual body as the touchstone of reality, as the only possible point of resistance in the rising tide of inauthenticity and de-sacralisation unleashed by consumer capitalism mainly through the power of television, soon imploded. (3) For, in fact, whatever provocation or challenge to bourgeois morality Pasolini may have originally intended in the Trilogy’s paean to sexuality and the naked body, was soon effectively neutralised by both the films’ overwhelming popularity at the box-office and by the dozens of cheap soft-porn imitations spawned by their success. By 1975, profoundly disillusioned by the realisation of the impossibility of any effective way of resisting the spread of what he called cultural “massification” – and already at work on Salò o le giornate di Sodoma where the human body far from being “celebrated” is put quite literally on the rack – Pasolini issued a recantation of the Trilogy and of its “ideology.” He didn’t regret having tried to represent what he believed was the reality of innocent bodies in their most authentic sexual being, he declared, but at this point, given the way in which even explicit depictions of sexuality had become appropriated and integrated into mainstream consumer culture, he had to admit defeat and thus “abjure” his earlier position. (4)

But leaving such ideological considerations aside and coming to The Canterbury Tales itself, one has to admit that, in spite of winning the Golden Bear at Berlin in 1972, the film appeared then, and has remained, something of the poor cousin of the Trilogy, never achieving either the same critical acclaim nor popularity of the other two films. At worst, in fact, it’s been judged a lifeless sequel and a “re-mastication,” as one Italian critic put it, of the much more successful and striking adaptation of Il Decameron. At best, even if told for the sheer pleasure of storytelling, these stories nevertheless seem condemned to an inability to present the pulse of Life without attracting, everywhere, the silent but insistent presence of Death itself.

Pasolini offered different explanations for what he himself admitted was the least accomplished film of the Trilogy. On a personal level, he said, he had been going through a great deal of unhappiness at the time and some of that sense of suffering and existential anguish had inevitably seeped into the film. At another level, he maintained, it was the world of Chaucer itself which was darker and gloomier than the sunny Italian climes of Il Decameron and the film’s muted tones accurately reflected its more pessimistic ethos. Whatever the ultimate validity of these explanations it’s nevertheless undeniable that, despite all the surface braggadocio and the sometimes forced sense of fun, in this film Eros is inexorably stalked by Thanatos, so that, despite its middle place in the Trilogy of Life, the film ultimately appears more a meditation on the ubiquity of Death.

In between the full-frontal sex that had also characterised the Decameron there are patches of humour, of course, and the Cook’s Tale – no more than a fragment in Chaucer’s original – is expanded into a ten minute homage to Chaplin and American silent comedy. The figurative models of Brueghel and Bosch are also invoked to good visual effect and perhaps there’s even an allusion to Antonello Da Messina in Pasolini’s recreation of Chaucer’s study. Nevertheless, for my own part, I must confess that what has always remained with me of this film is the speech of the old man in the Pardonner’s Tale to the three young thugs who approach and berate him as they roam around searching for “Traitor Death” who “stole” their friend.

“I’ve wandered even as far as India,” he says, “and found no-one who would exchange their youth for my old age. Poor wretch, I go about the world and morning and night beat the earth with my staff and I ask my Mother Earth, ‘O Mother, do let me in. When will my bones have their eternal rest? Mother, I’d give all I have for that shroud that envelops you beneath the ground.’ But still she will not grant me this grace.”

The words are there in Chaucer’s original, of course, but the sentiment has always seemed to me to be Pasolini’s own presentiment of death. In the end, it seems difficult not to agree with those critics who have suggested that the film has much closer affinities with the Death rattle of Salò than with the other two exuberant and Life-affirming films of the Trilogy.