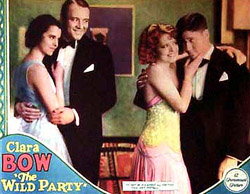 The Wild Party has earned a place in film history primarily for the technical advances it represents. It was both the first talkie produced by Paramount Studios and to be directed by Dorothy Arzner. It was also the first time that Clara Bow, the studio’s most popular actress, spoke onscreen.

While pioneering efforts are rarely graceful, this lightweight story of young flappers at a women’s college has more to recommend it than just historical interest. For one, although Bow’s line readings were awkward the first time around, her melancholy and melodious voice added new complexity to her exuberant screen image. The film also had an unusually feminine point of view. In a 1927 interview, Arzner said, “Try as man may, he will never get the woman’s viewpoint in telling certain stories” (1). She proves her point through the remarkably close and vaguely sensual female relationships in the film.

Bow plays Stella, the wildest and most popular student in school. She and her fellow classmates are mostly biding their time until marriage. They lounge around in negligees, filing their nails and discussing men. The exception is Helen (Shirley O’Hara), a serious-minded, though well-loved, student towards whom Stella feels particularly protective.

Life at the college changes dramatically when James “Gil” Gilmore (Fredric March), the new anthropology teacher, arrives. His romance with Stella, and his role in saving her from a group of rape-minded drunks at a roadhouse, sets in motion a series of incidents which, thanks to the meddling of a jealous student, cause scandal at the college.

Technically, The Wild Party is as uneasy as just about every other film produced in that turbulent year of adjustment to sound. The actors over-enunciate their dialogue for the microphones, and as a result, sound as if they are working out the meaning of their lines, syllable by syllable. March is the only actor whose performance seems entirely crafted for sound, instead of mostly adapted from the silent movie style. Still, despite the quaver in her voice and a false breeziness with her lines, Bow proved that she was capable of making the transition to sound.

It was the second time Arzner had directed Bow (they had also worked together on the silent Get Your Man in 1927). At first, Bow had been reluctant to accept a female director on that production. After all, that meant one less man on the set, a real problem for the frisky actress. However, it was not long before she came to respect Arzner. The director was thus well-suited to guide the terrified actress in her first speaking role.

It was a formidable task. The pressure on Bow to deliver in her sound debut was monstrous. With her insecurities about having to memorise lines, her slight stammer and Brooklyn accent, she was often inconsolable. Now that she had to stay within range of the microphone, she could not frolic around the set in the way that had made her famous. That restriction made the challenge of speaking dialogue even more daunting.

In order to help the troubled actress, Arzner and her crew were innovative in their placement and disguise of microphones. Arzner and a technician attached a microphone to a fishing rod and hung it over the stage, a set-up which restored some of Bow’s physical freedom. That invention, now called the boom mike, is still widely used today. Arzner only had to keep Bow from raising her eyes to stare fearfully at the microphone as she spoke.

Bow’s off-screen problems translated to the film. From her first line, her voice shakes and her nerves are evident. However, her warm, varied voice was well-suited for sound. If she could have modified the broad pantomime at which she was so adept, she could have comfortably made the transition into a long sound career. She didn’t feel able to abandon that style though, and Arzner adapted by giving her long close-ups. It was a smart move, as these “silent” shots are Bow’s most effective moments in the film.

Technicalities aside, the remarkably sensual and loyal relationships among the female students are among the most memorable elements of the film. With arms around each other while intensely gazing into each other’s eyes, their moments in the dorm room are practically romantic. They have their minds on men, but they also appreciate and are willing to fight for each other, as is evident when a spiteful and jealous student tries to jeopardise Stella and Helen’s futures.

Their support of each other is solid. Going against the convention of female rivalry in films, the catty girl is the odd one out; the rest of them are inclined to be generous to other women. They are wary of just about everyone outside their circle, including men. Though they are young, and don’t quite understand the potency of their allure, they are already aware of the differences between a good man and a randy college boy.

They also understand the significantly more intense dangers of a leering drunk. When Helen struggles to push away an overly amorous frat boy at a party, her friends step in to save her. Their rescue is light-hearted; they gleefully twirl him around until he passes out, dizzy, at the base of a tree. Though they are serious about protecting each other, they are also the “Flaming Youth” and don’t see any sense in stopping the fun.

In the end, it didn’t matter what The Wild Party was about or how good it was. The film broke cinema box-office records because Bow’s devoted fans wanted to hear her speak (2). Though they liked what they heard, she not only couldn’t adjust to the demands of sound, but also became mentally and physically exhausted. She would struggle through nine more films before retiring from the screen in 1933.

After directing actresses such as Joan Crawford, Katherine Hepburn and Rosalind Russell in some of the most fascinating performances of their careers, Arzner retired from filmmaking in 1943, when a case of pneumonia almost killed her. She would still occasionally work; there was a radio show and she made short films for the Women’s Army Corps during World War II. Francis Ford Coppola was amongst her students when she taught film classes at UCLA in her later years.

For Fredric March, this first lead role was the doorway to many other great parts (including three more for Arzner); he would go on to win an Oscar and enjoy a highly acclaimed career. In fact, he was the only actor in the film (aside from Jack Oakie, perhaps) who was on the verge of greater things.

Aside from the innovations it explores, The Wild Party is ultimately an awkward, but entertaining portrait of the naiveté and spirit of the flapper girl and the excitement and pitfalls of the increasingly fast-paced society rushing around her.