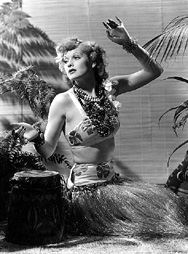 This jaunty RKO musical, which took “a severe drubbing from reviewers and audiences alike” (1) on release, was directed by Dorothy Arzner, and has been reclaimed over the years as a film of relevance to the feminist movement.

It stars Lucille Ball (that firm favourite of television comedy who eventually bought out RKO, appearing in a rare leading role after a lengthy apprenticeship in films such as Roberta, 1935); Maureen O’Hara (who had made an impact the year before in William Dieterle’s The Hunchback of Notre Dame, 1939); Louis Hayward (a South-African born protégé of Noel Coward, previously seen in British quota quickies and as The Saint in New York, 1938, and married to another key woman film director, Ida Lupino); and Ralph Bellamy (a reliable if colourless character actor, who made a memorable appearance in Howard Hawks’ screwball comedy His Girl Friday, 1940, with Cary Grant and Rosalind Russell). Rounding out the cast are Mary Carlisle (as the shy and quiet member of the dance troupe, Sally), Virginia Field (sparky as Hayward’s estranged wife), and Maria Ouspenskaya (as the mentor who notices Judy [Maureen O’Hara] dancing in her secret “starlight” and realises her real talent).

Dance, Girl, Dance is taken from an original story by Grand Hotel author Vicki Baum, and concerns a group of ambitious dancers led by Bubbles (Ball), whose chief talents lie in her transient appeal to men; and Judy, a dreamer who wants to learn the ballet, finds herself as a stooge in burlesque, and who chrysalises into a feminist icon by the film’s end, a true “movie Amazon” (2).

Like Vicki Baum’s earlier original story for Grand Hotel, Dance, Girl, Dance puts memorable and strong female characters on the screen with hopes, dreams, and aspirations – in the earlier film Greta Garbo played Grusinskaya, the Russian ballerina with romance in her heart (echoed both by the innocence and fantasy of Judy; and her older mentor, the mannish Madame Basilova); while Joan Crawford played a chiselling stenographer who collected men like flypaper. There is also the charming but hopeless rich man – while in Grand Hotel it was John Barrymore playing a Baron, in Dance, Girl, Dance, it is Louis Hayward as Jimmie, a momentary distraction for both Bubbles and Judy.

Dance, Girl, Dance is a milestone in the dance film and musical, despite its B-movie production values (featuring lots of back projection). Key sequences which demand critical attention include Judy’s attempt to be a hula dancer, stunningly upstaged by the sexy wiggles of Bubbles, and the burlesque routine which gives Bubbles her biggest chance to shine, “Mother, What Do I Do Now?” Hollywood also shows us classical ballet, with an extended routine choreographed by Steve Adams (Bellamy) – relying on the assumption that classical ballet/high art is not as appealing as good old low-down burlesque, regardless of how much money and talent is thrown into the “art” pot. While it may have made use of the resources from Fred and Ginger’s RKO musicals, the ballet sequence looks flat against the earthy sexiness of Bubbles’ hula dance.

Judy’s most stunning set piece, a speech near the end berating the men who go to watch strippers on the burlesque stage, could be considered as a barbed attack on the movie audience – after all, part of the Hollywood myth was the objectification of women, and despite Arzner’s input, Dance, Girl, Dance is as guilty of this as any other film of the period. Romance is provided by the playboy, Jimmie, who meets the girls and steals Judy’s heart before rejecting her for having blue eyes. Hard-hearted Bubbles accepts a toy figure of Ferdinand the Bull (product placement for Disney – RKO distributed their early cartoons) from Jimmie, which eventually passes to Judy who idolises it with the idealistic passion of a teenager.

Dance, Girl, Dance could be classed as high camp, but it has much more to offer than this implies. Although Arzner’s experience with musicals was limited (she had only co-directed Paramount on Parade, 1930) she made the film work. Coming to the project late, after Roy Del Ruth (known for his MGM musicals with Eleanor Powell such as Born to Dance, 1936) pulled out, she ensured the film was tightly directed and gave the finished product considerable power. However, Dance, Girl, Dance was her penultimate film.

It is interesting to note where Dance, Girl, Dance falls within Arzner’s career. It follows such films as Christopher Strong (1933, which propelled Katharine Hepburn into her run as “box-office poison”) and Craig’s Wife (a 1936 vehicle for feisty Rosalind Russell, later remade with Joan Crawford). On the whole, Arzner truly “thought outside of the box” (3) and deserves her status as one of the most important (if also one of a very small number) women film directors of the studio system.

Dance, Girl, Dance works best for me as a girl buddy-movie, a bit of flotsam within a rich heritage of similar works. It can be compared favourably with such films as the Gold Diggers series (1929–1938), and Stage Door (1937, also featuring Lucille Ball), and it is clear that the true dynamic is between the girls who work together. It has even been suggested in a recent study that the friendship between the girls suggests “a possible rapprochement between high and low art forms” (4). The men – although their roles are cleverly written and cast – are really on the periphery; Jimmie Harris for his money, Steve Adams for his connections. They are instrumental to the fates of Bubbles and Judy, but the women can survive on their own two feet without them.

The film succeeds because of its sheer charm and attention to detail; we can understand perfectly how it feels to sleep in a room of the type rented to chorus girls, how seeing a ballet performance can fuel the ambitions of one of their number. It is also a kind of fairytale where Judy is the good princess and Bubbles the wicked witch, although the ending isn’t brought about by masculine intervention, but by sheer determination and self-faith.