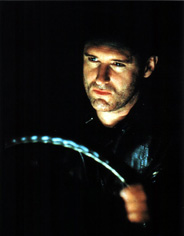 Lost Highway begins on the road. It is one of those trips where you are travelling a bit too fast, driving blind at night, the sensation of slightly out of control speed causing an adrenalin induced anxiety with a touch of vertigo until David Bowie’s dulcet tones kick into Trent Reznor’s up-tempo percussive theme (1). You can construct an entire cinematic history of that Mojave Desert drive between Los Angeles and Las Vegas, a place hostile and dangerous for human bodies. At every eventful narrative turn, Lynch shows that all of his characters are on potent trajectories along that blind drive, a world where the most inconsequential manoeuvre, thing, or action can result in physical violence and death.

Lost Highway was filmed over a 54-day period, often extending late into the early hours (2). Images and noises develop throughout the film as though they are pulled out of the blackness of the 3:00am ether. The sounds and visuals ripple and gurgle atop the screen’s velvet surface, ultimately looking something like the paintings Lynch did through the 1990s. With film sets constructed using furniture designed by Lynch, every part of this film resonates with an attention to consumerist detail. Every strand of fabric in the costumes, every glob of grease in the make-up, every crunch of a car’s gearbox, contributes a materiality to the film that performs its own, tacit critique of the characters and their actions.

Lynch seems to force his characters to see their own caricatured selves reflected in the reactions of others, a theme common to all of his work to date. Made with a cast that engages multiple strands of the genetic legacies of Hollywood, Lost Highway plays the classic noir parlour game of the search for identity within tightly mediated circumstances (3). For example, I certainly think of vampiric metaphors when observing actor Patricia Arquette’s seductively full mouth of slightly vampiric teeth, making her double femme fatale/Alice in Wonderland turn into something like an American version of André Breton’s Nadja (1928) (4). A simple statement like Nadja’s classic opening line, “Who am I?”, moves beyond its surrealist/noir frame to become a dissipated, vain grasp for the particles of reality moving past us (5). Ultimately, mirrored reflections of characters in the film function like Méliès movies, offering up trick photography as expositions of the dearly departed, the ghouls of our mediated cultural identities. Lynch’s tableau noir engages the uncertainty of characters, the instability of life, the violence, the sexual energy represented on screen as a continual movement, or flux. As in Alan Parker’s Angel Heart (1987), which combines noir with the supernatural occult, there is a sense that we are searching for the identity of the main character throughout the whole film. Parker, however, explains his character through a series of flashbacks and a final climactic scene where he tragically acknowledges his “true” identity. Lost Highway offers no such narrative relief; there is no “founding moment” to which the origin of the disturbance of personality can be traced. In Lost Highway, identity is a bare existence dependent upon a circumstantial environment within a socially mediated culture.

Guiding Lost Highway are the insular, formalised worlds of human relationships, rendered through the spatial domain of surveillance interactivities. These include the human provinces of recognition, recollection, déjà vu, and intuition, the mechanical spheres of the mirror, the telephone, the video camera, the motor vehicle, and the supernatural realms of the historical surrealists, the unheimlich, the inexplicable. Surveillance in every form imaginable in Lost Highway becomes the agency of evil, directing base impulses, and driving interactions with elements perhaps otherwise outside of a character’s domain or understanding. When questioned whether or not he owns a video camera, the character of the “sax-man”, Fred Madison (Bill Pullman), replies “no”, “I want to remember things my way – not necessarily the way they happened”. We can appreciate this claim as a feeble attempt to claim some temporal ground in the physics of existence through the (false) belief in a subjective agency. The sensory consumption of information and things does not count in this world’s ruthless stakes for control. Fred is not interested in what film implies materially – the recorded end result – rather he is more interested in the process of remembrance itself. This is a crucial Godard-like step taken by Lynch and co-writer Barry Gifford, reminding us as viewers not to fasten our cinematic attention on the narrative’s result, but to attend to the process of making the loop itself – so that the endless transformations and continual dilation of each subject’s “duration” are not overlooked.

Lynch achieves this communication of intense situations through two strategies: first, by presenting his now trademark flourishes of elements of vernacular reality (normativity signalled by a white picket fence placed within the U. S. suburban-scape), and second, by using the subtextual dimensions of the soundtrack. The realism of any given screen world is generated and maintained as the product of relationships within a system. Lynch’s system is one which gives different signs a particular value within the system, and then jumbles them up, confuses them, so that they read differently at different times. It’s like reading the signals from someone you love. At certain times, the same signal means different things, but because you understand the system, or the whole to which they belong, it’s OK – at least most of the time. From Twin Peaks (1990-1991) we learned to cringe when the telephone rang, or when we saw a shot of a humming ceiling fan – both turned out to be signals of impending danger, of communicating, generating, and transmitting danger, or deception. The whole of the L.A. world in Lost Highway acts as a normative injection to the instability of narrative events. A shot of the beauty of the sunset over a desert sky is held long enough for us to admire and relax a little; the crumbling white edges of the newish concrete stairs up to Fred and Renee’s front door indicating how long they have lived there. Allowing this type of production value to remain in shot is one of Lynch’s strategies for narrative binding through the framework of the vernacular. Sound-image becomes fact in Lynch’s cinema as his characters assume the classic realist acting technique of establishing and sustaining a sensory contact with objects, an approach that was honed in Twin Peaks. For example, Twin Peaks’ Agent Cooper (Kyle MacLachlan) in is grounded by his character’s infamous cherry pie tasting, and small-town coffee connoisseurship, and the relationship he builds with his own technology for recording “the events”, through frequent asides to his hand-held tape recorder, whom he addresses as “Diane”.

Inserting a catch which makes us pay attention to the differences and quirks of each character on offer in Lost Highway – Pete’s kooky parents (wonderfully played by Lucy Butler and Gary Busey in matching high-waisted denims), the prison guard who pragmatically comments, “Captain – This is some spooky shit we got here” – results in a humanising of time. By directing attention to each character’s attitude, the film builds an understanding of subjectivity based on temporal factors. We understand by the end of the film, that like Buñuel’s use of the dream-within-a-dream narrative, there have been multiple temporal planes built up to create the final scene’s repeated morphing of subjectivity.

In Lost Highway, Lynch uses sound to build emotion and create symbolic collisions. The dialogue is sparse, quiet at times, amplified at others, while orchestral pieces of music frame the use of technology in the film – for example, the phone rings twice accompanied by mood building music, and the surveillance videotapes use their own white noise with music “mood builders”. There is also Fred’s own created musical sound (although when he remembers it, there is no sound), the film’s use of the radio, and its complex gothic soundtrack.

Lynch was the sound designer of Lost Highway, and worked with long time collaborator, Angelo Badalamenti to compose the original score for the film. Just as they did for Blue Velvet (1986), Lynch and Badalamenti travelled to Prague to record part of the score with the Prague Film Symphony Orchestra (to get that authentic old-Euro sound), with Lynch effecting distortion by plugging the recording cables into long thin strips of PVC pipe channelled through a large empty Chianti wine bottle. Back in the L.A. mixing room, Badalamenti and Lynch mashed the orchestral music with other sounds. Ultimately, the film is carefully edited, with the texture of noises swelling up and punctuating sites of action and reaction on screen (6).

Lost Highway offers a key in the register of the Lynchian world – a bridge to access the mise en scènic dimensional shift between his cult-hit television series Twin Peaks, its movie double, Twin Peaks: Fire Walk with Me (1992), and the larger scale of human consumptive excesses of the TV-pilot turned feature film, Mulholland Dr. (2001). In the Lynchian world, abstracted and magnified forms and sounds are positioned to express the idea behind the narrative – not to “explain” or “ascribe” a meaning for or of the film, but to simply express the idea – the rest is left up to the subjective interpretation of the viewer.