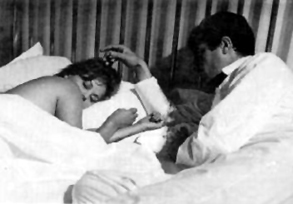 Mauro Bolognini (b. 1922) is largely known in Italy for his numerous movies made on less than prestigious budgets for the domestic market. Working as a craftsman and later as an assistant to Luigi Zampa, Bolognini began his directing career in the early 1950s. Switching from comedies, Bolognini soon secured his place in the tradition of literary adaptations deeply rooted in Italian film production (1). Bolognini’s penchant for adapting the literary works of Italian writers such as Vitaliano Brancati, Alberto Moravia and Italo Svevo provided a canvas for his “cultivated feeling for the visual characteristics of Italian cities” and a window for showcasing an “astuteness in the cinematic reconstruction of time lost” (2). Such traits led the film critic Pietro Bianchi to label him “the most Proustian among Italian directors” (3). Bolognini’s unwillingness to impose his own vision or his own personality on his works may have led to a degree of critical neglect, even within Italy, for his impressive tally of over 40 films. In films like La notte brava (1959) and La giornata balorda (1960), the director navigates the lower depths of the Roman shanty towns, while in L’Eredità Ferramonti (1976), starring Anthony Quinn, Bolognini recaptures the Rome of 1888. Outside Italy and France, any reference to Bolognini will probably be in connection to Pier Paolo Pasolini, whose novels critics claim he “transcribed” to the screen (4). Pasolini wrote the scripts for five of Bolognini’s movies, including the adaptation of Vitaliano Brancati’s novel which became the script for Bolognini’s masterpiece, Il Bell’Antonio.

Il Bell’Antonio is a tragicomic examination of sexual impotence. Marcello Mastroianni plays Antonio Magnano, a handsome jock blessed with the problems of a “Don Juan”. But hovering precariously over Antonio’s magnetic effect on women is the fact that he his sexually impotent. After amassing notoriety in Rome, a conflicted Antonio returns home to Catania where tales and gossip of his sexual exploits have taken on mythic proportions. His bombastic father, Alfio Magnano (Pierre Brasseur) and mother, Rosaria (Rina Morelli), unaware of their son’s problem, push for him to marry the notary’s beautiful daughter, Barbara Puglisi (Claudia Cardinale). Knowing what this means, Antonio hesitates, but then stumbles across Barbara’s picture, falls in love, and agrees to the marriage. After a year goes by, Antonio’s secret is soon exposed and Barbara’s father gets the church to annul the marriage on the basis of their failure to respect the will of God. Barbara is soon married off to the Duke of Bronte. Meanwhile the Magnano family watch their lives take a spiral; their pride shattered by the gossip about Antonio’s impotence. Alfio, in an effort to prove his manhood, dies from heart failure in the arms of a prostitute. A light soon shines at the end of the tunnel when the maid, Santuzza (Patrizia Bini), is found to be pregnant with Antonio’s child. At the film’s end Bolognini places a somewhat vindicated Antonio in front of a mirror and tracks in on his reflection as Edoardo (Tomas Milian) congratulates him on becoming a man; at which point the focus is softened and Antonio’s reflection is superimposed on the wall behind, helping to equate conformity with normality (5).

A connection between the complex sexuality of southern Italian males and the mentality of Fascism is a theme in Brancati’s novel (6). But in simplifying Brancati’s theme by connecting virility to economic, social, and political power, Bolognini gives Il Bell’Antonio a structural force and inner logic that navigates the audience through the corridors of an Italian patriarchal stronghold, where men are only the size of their sexual myths. For Antonio however, his assumed virility automatically infers his power on the political tier. Bolognini depicts the distance of Antonio’s subjectivity from the hegemonic masculinity expected of him through interactions between Antonio and his reflection in the mirror. Antonio’s bombastic father, who boasts about being made the Fascist federale of Catania for being able to sleep with nine women, expects Antonio to embrace his patriarchal heritage. Antonio, on the other hand, vacillates around a male subjectivity already torn from its sexuality; in other words, he exhibits a subjectivity torn from masculinity (7).

The common claims made about Bolognini’s direction providing a “calligraphic style” as opposed to a unique authorial expressivity doesn’t hold true for Il Bell’Antonio (8). But even with the skills of the cinematographer Armando Nannuzzi, Bolognini is still no Jean Renoir. Bolognini’s style consists of numerous establishing shots from which the camera tracks in at an “eavesdropping” pace. However, in Il Bell’Antonio the director achieves a cinematic fragmentation of masculine subjectivity in a rare and special way. Bolognini shows that Antonio can project his fear of social emasculation by having him question the virility of a newly elected official at a party. Antonio can also project love; somewhat clouded by his need to be accepted for who he is. He projects this love onto a picture of Barbara whom he hasn’t even met. Gazing up from the picture, Antonio suddenly turns to catch a look of himself looking at himself in the mirror. Bolognini begins to show us the “schizophrenic” split already at work in Antonio’s identity. This mirror scene is later recalled in the scene after the Puglisi funeral when Antonio looks into the camera, intentionally breaking the “fourth wall”.

François Truffaut claimed that, “The cinema becomes subjective when the actor’s gaze meets that of the audience” (9). Bolognini breaks the common verisimilitude of narrative space to depict, cinematically, Antonio’s subjective state. After the funeral of Barbara’s grandfather, Antonio crosses the street and gazes into the camera at “us” as though “we” are standing across the street beyond the camera. By acknowledging the camera in this way, Antonio opens the door to the part of his masculinity which, in spite of its impotence, is in desperate need of acceptance (10). The door also opens onto our own subjectivity and we realise that Antonio is pleading to fall into our world or the world of any new symbolic order that will accept him for what he is. Through this subjective camera, Bolognini shows the audience that Antonio is aware that his coming marriage to Barbara is a step of faith into a theoretical nothingness, a means by which to find a different order of signification from the one in which he is trapped.

Other sequences using this subjective camera include that showing Antonio’s run after learning that the news of his impotence has reached his parents. Earlier tracking-shots of Antonio arriving in Catania impose the calm and handsome Mastroianni on the sexual iconography of the city; phallic buildings, long dark streets and corridors, and oval shaped gateways. But during his desperate run along those same streets to Mr. Puglisi’s office nothing holds up the world inside the frame. As the camera tracks along, Bolognini and Nannuzzi allow the lens to flare, emphasising Antonio’s dizzy spell; the realisation that his faith in a new symbolic order, as well as his hopes to escape patriarchy, have imploded upon him. Antonio, who has for a long time being impotent and was treated as a Herculean symbol of manhood, has betrayed his patriarchal lineage. Bolognini drops a hint of this in Mr. Puglisi’s refusal to bring any cigars to his talk with Alfio to break the news about Antonio’s impotence. However, Il Bell’Antonio is subconsciously about the return to the mother. After the opening credits, Antonio’s first words in the film are to Rosaria as he walks up to the family apartment. The return of Antonio to the Oedipus complex is not sado-masochistic in nature (11), but rather it is symbolic of the fact that motherhood is the only order that will neither judge nor condemn him for what he is.

Bolognini starts Il Bell’Antonio with an opening scene reminiscent of a film that came out the year before its release, Alain Resnais’ Hiroshima mon amour (1959). Cutting from a mirror shot to Antonio and his lover on a bed, the director sets up the theme of multiplicity, and also the return to the mirror in the final shot of the film. According to Witcombe, “This cyclical device is a favorite item in Bolognini’s visual repertoire” (12). This circular frame can also be seen as symbolic of Bolognini’s cinematic restraint from all forms of authorial intrusion, which at times can be as nerve racking to watch as the slow crawl of one of his “eavesdropping” dolly ins. The women in Il Bell’Antonio are also eavesdroppers. For example, Barbara learns of Antonio’s impotence by pretending to be already aware of it, and when Antonio starts to elaborate, she lets him make the mistake of assuming Francesa (Maria Luisa Crescenzi) had already told her all about it in the garden. The mothers also eavesdrop on the patriarchal unravelling, and although underlining their belonging to a different symbolic order through their willingness to accept Antonio for what he is, Bolognini implicates women as a whole for their role in perpetuating the mythical foundations of patriarchy. After all is said and done, Mauro Bolognini’s film is not “calligraphy”. Il Bell’Antonio is cinema.