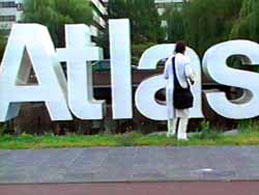 Art is always a witness, sometimes a witness to events before they actually occur.

In Public Lighting Mike Hoolboom rehashes the form of the “exquisite corpse” to illuminate biography. This is a disembodied, luminescent corpse shot through with text and writing, a corpse in which “every wound gives off its own light and some of these wounds are words” (2). The cadaver has been sliced into seven parts or chapters: “Writing”, “In the City”, “Glass”, “Hey Madonna”, “Tradition”, “Hiro”, and “Amy”. Sitting at the video’s curatorial head, “Writing” sets up six biographies, six different voices, syntax, personalities: “I follow thoughts that don’t seem to belong to me, that don’t belong to my life. I call them public lighting.” (3)

Inside the open body of this film we stitch our own wounds and “pull out” our own rabbits. In its stories, Public Lighting reflects the fragmented immediacy of living, its inconsistencies and dead-ends, and scours those places where we can place our own dread and dreaming. In this we can follow Hoolboom’s lead:

While I’m hardly in a position to ask for her (Madonna’s) pictures, I feel that they surround me, I don’t need to find them. When I look out they are already there, looking back at me. They’re already my pictures, part of how I imagine the world (like the tree which grows in front of my building, the newspaper boxes perched on the corner). (4)

These six singular, personal voices are not always as easy to pin down as the expectations of the film’s opening salvos would suggest. “In the City” recalls the delivery and swagger of the mourning prose of Frank’s Cock (1994). In “Glass”, Hoolboom’s scrolling text shows us how to take musician Philip Glass’ obsessive work to the sublime. “Hey Madonna” mischievously re-processes the pop star’s narcissism back onto her own image. “Tradition” plays out the forgetting of the new as the handmaiden of the corporate and materialist tsunami engulfing traditional China. “Hiro” reveals the cloud of Hiroshima as wound within a sleepless Japanese man’s nocturnal body. “Amy” introduces a pre-pubescent girl’s abducted image as a contrast to Madonna’s adult flaunting.

The current and deficient janus-like body that is mapped by these “voices” is a space straining to construct the personal, jammed up against the forces of globalisation that have infected it. Hoolboom inhabits a “panic terrain” that positions him as the heir to a rich legacy of first person cinema and visual storytelling nourished in Canada by the likes of Jack Chambers, Al Razutis, Arthur Lipsett, Phillip Hoffman, Barbara Sternberg, Michael Snow, Joyce Weiland, David Rimmer, Patricia Gruben, and so on. It can be seen as part of a project responding to George Grant’s plea: “only in listening for the intimations of deprival can we live critically in that dynamo” (5). Hoolboom, this project’s latest, resilient reincarnation, is in sync with the writings of panic theoretician Arthur Kroker:

We (Arthur Kroker and Michael A. Weinstein) like the notion of over identifying with the feared and desired object, to such a point of obsession that you begin to take a bath in its acid juices. You travel so deeply and quickly in cyber culture that you force it to do things it never wanted to. (6)

We are knocking uneasily at the door of Bataille’s “sacred excess” here, an uncomfortable realm suggested by the shadowy figure of Jock who stalks “Amy”’s story. “And beneath the forgetting, there is only the scribbling of another Bataille, another vomiting of flavourless blood, another heterogeneity of excess to mark the upturned orb of the pineal eye.” (7)

Hoolboom’s eclectic approach in Public Lighting lets him plunder everything, including his own work. The short film Hey Madonna (1999) is recycled as the central chapter. This modular approach to film production is reminiscent of Al Razutis’ Amerika, constructed from a series of short films made between 1972 and 1983.

In “Glass” archival or “found” footage of the city is combined with Philip Glass’ music, while the subtitled text drives the narrative: “This boy showed me how to have a personality. Each day he resisted the flattery of imitation we face as shoppers.” This mode of storytelling is also employed by Jay Rosenblatt’s King of the Jews (2000). “Glass” acts as an ode to repetition, the loop, the small moment so pervasive in digital media production, whose final, end-zone modularity is the pixel itself. “Glass”’s stuttering notes also invoke the “repeating” film frame, flickering at 24-frames-a-second. Now receding from consciousness and view, it is still embedded in the new.

Hoolboom bears witness to a combination of old and new, enabling the reconstitution of a historically and critically aware present. He takes us into the territory of Arthur Lipsett’s N-Zone (1970) (8), now marked by Kroker’s “pure aestheticisation of experience” and the “recombinant commodity form”:

We talk about the recombinant commodity form, in an economy run by the biological logic of cloning, displacing and re-sequencing. Or virtualized exchange, the replacement of a consumer culture by the desire to simply disappear, from shopping to turning your body into a brand name sign. (9)

Through his recombinant editing acumen (hyper-collage) Hoolboom has managed to bring us back something of ourselves. Is this the future or is there a “hole in the bucket”?