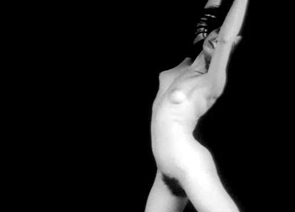 Bruce Conner, painter, sculptor, provocateur – he garnered thousands of votes for city-wide office in San Francisco after making lengthy speeches that consisted entirely of dessert names – has made around two dozen short films since 1958. Most combine stock footage (such as educational films warning against the dangers of tooth decay, Bible story recreations, animated Ford Motor Company adverts, home movies of water-skiing mishaps) with soundtracks that either provide emotional counterpoint (see A Movie [1958], Conner’s first and most famous short) or reinforce the assembled films’ visual rhythms (see Take the 5:10 to Dreamland…[1977] and Valse Triste [1978] and, for me his best work, Breakaway).

The five-minute Breakaway shows Antonia Christina Basilotta (Toni Basil) shimmy, tease, gyrate, and luxuriate in various states of undress. The music, Ed Cobb’s “Breakaway”, the B-side of Basilotta’s first single, is a throaty pop-tune with low-brow mid-’60s “lib” lyrics (“I’m gonna break away from all the chains that bind, and everyday I’ll wear what I want and do what suits me fine”), a cross between Nancy Sinatra and Martha and the Vandellas. The song lasts two minutes and 30 seconds, after which the entire short, picture and soundtrack, runs backwards to the beginning.

Conner’s work has been subjected to all kinds of critical interpretation: judgments like “Conner’s fecundity emerges from a deeply observed dualistic understanding of phenomenal reality, and what on the surface appear to be cantankerously arbitrary assaults on convention are in truth the result of friction between those conventions and a complex and consistent world-view”, though difficult to slog through, typify the consensus (1). But Conner himself rejects political and philosophical analysis of his films. “When I talk about [them]”, he told Scott MacDonald in 1981, “I talk about the process I went through making them, or the way they affect other people” (2).

In Breakaway that process was, for Conner, atypical. Instead of assembling found footage, Conner shot the film himself, on 16mm black-and-white stock, using what looks like at least a 5:1 zoom. Formally, the short consists of six segments, each with its own visual strategy, the six roughly coinciding with the song’s intro, verse, chorus, verse, chorus, and outro.

The 20-second intro lays out the tools – speed, tone, image size, angle – with which Conner creates his visual music. Basilotta, in black cut-out leotards, and in frontal full shots, “speed-poses” (the static camera running at about eight frames per second) in front of a black backdrop. Conner strobes each hi-speed, high contrast quarter-second clip of Basilotta with black frames and orders his shots of the dancer to achieve maximum bodily displacement pose to pose (for example, crouching down in one shot, stretching up in the next). Though all of this is energetic, for Conner it’s the set-up for the even more dynamic moments he’ll achieve through contrast with this starting point.

A big jolt in image size signals the start of the first verse. Basilotta now dons a white slip. Her Dionysian dancing, together with the lens’ quick zooming from medium shot to extreme close-up and back, means her body and face careen in and out of the frame. As a result the tonal contrast – from nearly completely white frames (her slightly overexposed face, her slip) to black frames (the background, when she leaves the frame) – is more pronounced than before. The camera, still frontal, continues to run at a low frame rate and thus, combined with the zoom, causes the image to smear abstractly.

The second verse is even more aggressive. There, Conner edits for contrast of costume – Basilotta is seen in black panties and no top, then white slip, then black t-shirt, then topless again, then in gray underwear, etc. – and intercuts focused and unfocused takes. He even includes footage “spoiled” by laboratory markings and edge fog to increase the visual intensity.

But Conner saves his biggest filmic bangs for “Breakaway”’s choruses’ lyrical and musical climaxes. In the first chorus’ last shot Basilotta blows the camera a kiss then caresses herself. This shot commands attention in three ways. First, its uninterrupted nearly six-second duration distinguishes it from the quick-cutting of the film so far. The viewer, now, is allowed to focus on a single continuous action. Second, the shot is captured at 24 frames per second instead of some lesser frame rate. The suddenly normal flow of Basilotta’s image, combined with her equally suddenly unhurried sensuality, stands out in a sea of high-speed frenetic dancing. Finally, this moment marks the first time one of Breakaway‘s shots (this pairing of Conner’s relatively slow zoom-in then zoom-out and Basilotta’s kiss and caress) seems intentionally synched to the music’s melody and beat.

Conner similarly emphasises “Breakaway”’s second chorus. There, the filmmaker shoots the now completely naked Basilotta’s balletic leaping at 36 frames per second (slow-motion). And he finally varies his camera position, presenting her body in profile, the only non-frontal images of the movie.

Breakaway plays out like a visual symphony. A prototype for the best (but still, lesser) contemporary formalist music videos, like Peter Care’s “What’s the Frequency, Kenneth?” and “Drive” (both for REM), Conner’s movie is an experiment in the visual language of film. But no matter how powerful a formal analysis of his filmmaking process may be in suggesting how Conner’s rhythms affect us, there is much in Breakaway – in Basilotta’s brash and unbridled self-assertiveness, in Conner’s feverish camera style, and even in the uncomplicated honesty of Cobb’s catchy lyrics and tune – that defies verbalisation… and must simply be loved!