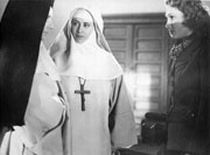 Robert Bresson’s first feature, Les Anges du péché is a fascinating film, both intrinsically and in its relation to the rest of Bresson’s oeuvre. The script, fashioned by Bresson in collaboration with the Dominican priest Raymond Bruckberger and the noted playwright Jean Giraudoux, concerns the Sisters of Bethany, an order of nuns devoted to working with female ex-convicts. The film’s protagonist is a well-to-do young woman, Anne-Marie (Renée Faure), who joins the order out of a passionate sense of mission. On a prison visit with the prioress, she meets an inmate named Thérèse (Jany Holt), who rebels continually against her unjust confinement for theft. Upon her release Thérèse kills the man responsible for her imprisonment, and takes refuge in the convent. Here Anne-Marie tries to effect Thérèse’s spiritual transformation, but her obsession intensifies Thérèse’s resentment and jeopardizes her relations with her fellow nuns. For her disruption of convent life Anne-Marie is expelled, but secretly returns nightly to pray at the tomb of her order’s founder. When she becomes deathly ill, she is discovered and readmitted to the fold; and, upon her death, Thérèse undergoes a change of heart, delivering herself to the police and to her just punishment.

In one scene, each nun receives at random a maxim which constitutes a particular spiritual instruction, and is an emblem of her particular destiny. Anne-Marie’s is a quotation from St. Catherine of Siena: “If you hear the word that ties you to another human being, do not listen to any others that follow—they are merely its echo.” As in Pickpocket (1959), in Les Anges Bresson traces the “long route” by which such a tie may lead to redemption. Anne-Marie’s project of saving Thérèse, conceived before she even meets her, ultimately succeeds but only via a tortuous path: Thérèse’s revenge for false imprisonment with real murder, Anne-Marie’s disruption of and expulsion from her order, her alienation, even torment of Thérèse, and ultimately her own death. This route to Anne-Marie’s saintly fulfilment and Thérèse’s transformation passes through continually ambiguous terrain, in which will, destiny, and chance become indistinguishable, and in which saintliness and criminality not only work side by side but mingle: as Roland Barthes observes, “Throughout the film, we have felt that Good was not so separate from Evil, that between these two powers there were certain espousals, so to speak, which united them to the point of creating a homogenous substance, as in life itself.” (1) Bresson touches here on an ambiguity that one finds in later films: where does sin meet sanctity? The sinful arrogance of Anne-Marie is also the agent of her achievement; guilt makes Thérèse’s redemption possible. Bresson leaves precise ascription of motive or nature open, making everything resonant with implication: a lovely example is the moment in which Anne-Marie gives Thérèse a kiss in the prison, and Thérèse apparently unconsciously wipes her brow. Has her temperature risen from Anne-Marie’s kiss, in some recognition of its erotic or spiritual undertones? Or does it merely register fatigue at pushing her soup cart?

One finds in Les Anges another characteristically Bressonian paradox, namely the proximity of liberation and imprisonment. It is Thérèse’s return to prison that marks her liberation from hatred; it is Anne-Marie’s love for the world that leads her to renounce it. (The theme of discipline and imprisonment is not only characteristic of such later Bresson films as Un Condamné à mort s’est échappé [1956], however, but is of the film’s time. In a useful essay, Tony Pipolo observes that the nuns’ rescue of an ex-convict from her old associates resembles a Resistance operation; (2) although, by contrast, Raymond Durgnat suggests that the film is actually not far from Pétainist values. (3))

Thematically characteristic though it is, Les Anges remains unquestionably more conventional than Bresson’s later work. It is talkier, more eloquent, than the later films, which tend to neutralize dialogue in favor of more specifically filmic rhetoric (elliptical editing, for example). In keeping with this, the acting style is also distant from Bresson’s later requirements: with Les Dames du Bois de Boulogne (1945), Les Anges is one of Bresson’s two features to use professional actors, who offer performances far more expressive and “actorly” than can be found in the impassive downward glances of the later films. This was a source of serious dissatisfaction to Bresson, who in his Notes would caution himself against drawing “tears from the public with the tears of your models” instead of “with this image rather than that one, this sound rather than that one, exactly in their place;” (4) but I find the performances beautiful. Surely Faure’s bright, warm eyes and proud gaiety are indelible, and Holt is wonderfully sullen and subterranean.

In addition, Les Anges is visually lusher than later Bresson: as in Les Dames, cinematographer Philippe Agostini favors rich blacks and luminous whites, creating images that seem almost opulent next to the more muted contrasts of the films photographed by L.-H. Burel or Ghislain Cloquet, or the hard surfaces of a late film like L’Argent (1983). Also, the film score is far more obtrusive than Bresson would later tolerate: he would later write that “Music takes up all the room and gives no increased value to the image to which it is added.” (5) Whereas the late films allow no non-diegetic music, and those between Un Condamné and Une Femme douce (1969) permit only severe punctuations by classical or baroque pieces, Les Anges features a relatively abundant score by Jean-Jacques Grünenwald (who also wrote the music for Les Dames and Le Journal d’un curé de campagne [1951]), which gives the film what Keith Reader suggests is a sulpicien, or kitschy religious, quality. (6) For my part, I like the music very much, such as the offbeat determination of the march that opens and closes the film, and the poignant melody and modulations as Anne-Marie tearfully burns the photographs that still connect her to her past.

However distant from his later work it may be, Les Anges du péché remains not only recognizably a Bresson film, but one of great power. I imagine that few will forget, for example, its final sequence: underscored by Grünenwald’s effective music, shifting here from orchestra to the authoritative unanimity and religious overtones of the organ, Bresson’s camera tracks Thérèse’s hands into the waiting manacles of the police in a filmic gesture of absolute precision and expressive force.