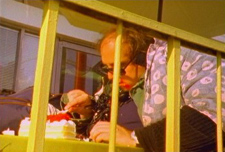 Last year, New York DVD distributor Plexifilm released its first title – John Palmer and David Weisman’s Ciao, Manhattan, starring Warhol superstar and junkie disaster, Edie Sedgwick. One of the more disastrously odd underground films of the early ’70s, Ciao, Manhattan undoubtedly looked avant-garde in 1972. Thirty years later, it’s a time capsule. It’s not a great – or even a good – film. But it’s fascinating nonetheless as a document of what the underground used to look like, and how it has developed formally, even while staying essentially the same.

Ciao, Manhattan was relatively cheap to make, but everyone involved had plenty to spend. And it shows, if only in the bearing of everyone who plays in this extended home movie. Because that’s essentially what it is. Warhol himself always maintained an ironic detachment, which lent his films an icy anthropological quality. Not so here. The filmmakers are so dim (or stoned) that irony acquires scare quotes, and they end up making the movie that Corman was parodying. And still it’s great fun, if you can stomach it.

Story? Forget it. It’s a fucked-up Edie, and a lot of stuff going on around her. But the contrast between the incredibly sexy gamine she was in 1967 and the slurry wreck she was just four years later is made painfully apparent. Supposedly she was acting. Maybe so, but I’m tempted to conclude that Edie managed to play a convincing brain-dead doper the easy way. It’s a hell of a comedown: Vogue magazine to “living” in an empty LA swimming pool in four years, 27 looking 40, with your tits flopping all over and slurring like a Bowery bum.

So, underground film is no stranger to grim squalor. But Chicago-based James Fotopoulos takes it to new extremes. Bleak parables of suburban anomie, his films play like stories copied from the police blotter. Their subject matter is echt-underground: an ugly America of alcoholics, psychotics, two-bit crooks, pornographers, strippers and just plain creepy losers. But Fotopoulos’ ultra-austere style transforms his films from underground movies into something quite different.

At 26, the astonishingly prolific Fotopoulos has finished six features and a blizzard of shorts, in a remarkable variety of styles, from minimal narrative to pseudo-documentary to near abstraction. But despite good press – including a Film Comment profile – and festival screenings, until recently his films have been difficult to see. Luckily, Facets Video just released his first three features – Zero (1997), Migrating Forms (1999) and Back Against the Wall (2000) – on DVD.

There’s nothing flashy about a Fotopoulos film. He tends to prefer long, static takes, and generally shoots in murky black and white. The most minimal have the feel of surveillance footage, endlessly cycling, waiting for something to happen. Most underground directors treat sordid misery as a pretext for lots of eventful excitement. Fotopoulos does without much in the way of plot, let alone drama. He even minimizes the pointless violence, focusing instead on the grinding tedium that breeds and surrounds it. But while his films can be rough going at first, they gradually deepen into a curiously metaphysical timelessness.

Fotopoulos scored his first big success with Migrating Forms, which won the best feature award at the New York Underground Film Festival (NYUFF) in 2000. Something like an Edgar Ulmer-directed version of Chantal Akerman’s Je Tu Il Elle, it’s easily the bleakest underground feature in years. A man meets a woman for sex in his tiny, Spartan apartment, then sees her off. Over and over again. Each time she arrives, the ugly cyst on her back gets larger and larger, but the man doesn’t seem to notice. They hardly speak, just drink water and smoke, then have sex. Then the woman stops coming, and the man starts to grow a similar cyst.

But Migrating Forms is less a story than the elaboration of an existential metaphor. Fotopoulos posits that while people cannot actually communicate with one another, they still somehow infect the lives of their partners. And he literalizes this pathological relationship by turning it into a physical parasite. In order to represent the paradox of souls brushing up against one another, like ships colliding in the vastness of the ocean, he affixes the ugly consequence to the surface of the bodies they inhabit.

The most recent of the Facets releases, Back Against The Wall, is Fotopoulos’ most conventional narrative to date. It follows June – a Chicago-area lingerie “model” – as she gradually drifts into some kind of creepy criminal porno ring. The film is broken into three parts, distinguished by the guy June is living with: Levey, an emotionless middle-aged epileptic who mechanically reads piles of books; a slimy pimp; and Ed, a grotesquely obese, literally neckless alcoholic. Not exactly sanguine about the human condition, Back Against the Wall doesn’t allow for much in the way of human charity. And yet it still suggests the potential for redemption in the pure, animal instinct to survive, at all costs. Not until June is reduced to nothing, the image of a walking corpse, can she admit the depths of degradation she’s entered, and begin to struggle free of them.

Christopher Jolly’s wanly peculiar Curse of the Seven Jackals (2000) also won best feature at the NYUFF, in 2001, the year after Migrating Forms. At first impression, the two films have a lot in common: long takes, minimal cutting, sparse dialogue, and hermetic plot. But despite their formal affinities, Fotopoulos and Jolly arrived there by way of very different paths. And that’s probably got something to do with their relative success. While Fotopoulos’ bleak existentialism feels like underground filmmaking, Jolly’s wry, almost wistful humanism is something else entirely, and entirely unexpected.

If anything, Curse of the Seven Jackals is stylistically even more raw and wildly anachronistic than Migrating Forms. Jolly shot half of Curse of the Seven Jackals with a ’60s-vintage Auricon sound-on-film newsreel camera, and the other half with a silent Bolex, then ran the Bolex footage through the capped Auricon to record wild sound. The result resembles a Paul Morrissey film actually directed – rather than “presented” – by Andy Warhol.

Nominally the story of a man driven mad when he receives transfusions of “synthetic blood” in a medical experiment, Curse of the Seven Jackals spends as little time as possible worrying about its ostensible plot. In fact, without the catalog description as an aid, it’d be tough to make out exactly what’s going on plot-wise. Still, it’s plenty plain that the better part of the film in fact concerns the awkward semi-courtship of Bernard and Helen, and has nothing whatsoever to do with any medical experiment gone awry.

And that’s the key to its success. Like Morrissey, Jolly isn’t interested in the horror film genre per se, but rather in the normative quandaries that horror films express better than any others. But their respective solutions to those quandaries are very different. Morrissey’s Warhol-sponsored films used vestigial horror-film themes to frame the social milieu of the Factory crowd. But where Morrissey’s take on his subjects was harshly critical, casting them as nihilistic narcissists, Jolly is much gentler and more humanistic. Morrissey populates his films with amoral monsters. Jolly’s tragicomic heroes are hopelessly, touchingly neurotic, desperately trying to engage with the world that surrounds them. 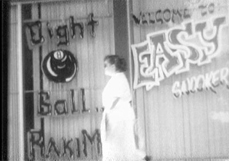 Set primarily in a dilapidated motel, a bingo parlor and a karaoke bar, Curse of the Seven Jackals haunts some of the loneliest rooms in Athens, Georgia. There’s nothing so solitary as an activity calculated to substitute for community. It’s an easy mark for snickering cynicism. But Jolly chooses wistful pathos instead. Bingo tournaments are the apotheosis of social solitude. But smack in the middle of an inexorable 360-degree pan of a stark cafeteria filled with stupefied bingo players, Bernard and Helen cheerfully discuss their game. Neither has anything in particular to say, but at that moment they are purely human, speaking directly to each other without artifice of any kind; and suddenly the distinction between story and reality simply disappears. In the ’60s, films like David Holzman’s Diary were narratives in the style of a documentary; in a way, Curse of the Seven Jackals is a documentary in the style of a narrative. Rather than contriving its truth, it contrives its artifice.

Directors like Fotopoulos and Jolly are unusual, but not totally unexpected. Others – like Damon Packard – are utterly inexplicable. Packard’s Reflections of Evil (2001) is easily the most peculiar film I’ve seen in ages. When a friend from LA initially described it to me, I thought he was joking. No joke. Apparently, Packard came into a pot of money, enough to make a two and half hour feature. Replete with face-twisting special effects, pyrotechnics, slo-mo girls in nighties, gallons of fake vomit, mountains of supermarket pastries and sugar cereal, a “creature” made out of old walkie-talkies, ’70s movie references and Packard himself endlessly tramping through LA, Reflections of Evil is the casino buffet of underground films: eight meals in one.

Actually, the better part of the film consists of Packard, cursorily transformed into an obese psychotic, walking up and down Hollywood Boulevard trying to sell five-dollar watches to everyone he sees, while cursing like a Tourette’s patient and stopping for screaming matches with street people. But then there are the painfully awkward lunches with mom (at one of LA’s coolest Jewish delis). And Spielberg send-ups, including a “flashback” sequence of a youthful Stevie instructing a blasé union-type crew how to throw dummies around for his arty movie. Not to mention a very funny “intro” by Tony Curtis, extolling Packard’s achievements, and way-too-sexy ad for the Serta Perfect Sleeper mattress.

Still, there’s a lot of dead air. For every brilliant sequence there are 15 meandering minutes. But Reflections of Evil isn’t trying to be friendly. Basically, it’s an autobiographical horror film. He’s willing to joke about it, but so far as Damon Packard is concerned, the entire world is out to get him. Mom is a sadistic harpy, browbeating him for his compulsive gorging. The police are thugs, delighting in purposefully tormenting him. The neighbors are psychotic, living to scream at him out the window or gun him down in the street. The city is a jungle populated by monsters, itching to sic their dogs on him or rip his throat out. Even the landscape seems malicious, the sky itself ready to beat him down, one more time. In other words, Packard cranks the persecution-meter to new heights. Sometimes it’s funny, other times it’s just ridiculous.

And that’s consistent with Packard’s preferred tone of wounded persecution. He’s the kind of guy who prefers failure to success, because he can get all he wants. According to the “press release” he included with the DVD of Reflections of Evil (and the website, www.reflectionsofevil.com, where you can order a copy for USD$10), he’s distributed 29,000 copies. I don’t believe a word of it. But I wouldn’t put it past him either. And he’s willing to run with it. Frankly, Reflections of Evil reminded me just a hair of Christopher Maclaine’s epochal beat film The End (1963), in that it turns failure into an aesthetic, and finds its success there.

In an odd way, it’s got a lot in common with Ciao, Manhattan – both are perfect disasters. No matter what genre they start in, they end as slapstick melodramas. It’s like taking the last ten minutes of a Peter Sellers movie and distending it into an entire feature. The tacky pathos once undercut by goofing returns, and turns plaintive. It’s not tragedy, it’s disaster. But it’s a human disaster nonetheless, moving by way of pity, if nothing else.