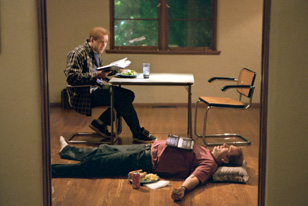 Adaptation (Spike Jonze, 2002), like Being John Malkovich (Spike Jonze, 1999), gets plenty of points for originality. Charlie Kaufman, the screenwriter and, by general consensus, the driving creative force behind both films, is nothing if not clever. Having dragged Hollywood into post-modernity (finally) with the earlier film, a self-reflexive investigation into the cult of celebrity, he’s now taken the logical next step of turning his attention towards the creative process (his own and others’). Faced with the challenge of adapting Susan Orlean’s The Orchid Thief (Ballantine Books, 2000) into a movie, Kaufman chose instead to dramatize his own struggle to do so. Despite its ambitions and originality, Adaptation (like the earlier film) is more successful as an entertainment than as a truly inspired and substantive work. It is certainly a headier, fresher entertainment than its competition. But in the context of the effusive praise it’s received, it’s worth pointing out its limitations, the extent to which it tinkers with Hollywood conventions without ever truly subverting them – its subversive noises are more bark than bite.

In dramatizing his own struggle to adapt The Orchid Thief, Kaufman has first of all split himself into two characters, identical twins Charlie and Donald Kaufman (Nicholas Cage in a dual performance), the former a successful screenwriter, but a nervous, insecure, overweight wreck, determined to avoid all the pitfalls of Hollywood convention; the other just as poorly endowed, but an unselfconscious, seemingly unself-aware amateur writer, who not only embraces these conventions but is blessed with an internalized mastery of them (to further blur the line between reality and “reality”, the non-existent Donald shares a screenwriting credit on the film). As Charlie battles writer’s block and agonizes over finding a fresh, honest way to adapt his source, Donald effortlessly produces an apparently awful, derivative Hollywood thriller (“Silence of the Lambs meets Psycho”) which the industry immediately gobbles up.

In counterpoint to this portrait of a screenwriter (or writers), Kaufman sets in motion the story of Susan Orlean (Meryl Streep) and her experience researching and writing The Orchid Thief. In a sense, the real “story”, the plot, of Adaptation lies here, in the developing relationship between Orlean and her subject, an orchid thief named John Laroche (Chris Cooper). One of the craftiest things about Adaptation is the extent to which Kaufman does manage to adapt the book to the screen (although I can only guess at this, not having read it myself). The Orchid Thief is, after all, a work of journalism – going by the evidence of the passages included within the film it’s essentially the story of its own creation. So Kaufman is taking no liberties by making a character out of Orlean herself, and his adaptation of her book is by all appearances relatively faithful. The liberty he takes is to allow himself free rein in imagining her mental and emotional life and in extending her story past the publication of the book.

It’s when these two opposing strands collide that the most interesting, startling moment of Adaptation occurs. For all the complexity and headache-inducing confusion of the movie’s relationship to its own conception and creation, to outside reality, Adaptation only truly breaks any rules at that almost imperceptible moment when its own reality changes. About two thirds of the way through, after we’ve become accustomed to the film’s unfamiliar but stable topography, it shifts ground, throwing us off balance. Having dramatized Charlie’s and Donald’s opposing attitudes towards Hollywood conventions, the movie, without fanfare, morphs into precisely the kind of thing Charlie is so anxious to avoid. Suddenly Orlean has become a drug addict, Charlie and Donald are taken hostage, guns come into play, an alligator appears as a deus ex machina – with little warning, Adaptation has changed from a Charlie movie into a Donald movie.

The problem though is that it’s never really been a Charlie movie. Through his stand-in character, Kaufman voices his criticism of the clichés and conventions of most mainstream Hollywood filmmaking, but he never really challenges those conventions on the ground. From scene to scene, whether Charlie is having a panic attack before his agent, clamming up with the object of his affection, or unsuccessfully flirting with a waitress, the movie feels as familiarly false, as over-determined, and as lacking in a genuine understanding of people and the way they communicate, as any Hollywood film. This may well be intentional – Kaufman’s aim may be to criticize convention by embodying it. But it’s a strategy that robs the third-act reality shift of much of its power. And intentional or not, Adaptation is a safer film for never daring to break through into a kind of filmmaking that offers a true alternative to customary middlebrow entertainment.

That said, there’s plenty to like in Adaptation, thanks to Kaufman’s skill in introducing the different strands of his story, and in drawing them, slowly but surely, together; and to Spike Jonze’s admirably blank, self-effacing direction (although his work in Malkovich made more of an aesthetic of its ordinariness). And the performances are very strong. If Cage doesn’t quite return to the inspired form of his Raising Arizona (Joel and Ethan Coen, 1987) and Vampire’s Kiss (Robert Bierman, 1989) years – he seems more like a star acting ugly and pitiful than like the real thing – he at least seems human again, and he does a wonderful job of distinguishing, ever so slightly, between Charlie and Donald (whose seamless co-existence on-screen is a technical marvel). Brian Cox hilariously embodies real-life screenwriting guru Robert McKee. And Chris Cooper and Streep do wonders with their side of the story. Cooper’s Laroche is a fine comic creation, uncouth but soulful, and Streep, usually such an earnest, self-congratulatory actress, shows an unexpected spontaneity in a role that gives her plenty of room to show her range – it’s hard to imagine any other actress so effortlessly negotiating the passage from sensitive New Yorker writer to gun-toting drug addict.

But Adaptation pretends to have more up its sleeve than strong storytelling and fine performances. It is, after all, the opposition between Charlie’s attitude towards movies and Donald’s that is the primary subject of the film. As difficult as it is to criticize something like Adaptation, to assert anything that isn’t included within the film on some level, there does seem to be a kind of resolution, and a simplistic, dubious one at that. The movie becomes a sort of personal journey in which Charlie comes to reconcile his own attitude towards movies with his brother’s – he learns how to stop worrying and love to compromise (Donald dies only to be absorbed into Charlie), a transformation Kaufman makes palatable only by portraying Donald as much more appealing and healthy than Charlie. 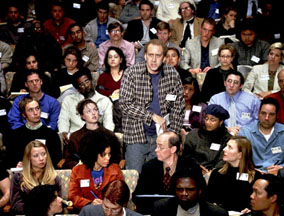 When he finally relents to Donald’s advice and sits in on McKee’s seminar, Charlie asks the great man what to do when writing a script in which nothing happens, a script free of high drama or phony character development, and the response is a steady stream of abuse (to the effect that, if you can’t find drama in a world full of war and love and betrayal, you’re helpless). Charlie is moved, realizing that he rejects drama or change only because he’s too cowardly to act in his own life. This may be a resonant theme on a personal level, but from my own perspective, as one who shares the pre-McKee Charlie’s conviction that there’s something profoundly false about most movies’ conception of drama and character development, it seems suspiciously like an evasion. This is, after all, a movie about writing movies – equating Charlie’s insecurity and timidity to his determination to be true to lived experience in his writing distorts the issue. It’s not that there’s no drama or change in life; it’s that Hollywood has developed a way of representing reality that makes it palatable and simplistic, that stifles ambiguity, complexity, and contradiction.

The disappointing thing about Adaptation, for all its promise and intelligence, is that despite its self-consciousness and inventiveness it seems to share with so many pedestrian films a determination to answer questions rather than simply raise them, to choose some kind of concrete ending rather than a radical openness. Compare Adaptation to something like Abbas Kiarostami’s Close-Up (1990) (not such a stretch), and you see the difference between a film that blurs the boundaries between reality and fiction in a truly provocative, challenging, open-ended way, and one that co-opts and tames Kiarostami’s approach. There’s no urgency to Adaptation, no sense of anything truly at stake – even at its most sincere, it seems calculated to produce effects rather than encourage thought or feeling. It’s a sign of the lack of a truly healthy alternative American cinema that someone as creative and apparently adventurous as Charlie Kaufman ultimately plays by the rules; bend them though he may.