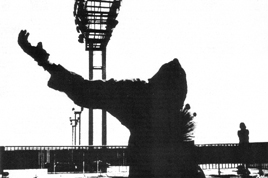 But first of all he looked for the woman’s face, at the end of the jetty. He ran toward her. And when he recognized the man who had trailed him since the underground camp, he understood there was no way to escape Time, and that this moment he had been granted to watch as a child, which had never ceased to obsess him, was the moment of his own death.

The conflation of time, the beginning and the end, the past, present and future, the loss of individual control before overwhelmingly great, inexorable forces … Sounds like the stuff of science-fiction or perhaps even an apocalypse…but contemporary times? It certainly wasn’t our intention to release Issue 25 of Senses of Cinema in the midst of war. And the last thing we encourage is distraction from the current state of affairs by way of what some may claim as ‘inconsequential’ readings on films, directors, movements and so on. As writers, editors, readers and so on, we all bear responsibility to take a position on the current situation, to acknowledge the acts of aggression and violence carried out in the name of peace and democracy, international stability and security. Senses of Cinema‘s anti-war position should hardly surprise our readers. From the very beginning, the magazine has adopted an anti-imperialist, pluralist and democratic stance: promoting independent, alternative, underground films and filmmakers over mainstream ones; placing established and emerging writers side-by-side; considering cinemas from all over the world and refusing the dominance of mainstream American cinema and its values. In short, Senses of Cinema has strived to occupy a position in the world of information, news and analysis that is alternative, that admits to the complexity and multiplicities of experience, identity, and reality.

This is hardly the forum for political analysis, however, increasingly mainstream media, including television, cinema, advertising, and journalism, has come to bear the same characteristics in terms of representation and rhetoric as ruling governments such as the United States and Australia. Both portray the world in the simplest of terms, good vs. bad, both are built on cultural stereotypes, both deny difference or the other: the refugee, the dislocated, the immigrant, the poor, the unemployed, the perverse and so on. Strangely enough, these ruling governments claim to speak for their countries; and their claim to democracy and peace is a flagrant lie when their ultimate interests are economic, strategic, and imperialist. Meanwhile less money is spent on social welfare, community projects, education and the arts, and more on defence, surveillance and security.

Politics and ethics infuse every aspect of our lives, and the ability to show an honest appreciation of film betrays a willingness to embrace difference and the unknown. The act of filmmaking itself can incorporate democracy into its very essence: from the idea of personal expression to the idea of exploring the world and all its elements, and re-figuring, re-presenting this world. And, in turn, the discussion of cinema enables an interpretation, understanding, and appreciation of this activity, this curiosity of the world in which we live.

As always, this issue of Senses of Cinema covers a range of topics – Australian cinema, contemporary world cinema, film history, film pioneers, politics, animation, film theory, book reviews, film festivals and conferences, and CTEQ Annotations. There are also 14 new entries to the Great Directors critical database, including Borzage, Burton, Jia, Renoir and Vertov among others. We hope you find the reading stimulating, insightful and thought-provoking, and if you have any comments, please send them, and they will find a home on the ‘Letters to the Editors’ page.

It is with great pleasure that we welcome regular contributor, Jake Wilson, as Senses of Cinema‘s co-editor from Issue 26 onwards. And also we acknowledge and embrace the change of Senses of Cinema web designer, Chris Howard to Cerise Howard.

Special thanks for this issue go to Ray Privett, William D. Routt, and Jake Wilson for his editorial assistance.

Finally, this issue is dedicated to all victims of war.

For information and news regarding the current war, we suggest the URLs:

http://www.moveon.org/declaration/
Move On – Democracy in Action

http://www.unitedforpeace.org
United for Peace and Justice