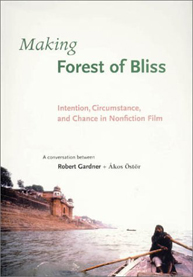 Several years ago I read a newspaper review which lionized Ken Burns’ The Civil War as “perhaps the greatest documentary ever made,” and nearly choked on my lunch. I had just seen Robert Gardner’s Forest of Bliss (1986) for the first time. It’s still hard to imagine a finer refutation of that forgotten writer’s ignorant enthusiasm.

But Gardner didn’t just make a better film than Burns; he made an entirely different kind of film. How does Gibbon’s history of the Roman Empire differ from a textbook on the same subject? The former is a great work of art, the latter the literary equivalent of library paste. Irrespective of Burns’ merits as a historian (which I am unqualified to evaluate), he does not make films but illustrations. Gardner, however, is an artist, and one of the finest sort.

In recent years it’s become easier and easier to forget that documentaries need not consist of sanctimonious and soporific narration, talking heads, and illustrated exposition. Today’s documentaries are overwhelmingly PBS-friendly, whether or not PBS would choose to show them: dogmatic, doctrinaire, and utterly artless.

The exceptions (Gardner, Pennebaker, Wiseman, Maysles, Morris, Hegedus, et al) only prove the rule. They all started making films three decades or more ago, when documentaries were considered more than rhetorical bludgeons and instructional tools for the uncurious and semi-literate.

Unfortunately, their films – including Gardner’s – are often exceptionally difficult to see, especially in theaters. Hence my pleasure to discover Harvard Film Archives’s Making Forest of Bliss: Intention, Circumstance and Chance in Nonfiction Film (2001), which pairs a conversation between Gardner and his collaborator Akos Ostor to a DVD of the film.

Gardner is, by any standard, an unusual filmmaker. Forest of Bliss is a 99-minute documentary devoid of English dialogue, subtitles or voice-over, with no narration or explanation. Nominally an ethnographic study of funerary practices in Benares, it straddles ethnography, cinema vérité and experimental filmmaking; think Godfrey Reggio without the gag-reflex. Exquisitely photographed without lapsing into sententiousness, precisely constructed but never stiff, Forest of Bliss captures the mystery and beauty of its subjects and their lives, without abstracting or sentimentalizing them. One imagines it as the sort of film that Levi-Strauss (or Bataille) might have made.

In Forest of Bliss, Gardner uses cremation rituals and funerary preparations as shorthand for the metaphysical ideas they reflect and realize. His understanding of those metaphysical ideas as fundamentally dialectical is reflected in the quotation from Yeats’s translation of the Upanishads with which he begins the film: “Everything in this world is eater or eaten, the seed is food and fire is eater.”

Forest of Bliss spans the course of a metaphorical day. It begins with a boy seeming to pull the sun into the sky with his kite, and ends with the sun setting on a cremation. Unidentified men wake and perform their given ritual tasks. One travels down myriad stairways to the river to bathe and pray. Another, wealthier and more powerful, receives the bereaved. A third ritually blesses a boat, possibly one in which corpses are carried into the river. They laugh, grunt, burp, sing, fart, eat and everything else people do in the course of things. And about them the city teems with life. Dogs, birds, monkeys and sacred cows wander amidst crowds of people, all going about their business.

Throughout the film, Gardner uses opposing pairs of simple, iconic elements to represent the cyclical, dialectical forces which animate the rituals he documents. The river has a living and a dead side; the purifying river reflects the sacred fire; bodies are rhymed with the wood measured for the cremation pyre and a smashed gourd of water with the cracked skull of a cremated corpse. These pairs, rhymes and oppositions are not explained, but simply presented as they appear in the rituals and the world.

“Why all this ambiguity and mystery about these things I’ve called simple elements?” asks Gardner in the book. “I’m not sure, except that I thought that the audience would not simply wait for the mysteries to be dispelled but would come up with their own solutions, supply their own answers, and so, in that way, they would be doing their own anthropology … I would be content if they merely registered the facts: fires, scales, boys, kites, thermals. I’m confident that they would then, at some level of their imagination, work out their meaning.”

And so they do. Unburdened by volumes of exposition per the nature of the specific events taking place, Forest of Bliss manages to capture their sense. Gardner has met with some criticism from other ethnographers. It should come as no surprise that his approach is deemed politically retrograde and unacceptable. Given the competition, however, it’s hard to take this criticism as any more than sour grapes. Ambitious mediocrities can be counted on to throw dirt on their betters. And Gardner’s attempt to understand and represent the meaning of the rituals he documents, even if mistaken, is far less objectionable than the ideological posturing and postmodernist claptrap of his detractors.

As for the product itself, the DVD looks remarkably good, especially given the challenges that digitizing Forest of Bliss must have presented. The luminous depth and clarity of the image in film prints of Forest of Bliss is necessarily compromised, and the film master apparently contained some artifacts (dust, small scratches). But these are mere quibbles. That the film is available at all (and for such a reasonable price – US$40 on Amazon!) is a wonder.

The book is basically a transcription of Gardner and Ostor’s running commentary on the film. The 153 chapters (or figures) on the DVD are parenthetically keyed to the text, so that one can follow along. This rethinking of a familiar DVD extra, while slightly awkward, was still probably a wise choice. Gardner and Ostor’s conversation is no breezy chat. They identify many of the people in the film, describe the significance of the various professions and ritual responsibilities of those people, and reflect on how the film uses visual parallels and metaphor to express an analysis of the theological concepts embodied in Hindu funerary rituals. The richness of ideas addressed in the commentary would surely have swamped an audio track; while the book profits when read in conjunction with the DVD, it easily stands alone as well.

Click here to order this book and DVD directly from