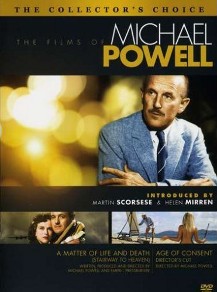 Thursday 27 March 1969 was an iconic day in the evolution of the modern Australian cinema.

In Melbourne, at the Forum Cinema, Tim Burstall’s Two Thousand Weeks had its world première. In Brisbane, at the Odeon Theatre, Norman Lindsay’s Age of Consent, directed by Michael Powell, had its.

These two films represented a cultural divide that would become a battleground in the 1970s between a home-grown film industry (represented by Two Thousand Weeks) and an imported one (Age of Consent).

Ever since World War II, British interests had held sway in distribution and exhibition, resulting in Australia being primarily used as a location for films made by foreign companies: Fred Zinnemann’s The Sundowners (1960), Stanley Kramer’s On the Beach (1959), Jack Lee’s Robbery Under Arms (1957), Leslie Norman’s The Shiralee (1957), et al.

These are classic films, but Australians were said to be looking forward to the day when local directors made films in Australia, with Australian actors and stories. One has to write “said to be” because very few Australians actually liked or even visited Two Thousand Weeks when given the chance. It was a critical and commercial disaster, and was quickly pulled from public screens. It has been largely been unseen ever since and there is no word yet of a DVD, a cultural crime on a major scale.

The sad fate of Two Thousand Weeks was argued by some to be definitive proof that purely Australian films had no audience. Fortunately, it was a view shattered one year later by John B. Murray, the Executive Producer of Two Thousand Weeks, whose The Naked Bunyip was a runaway hit.

Tim Burstall also quickly rebounded with Stork (1971) and the massively successful Alvin Purple (1973). One assumed the furphy that Aussies didn’t want to see Aussie movies would never be raised again. How little we knew, as the debate continues to this day, some three-and-a-half decades later. (1) 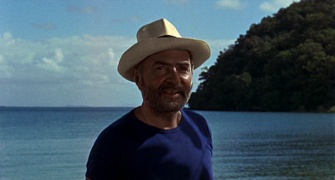 Age of Consent fared infinitely better than Two Thousand Weeks, drawing sizeable audiences (it ran continuously for 7 months at Sydney’s Rapallo) and generally favourable reviews. If there were niggling complaints, they were generally of the “Powell has done better than this” variety (hardly surprising given the gems to his name) and complaints that the film was a foreigner’s view of Australia. A brave few pointed out that many of the greatest films ever made were actually foreigners’ views; just think of the classics of 1930s and ’40s Hollywood made by European émigrés.

Sadly for Powell, Age of Consent did not travel well overseas and proved to be his last film. Columbia also seriously tampered with it. The score by Peter Sculthorpe, one of Australia’s greatest classical composers, was removed and replaced by a jaunty number by Stanley Myers. The film was also cut by 6 minutes, including the original credit sequence. (2)

Where Powell was fortunate was that he made Age of Consent in Australia before the cultural war turned sour. It is a film of the calm and unsure 1960s rather than the politically strident and exuberant ’70s and ’80s. Powell arrived at a time when it was still seen as an honour that such a famous filmmaker would come Down Under to make a film.

This was still the case when Brits Tony Richardson and Nicolas Roeg arrived to make Ned Kelly (1970) and Walkabout (1971), and Canadian Ted Kotcheff to do Wake in Fright (1971). (3) But the era of noted filmmakers from the north freely coming to work in Australia was about to end. A union cry arose across the land demanding that no foreign actors or directors be allowed to make films in Australia, especially films that had government money in them.

Powell’s film stands near the close of a fascinating chapter of Australian cinema. But for decades films like his (and Roeg’s and Kotcheff’s masterpieces) were belittled and marginalized, especially by politically correct Sydney academics. Even the sternest Puritanism fades, however, and these films have once again assumed their rightful prominence.

So, it is no coincidence that Age of Consent should now be released on DVD, even if by an overseas company (Columbia) and perhaps only to fill a gap in Powell’s stellar career. (The second disc in the box set, A Matter of Life and Death (Powell and Emeric Pressburger, 1946), has also been a significant absence from the DVD shelves.)

Lovingly restored to its original intent, Age of Consent is great cause for celebration – not only for fans of Powell but for anyone interested in Australian cinema.

Based on the 1938 novel by Norman Lindsay (4), Age of Consent is the story of an Australian abstract painter named Bradley Morahan (James Mason). Exhausted by producing near repetitions of past glories for wealthy New Yorkers, he decides to visit Australia’s Great Barrier Reef and recharge his batteries. There he meets the teenage Cora (Helen Mirren), who inspires him to change his painting style and be reborn as an artist. His previously closed emotional life blossoms as well.

The book and the film are in the great tradition of artist-model studies, from Alberto Moravia’s La noia (The Empty Canvas, 1961) and Guy Goffette’s Elle, par bonheur, et toujours nue (Forever Nude, 1998) to Willi Forst’s Maskerade (1934) and Jacques Rivette’s La Belle noiseuse (1991). But whereas they are all classic European stories, with European settings, Age of Consent is distinctly Australian. (5) 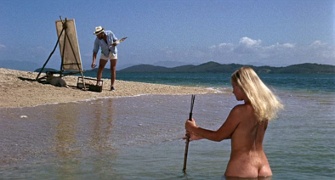 It is interesting that three foreign films made in Australia [at that time: Walkabout, Wake in Fright, Age of Consent] all use images of nature to set up studies in alienation. [… Michael Powell’s Age of Consent …] uses Australia as a tropical paradise in which painter and urban refugee Brad (James Mason) meets innocent and apple-munching nature girl Cora (Helen Mirren); male artist meets female life force and the inevitable happens. […]

There is a certain gendering of nature in some of these films: nature is in firm affinity with the feminine in Age of Consent […] (6)

The “tropical paradise” Morris refers to is Queensland’s Dunk Island. With serenely beautiful photography of exterior locations by Hannes Staudinger, Age of Consent captures a far more innocent and unspoilt Australia than exists today. It also helped reinforce the myth of Australians having a special connection with the landscape.

Not unexpectedly, James Mason gives a fine performance as Brad, despite being hindered by some narrative choppiness. (7) Though it is not one of his great performances – there is too little for him to really get his teeth into – Mason is so gifted and charismatic an actor that even some of the most minor moments shimmer brightly with his presence.

Helen Mirren, in contrast, overacts, which many forgive because it was said to be her first screen performance. (8) Part of the problem is that Mirren is too old at 22 to be playing a girl of unspecified age, but probably 15, and thus just under the age of sexual consent. There is always something unsettling about seeing a mature actor mimicking the sexuality of a teenager.

At least Mirren’s age deflated any possible concerns about teenage nudity. When Cora’s grandmother (Neva Carr-Glynn) complains that Brad is exploiting an ‘underage girl’ by having her pose naked, the audience is likely to think her an interfering twit, given the womanliness of Mirren’s physique. (9)

Mirren’s age also defused any possible censure about the romantic lead characters being separated by more than four decades in age – not that such matters seemed to bother Australians at the time. (10)

For comic relief, there is an irascible old mate of Brad’s, Nat Kelly, who is confidently played to the back rows of the Upper Dress Circle by Jack MacGowan. Though Nat is an irritating character who interrupts the love story, MacGowan tries bravely to capture the unique comic tone of Norman Lindsay’s writing. He is acting in the same film as Helen Mirren and Neva Carr-Glynn; Mason is in a different one altogether. But that disparity actually helps this story of a stranger in a strange land.

Mason was actually one of the film’s producers, with Powell, and their occasional disputes over the direction of the film are politely examined in the excellent DVD commentary by film critic and Editor-at-large for Film Comment, Kent Jones. 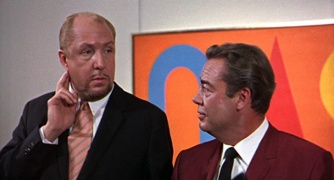 Actor Michael Pate (not seen in the film) owned the rights to Norman Lindsay’s novel and thus became the Associate Producer.

The cast includes such famous Australian names as Frank Thring and Tommy Hanlon Jnr. (a star of television and the circus (11)), and others who would become better known, such as Harold Hopkins (playing what Powell called “the local rapist”).

The commentary by Kent Jones is both casual and informed, rather like a fireside chat with a devoted fan. Jones provides some excellent background detail and clearly knows Powell’s œuvre well. He is particularly good on Powell’s use of colour and, whereas Helen Mirren is not a fan of Mason’s Australian accent, Jones is.

The weakest scene in the film is the post-credits opening in the gallery (cut by Columbia from the overseas version), but Jones makes a good job of justifying its choppiness and revealing the shooting problems of the day. Jones also does his best to argue for the unfortunate last scene in the water, but you never feel his heart is in it. 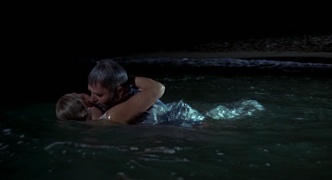 Clearly, the most controversial change to Powell’s original film was the junking of Peter Sculthorpe’s music. While one can understand that Columbia may have thought the music unconventional and uncommercial, it is arguably the film’s greatest asset. Though overly repetitious (that may not have been Sculthorpe’s fault), it is quite haunting and has a peculiarly Australian quality. One can understand Sculthorpe’s anger at its removal, still visible when he speaks of it today in the DVD extra about the making of the film.

The making-of documentary also benefits from the presence and memories of editor Tony Buckley, and Powell’s son, Kevin.

Other extras include a deeply respectful Martin Scorsese introducing the movie, and two other mini-docos: Helen Mirren: A Conversation with Cora and Down Under with Ron and Valerie Taylor.

Except for the most committed Powellians, Age of Consent is not a masterpiece. It is a flawed film that takes a long while, like many Australian films, to find its feet and rhythm. But it is often dazzling to behold and has moments of genuine charm and poignancy.

For too long it has existed only as a precious memory. Being able to re-embrace it is a thrilling and tender experience.