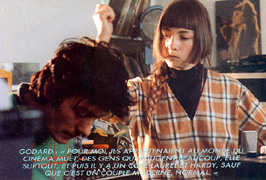 Before arriving in Iowa City for the Reading Godard conference, I had only a vague sense of how the University of Iowa figured within the cinematic map, informed mostly by way of reference to the names Dudley Andrew (I didn’t realize he had left for Yale) and Rick Altman (who, curiously, we never saw). This was the first major conference on Godard since For Ever Godard, the highly touted congress at the Tate Modern last summer. Since I had been unable to make it to London, I was grateful for this chance to discuss Godard on an international level. With the last minute cancellation of such noted scholars as Nicole Brenez, Annette Michelson and Peter Harcourt, the conference was given over to a “new wave” of younger scholars anxious to prove themselves amongst more established academics such as Joel Haycock, Michael Witt and Bart Testa. Even so, Reading Godard was a truly convivial and productive event, with perhaps less academic posturing than most conferences (but of course not completely absent of polemics). Divided into three panels dealing with the image, the written word and the body, the general scope of the papers was quite diverse: some gave emphasis to intertextual “reading” proper, some focused on the antecedents to Godard’s work, still others worked through theoretically informed interpretations of specific films. Most welcome however (and of course this is where my personal bias shows through) was a trend lending itself much more to phenomenological and/or bodily readings of Godardian intertexuality.

After the half-hour shuttle from the Eastern Iowa Airport in Cedar Rapids to my bed and breakfast on the northern edge of Iowa City, I was eager to explore my new surroundings. A three-hour walking tour left me confident I had checked out every used bookstore and java joint in town, so I headed down toward the Iowa River to the Becker Communication Studies Building, where a videothèque of some of the more recent Godard shorts was to be screened. In fact, conference organizer Christopher Babey and his “Godard team” culled a surprising line-up of screenings for attendees as well as the general public (yes, there are at least a few Godard fans in Iowa). Much to my delight, the two videothèques (one preceding and one following the conference) included the rare “Plus Oh!” (the 1996 music video done for France Gall), “Je vous salue Sarajevo” (1994) and “Pour Thomas Wainggai,” from the Amnesty International collaboration Contre l’oubli (1992). 35mm screenings of Lettre à Freddy Buache (1982) and Bande à part (1964) as well as an archival Beta SP tape of The Old Place (1999) were also presented, but perhaps the biggest coup was the screening of a newly struck print of 1987’s Soigne ta droite, which had been projected only twice previously. Seeing this film on 35mm for the first time did much to reverse my previous conception of it as one of Godard’s “lesser” works.

Before Friday night’s screening of Bande à part, department chair Alan Nagel reminded us that Godard was actually in Iowa City in the early ’70s, on tour with Tout va bien and Letter to Jane. Nagel recounted how Godard defied his Iowa audience to “read this,” remaining steadfast in his conviction that reading (at least in the context of his Dziga Vertov period) was an impossibility. Today, some 30 years later, his audiences are still wondering how to, or if it is even possible, to “read” his work. 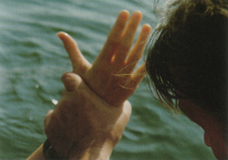 Saturday morning, Michael Witt (University of Surrey, Roehampton) began the first panel – Godard and the Image – with “The Pillage of the Archives,” an astute, carefully researched paper which explored some cinematic precursors to Godard’s Histoire(s) du cinema. Next came my own “The Hermeneutics of Immediacy: Intertextuality in Nouvelle Vague (1990),” which attempted to exchange the usual psychoanalytic, aesthetic, Marxist or auteurist readings of the film with a hermeneutic initiated through the primacy of perception. Patrick Kinsman’s (University of Indiana) “Fly the Godardian Skies” was a poetic rendering of some of the more salient points in Godard’s oeuvre, especially Deux ou trois choses (1966). Finally, Louis Schwartz’s (University of Iowa) “Photogramme: ‘If I Were a Writer'” gave us the by now obligatory Deleuzian paper on Godard, positing that his use of slow motion “lectosigns” reveals a gendered essentialism (i.e. women’s faces show a range of emotions, men’s do not). The following debate tended to pit those amenable to structural and even physiological forms of cognitivism (rallied by Schwartz) against those guided by descriptive and hermeneutic phenomenology – i.e. me. And while Witt’s paper was well received, Kinsman’s was unjustly ignored in the ensuing debate.

The second panel, Godard and the Written Word, saw Joel Haycock (University of Massachusetts Medical School) present “Modernism and Maoism Intersect at O: Political Iconography in Godard,” which traced through the intertextual lineage of some of the written text in La Chinoise (1967). Conference organizer Chris Babey then revealed “Godard’s Merleau-Pontyan Encounter,” positing Maurice Merleau-Ponty as a philosopher whose ideas can provide guiding insights into the whole of Godard’s multifaceted oeuvre. This idea has been long overdue – “Le testament de Balthazar,” Godard’s 1966 piece on Bresson “co-written” by Merleau-Ponty (he had been dead for five years) is seminal in this regard. Hopefully Babey’s project can jumpstart new trends in phenomenological Godardian studies. Next came Elizabeth Hope Finnegan’s (SUNY Buffalo): “‘[Lear] I Nothing am’: Locating the (no)thing in Godard’s King Lear” which provided interesting insights into how the “no thing” functions in this film. Mickey Greene’s (University of Iowa) “‘What’s in the Script Isn’t What’s on the Screen’: Mass Culture and Writing in Adorno and Godard” was also quite interesting and well received, giving us the chance to analyze the screening room sequence from Le mépris (1963) along cultural lines.

After a night’s rest, the conference continued with a panel on Godard and the Body. Susanne Vincenz’s (Freie Universitat, Berlin) “Effect of the Text – Literalness of the Body: Intertexual Transfer of the Filmic Character in Godard’s Le mépris” highlighted the difference between text as something read and something performed, and employed the gestured soliloquies of Piccoli, Lang and Palance to great effect. André Habib’s (Université de Montreal) “Godard’s Bodies: Cinema, Sports, Truth” revealed the heavy influence sports has on Godard’s cinema – especially tennis, which holds a special place in films such as Pierrot le fou (1965), Vladimir and Rosa (1971), Soigne ta droite, and Soft and Hard (1986). Habib’s montage of Godardian sports clips was extensive yet by no means exhaustive, driving home the need for increased study of this unique aspect in Godard’s work. Finally, Bart Testa (University of Toronto) gave us “Hail Mary and Feminist Intertexts: Body, Gnosis, and Christian Theology,” a paper impressive in scope and intent, of which, sadly, we were only able to hear but a small portion. My initial reservation, however, is that the author seemed unable to incorporate either Anne-Marie Miéville’s short The Book of Mary (which permanently prefaces Hail Mary) or the final shocking close-up of Marie’s gaping, red-rimmed mouth into his project (as for the latter, he concluded that Hail Mary should have ended well before this “error”). Obviously these omissions will have to be corrected, or at the very least acknowledged, in any final version.

Of course, conferences are just as much about socializing as presenting papers, and Reading Godard provided an equal balance of both. Both Friday’s opening reception at the Motley Cow Café and Saturday’s dinner at the house of Prof. Corey Creekmur provided a friendly atmosphere to meet with various professors and grad students attached to the University’s film program. What’s more, the relatively small number of conference attendees allowed for more intimate after-hours discussion at various local watering-holes, of which there are no shortage in Iowa City. Many intricacies of Godard’s cinema were hashed out over a pitcher or three of Linenkugel, the local beer of choice, which, as Susanne Vincenz pointed out, translates strangely enough as “linen ball”. It seemed funny to us at the time…

In conclusion, an observation. It seems strange that, at a conference dedicated to intertext, no one attempted any specific description of the term (myself included). An account of one particular incident, no more than an aside really, might go some way toward rectifying this. Following the final panel, discussion turned to tracing the tenuous links between Godard’s comic performance in Soigne ta droite and others such as Tati and Keaton. The discussion culminated in an illuminating reference to a specific footnote in Deleuze’s Cinema (I cannot remember which book) offered by one of the conference participants. What struck me was not so much the exactness of this person’s memory, but that this deferral to denotative “text” in the wake of a more figurative discussion is symptomatic of a dual trend in intertextual analysis. On the one hand, there is what I would call a “descriptive method,” in which loose links between films (in this case, the bodies of Tati, Keaton and Godard) are discussed in general, emphasizing the flux of meaning produced; on the other, there is what might be called the “explanatory method,” which relies on a systematic network of theoretical discourse to denote intertextual meaning. Both seek a deeper understanding of film itself, but approach their object via different avenues. To my mind they must work together; what’s more, description must constantly ground explanation if one wishes to avoid the extremes of either clichéd film reviewing or unfounded theoretical construction. Thus in lieu of any specific definition of intertext, what really came to the fore at Reading Godard was this difference in methods, the difference between a general way of seeing and a specific way of reading.