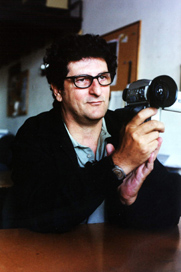 The popularity and exposure that contemporary Argentine cinema has enjoyed over the last 12 months culminated at the 4th Buenos Aires International Festival of Independent Cinema (18 – 28 April 2002) – a Festival which was almost cancelled due to economic problems – where a great number of local films screened for the first time. And for most of these films, which would not be released commercially, the Festival is their only chance of being shown before an Argentine and international audience.

Therefore, the retrospective on director Raúl Perrone and the screening of his latest film Late un corazón (A heart beats, 2002) in competition were highlights and necessary viewing for those interested in the independent movement, if such a thing exists. It must be said that Perrone’s films are very difficult to find, as they are not released commercially or available on video. Although Late un corazón didn’t win any prize in its category, it was awarded an Honourable Mention by the jury of Lo Nuevo de Lo Nuevo, the new Argentine cinema competition. Adopting a fragmentary narration, Late un corazón takes place in Ituzaingó, a neighbourhood in the suburbs of Buenos Aires, where the middle class has almost disappeared. The 50th marriage anniversary of Mr. Galván (Nicéforo Galvan) and his wife is the central plot point around which Perrone hangs his strangely formatted film. Shot on DV and handheld, Late un corazón registers as somewhere between documentary and fiction. Perrone’s regard makes us witness to the suburban and marginal lives of contemporary Argentina. By simply placing his camera before his subject, Perrone unobtrusively reveals the main characteristics of this neighbourhood: the lack of money, constant violence and theft, and codes of social exchange. And there is a feeling of nothing to do, that time will never lead to any kind of success.

Perrone’s film is linked to Pedro Costa’s No quarto da Vanda (In Vanda’s Room, 2000): even if there is apparently no drug problems in the ‘fictionalised’ Ituzaingó, both filmmakers enunciate their movie from inside the community, their point of view is not that of a spy but that from within the group, as if the camera were the subjective perspective of an unknown character. There is also the intention in both these films of showing what is almost never seen on the screen: the hidden side of big cities. There are no bright lights, cars or avenues; the filmmakers’ final attempt is our awareness of invisible realities. Costa says he makes “neighbourhood cinema” (1); we could say the same for Perrone.

As for conventional documentaries, this was the genre that really invaded the Festival this year. In addition to the sections Globalización y Barbarie (Globalisation and Barbarism) and Pasado y Presente (Past and Present), both of which showcased documentaries on these themes, there was a special section hosted by Adoc (Documentary Association of Argentina), which screened recently completed works and works in progress by its members. The importance of this special program lay in the images it presented of the violent events of the 19th and 20th December 2001, which ended ex-president’s Fernando De La Rúa’s government. These documentaries are not uplifting but they should be watched. Like Jung (War): in the land of the Mujaheddin (Alberto Vendemmiati and Fabrizio Lazzaretti, 2000), which is about the experience of an emergency hospital in Afghanistan prior to the USA’s attack, these documentaries aim to open the spectator’s eyes to what is happening in local communities instead of allowing the audience to be merely informed by the media, whose partiality and limitations when it comes to communicating the news we clearly know.

Also belonging to the documentary genre but with a different intention was La televisión y yo (Television and me, Andrés Di Tella, 2002), the author, however, prefers to call it “an essay”. Di Tella begins by trying to remember his own childhood and his relationship with television but ends by retracing the story of Argentina’s golden years of industrial progress: the Yankelevich family, pioneers in bringing TV to the country, and the Di Tella family, who ran and owned a huge factory which manufactured refrigerators, televisions, cars and other products. The director visits the factory as it exists today with his father and remembers nostalgically the old times of progress and glory.

On the same day that the premiere of La televisión y yo took place, Argentina’s finance minister resigned and the banks closed, and nobody knew when they would reopen. The film generated a very nostalgic feeling among the audience as it established a connection between our ‘glorious’ past and our desperate present. Even though the intention of the filmmaker, who was the former director of the Festival during the first two editions (1999 and 2000), was to take notes through images (as the film’s subtitle says Notes in a Notebook) La televisión y yo‘s narration becomes too personal, close to an autobiography of his family, and unsettling when he expects the audience to share his very personal and individual affection for his father and son. Perhaps more unsettling is the manner in which Di Tella’s family story is used to depict a whole country’s history since his upper class family background represents only a particular section of Argentine history and society, and an especially small one in current times. Di Tella’s film would have benefited greatly from a more humble, less elitist approach.

Balnearios (Marcelo Llinás, 2002) also begins with the same nostalgic mood. A voiceover tells us of the importance of watering places for middle class families in the ’50s and the manner in which during the vacation period, surrounding towns would become crowded and happy, full of children and games. The image shows super-8 colour home movies where old women and men bathe in the sea with old-fashioned swimsuits. This prologue precedes the four episodes in which the film is structured. The most interesting one is the second, which describes the Argentines’ behaviour at the beach. There’s an outline of the characters that could be found in these places, such as the corn seller or the lifeguard. Nightlife at these seaside resorts is shown to be a special occasion, where tourists wear their bermuda shorts and hang out downtown. The voiceover narrating the scenes resembles those used in anthropological studies of TV programs, such as National Geographic. Between laughter and nostalgia, Llinás doesn’t shoot beautifully shaped bodies or fashion models; he prefers big-bellied men and old fat women with wrinkled skin. The last episode presents Zucco, a great countryside artist, and member of each political, cultural and sport association of his town. As a balnearios fan, he sculptures fishes, mermaids and Neptunes in metal sheets and uses them to decorate the riversides. Although I found this episode hilarious, at times it was too local, which I concluded after asking the opinion of non-Argentines in the audience. Balnearios is a refreshing breeze and a totally different experience in Argentine cinema, and showcased a great talent in the new Argentine section.

This was also the case for two other films, Tan de Repente (So suddenly, Diego Lerman, 2002) and Todo Juntos (All together, Federico León, 2001). The former won the special jury prize and the audience prize (shared with the Brazilian Lavoura Arcaica [To the left of the father, Luiz Fernando Carvalho, 2001]). Its very powerful storyline is based on César Aira’s shortstory, La prueba: two punk lesbian girls meet “a very prudent virgin” saleswoman, Marcia (Tatiana Saphir), brought up in the countryside. Although one of the punk girls, Mao (Verónica Hassan), is obsessed with fucking her, the other, Lenin (Carla Crespo), helps her by forcing Marcia with a knife to go with them. They take a taxi, dispense with the driver and travel to Rosario, one of the biggest Argentine cities after Buenos Aires, where Lenin’s old aunt lives. The road movie then stops and settles down in the house where Mao finally realizes her desire.

Shot in black and white, the camera reveals hypnotizing scenes behind every door, every wall. Humour, aggression and innocence are the main ingredients in the relationship between the three women and their relation to other characters, such as the aunt, the aunt’s friends, and her two tenants (she runs a boarding house to make a living). The trip to Rosario is a no-turning-back experience in the sense that what the three women experience will live a trace in their souls.

On the contrary, in Todo Juntos there are no such changes. In this film, Federico León, a young theatre writer, actor and director, opts for a very structured two-character plot. A couple is about to separate but they are so used to each other that they can’t manage to get out of the situation. Little by little, it leads them to a tragic destiny. The impossibility of communication and nonsense dialogues bring us to an absurd ambience extremely linked to the theatrical language of the group of playwrights León belongs to, the so-called new dramatists. We witness a separation that never takes place, a parody of bored couples that seem to be already married. Although there are lots of phone calls and characters that speak with them, we only ever see the couple (played by León himself and Jimena Anganuzzi, an actress who appeared in his successful play, Cachetazo de Campo). The predominance of close-ups highlights the extremely subtle acting and reinforces the notion that we’re watching a very limited world. León’s aim to make cinema from theatre’s point of view is fully reached (2).

Quite contrary was La noche de las cámaras despiertas (The night of the awaken cameras, Hernán Andrade and Víctor Cruz, 2002), a very balanced documentary which intended to talk about cinema by using cinema’s language. By retracing the events of a night in the ’70s when a group of filmmakers decided to shoot a short film each to present an anticensorship act, La noche de las cámaras despiertas brings back the discussion between political cinema and the so-called art cinema. The film takes a refreshing view not only on Argentine film history but also Argentine political history, which is full of dark periods of military governments and censorship. Trapped as we are in the newest expressions of cinema, it can be very interesting and rich to pause and recall the past. The history of cinema as a legacy and a precious gift is what we can find in the end.

Although only a selection of films is discussed here, there were many other Argentine movies screened at the Festival. Let’s just hope one day there will be another chance to see them.