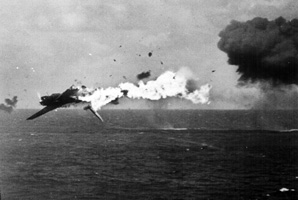 At Hot Docs this year, two titles about Japanese involvement in World War II made it as official selections. Nanking (2007), co-directed by Bill Guttentag and Dan Sturman, chronicles the Imperial Japanese Army’s destruction of Nanjing during the second Sino-Japanese war, while Wings of Defeat (2007), directed by Risa Morimoto, investigates the history of the tokkotai, or “special attack units” of the Imperial Japanese Navy – but known popularly as “kamikaze”. In the subject index of the festival’s program handbill, the two were cross-listed under “War & Conflict” and “Asian Cultures and Issues”, even though they could have fit easily in other categories: “Genocide”, “Personal Histories”, maybe “Terrorism”. Certainly not the first or last films to deal with the subject of Imperial Japan’s war crimes, both nevertheless converged on the program without thematic design.

The tragedy that occurred in Nanjing at the end of 1937 may be its backdrop, but Nanking’s version of things is considered through expatriate accounts: how a group of them had established a sanctuary in the city to shield civilians from the crossfire between Chinese and Japanese troops. The film’s theme of righteous heroism, one of the war genre’s most successful formulas, was in turn inspired by a key thread in Iris Chang’s The Rape of Nanking, the 1997 bestseller credited with popularising the “Nanjing Massacre” in the Anglosphere. Captioned as “The Forgotten Holocaust of World War II”, the late Chang had concluded her introduction to it with this call to action: “My greatest hope is that this book will inspire other authors and historians to investigate the stories of the Nanking survivors before the last of the voices from the past, dwindling in number every year, are extinguished forever.”

Although not strictly an adaptation, Nanking attempts to honour Chang’s appeal by furnishing, as she did, multiple witness accounts of events. When archival footage isn’t playing, several survivors are on hand to resurrect their memories. But an ensemble of actors steps in to personify the expatriates through a theatrical reading from their diaries and letters. Commenting on Nanking in her report from Sundance this year, Bérénice Reynaud criticised the use of actors to reenact the accounts, calling the effect “highly distracting” and likening it to “a publicity stunt”. That it’s distracting may be valid, since substantial airtime is given to living persons fundamentally removed from the story. Like its source of inspiration, Nanking too has been tailored for Anglosphere consumption; with its Western connection informing the use of mostly westerners as narrators of Nanjing’s heartache, the impression is that Nanking is a story for Westerners by Westerners. 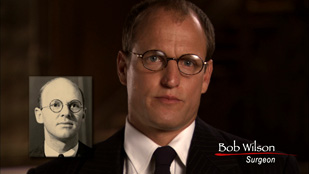 But since the filmmakers appear to have chosen talent whose celebrity posed minimal risk of undermining the subject’s gravity, it’s debatable if the use of actors is as blatant a publicity stunt as it seems. Surely, the more controversial stunt concerning this project is that a major Chinese state broadcaster with ties to its central government has served as co-producer, a move that has allowed China to covertly renew its steadfast indignation on the massacre while also milking Western audiences for as much sympathy as possible. Even so, what intrigues me is why similitude factored at all when choosing Nanking’s actors for their respective parts. Since the expatriate accounts were portrayed as a reading and not re-enacted, the need for resemblance between the actors and characters would have seemed trivial. How much more universally would these stories have resonated had those performing not been obliged with the convenience of merely looking the part?

A project of humbler aspirations, Wings of Defeat profiles the culture of the tokkotai through biographical testimony from four survivors. Morimoto’s interest in these former pilots is piqued when she learns of a family connection: as an adolescent, her late uncle had been recruited and trained as a pilot in the special attack unit, but later survived the odds of being assigned to a fatal mission. Curious why he would volunteer for such an activity, Morimoto approaches her family for answers, but when they fail to offer much into his past, her research brings her to several former pilots who had shared her uncle’s luck. There’s a crucial element of bicultural privilege that both Morimoto and the film’s writer, Linda Hoaglund have used to their advantage here. “Maybe as an American”, prefaces Morimoto as narrator, “I can ask questions Japanese can’t.” Given the culture of silence known to permeate the more notorious aspects of Japan’s military history, it’s a triumph that the filmmakers – and their subjects – were able to volunteer such candid accounts.

In Wings of Defeat’s most dramatically rendered segment, two survivors recount the mission that had ironically saved their lives. Narrated over an animated sequence, we see the pair, pilot and gunner, navigating their bomber in search of enemy transport ships to destroy when they are suddenly pursued by a swarm of corsairs – a virtual no contest. Miraculously surviving the dogfight but shot up badly, the two then decide to abandon the mission. Placed late in the film, it’s the sole depiction that indulges the tokkotai’s dauntless image that popular culture has conjured – except, given that both men had chosen to live, this imaginary accordingly exacts a sobering vein of reluctant sacrifice. To hear the pilot, a proud and intrepid chap – who up till now has given no indication that he has shed his vanity – be moved to commiserate the fate of his peers who were needlessly sent to die, is to hear words to the effect that he was fortunate to have survived the ordeal.

For as the film’s research and survivor accounts advance, not only was the tokkotai a failed military strategy, but Japan, aware that its resources were depleted and was staring at the Allies from a corner, refused to concede defeat, opting instead to go offensive while on the defensive – a position that had arguably precipitated her nuking and ultimate undoing. With her fleet of aircraft virtually redeployed for tokkotai missions during the war’s curtain call, Japan’s final act of desperation would easily be documented as a delinquent impulse, if not for the timely reminder that the manufacture and maintenance of these planes – already technologically inferior to the ones her opponents were using – had similarly involved the work of children.

This is why Hot Docs missed the opportunity to score a coup when it passed on programming Shonenko (2007), Kuo Liang-yin’s incisive look at Imperial Japan’s practice of recruiting child labour from Taiwan to build its fighter planes – the same that would be used by Japanese aviators as weapons during battle at sea. “Shonenko”, the Japanese noun for “child labour”, refers to the several thousand Taiwanese boys that the Japanese government brought to Japan in the waning years of World War II under the auspices of a work-and-study program. Like other territories in the region, Taiwan, then a Japanese colony, was a wealth of natural resources which augured well as an economic buffer against thwarters of Japan’s expansionist ambitions. According to the film, however, the promise of study – the sweetest part of the deal – was never honoured, and the children were put to work in Japan’s naval arsenals. Subject to military regimentation, they were to produce enough planes to counter the enemy fleets. 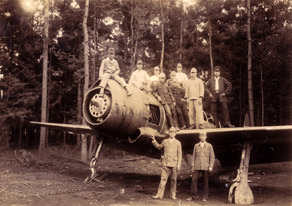 Considering the elegance with which Shonenko’s story dovetails with Wings of Defeat’s, its absence from the festival’s official selection was more regrettable. At the most basic level, both films survey successive moments in Imperial Japan’s military history during the 1940s, with Shonenko profiling one way Japan had armed itself for war, and Wings of Defeat corroborating the terrible end that awaited this doomed strategy. In addition, lurking in the shadows of these observations is the question of why Japan had resisted surrender even though it knew it never stood a chance against the Allies. On another level, the films examine the effects the end of the war had on their subjects. The former shonenko, initially abandoned in Japan after being denied welfare and a passage home, would later be confronted by postwar political unrest upon repatriation, both in Taiwan and on the mainland. And the former tokkotai, already troubled by the guilt of surviving their peers, would over time be oppressed by the shame of learning that Japan’s grievous war toll could have been avoided, if not greatly mitigated.

But beyond these denominators, there’s at least one other affinity both titles share that can’t be pinned down by clinical comparison. Even though neither film mentions the other’s province, each seems tacitly aware of them. In one serendipitous instance, a scene in Wings of Defeat explains how the tokkotai originated: Japan, facing a severe shortage of armaments and impending raids after losing all her aircraft carriers, decided that the most tactical way to delay the Allied fleet was to wager her planes in the battle. Almost intuitively, several of Shonenko’s characters point to the advance of Allied troops on the Pacific to explain Japan’s anxious commands to increase aircraft productivity, which were ineluctably brought to bear on the children. Such is the elegance of this dovetail.