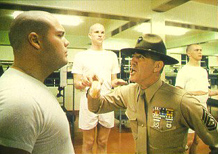 Although initially received with bewilderment, Full Metal Jacket (1987) now stands among the key works in Stanley Kubrick’s exploration of identity and its problematic nature. Fairly closely adapted from Gustav Hasford’s 1979 novel The Short-Timers, Kubrick’s film follows a young recruit dubbed Private Joker (played by Matthew Modine) – tellingly, we never learn his real name – as he moves from basic training on Parris Island to the hell of Vietnam. The screenplay was written by Kubrick in collaboration with Michael Herr, author of Dispatches (1), from which many details – including the key image of the words ‘Born to Kill’ “placed in all innocence next to the peace symbol” on Joker’s helmet – were directly taken.

In Full Metal Jacket, Kubrick continues his concern with the limits of free will already evident in such diverse figures as Humbert Humbert (James Mason) in Lolita (1961), the eponymous protagonist of Barry Lyndon (1975), the HAL 9000 computer in 2001: A Space Odyssey (1968), The Shining (1980)’s Jack Torrance (Jack Nicholson) and A Clockwork Orange (1971)’s Alex (Malcolm McDowell). In Full Metal Jacket, this theme is explored through the sadistic process according to which young recruits have their individual personalities broken down so that they can be rebuilt as fighting machines. Kubrick’s fascination with supposedly flawless systems running out of control (evident in all his films) emerges when Pyle (Vincent D’Onofrio) shoots his creator, thus becoming the perfect killer Sergeant Hartman (Lee Ermey) hoped to shape (this is even clearer in the novel, where the DI’s final words are “Private Pyle, I’m proud…”).

Many reviewers took Full Metal Jacket to task for the seemingly random quality of its final two-thirds. Yet, as Bill Krohn has argued (2), the malfunctioning system here is the narrative itself. The opening section on Parris Island is distinguished by the precision and clarity of Kubrick’s techniques, which reflect Sergeant Hartman’s single-mindedness: once this oppressive author/father-figure has been eliminated, the film ‘deteriorates’ into a series of randomly connected scenes showing Joker drifting with no apparent goal. For P. L. Titterington, journeys of “dubious meaning and purpose” (3) link Kubrick with Fuller and Godard, and Joker’s passage through Vietnam is accompanied by neither narrative urgency (even the climactic confrontation with a sniper occurs simply because the squad has taken a wrong turn) nor moral growth.

If Hartman’s ambition – to prepare fresh recruits for combat – is chillingly unambiguous, Joker’s purpose is vague to the point of madness. Even in Oliver Stone’s Platoon (1986), which attempted to depict the Vietnam War’s insanity, Charlie Sheen’s character had a clear goal: to survive. But Kubrick refuses even this motivation: if Stone’s hero could escape Vietnam and return to “the world”, for Kubrick there is only one world, a “world of shit” which cannot be transcended.

Kubrick’s loss of faith in narrative is thus linked with an increasingly pessimistic view of democratic institutions: whereas 2001‘s mysterious black monolith had some kind of ultimate (if ungraspable) purpose, Full Metal Jacket‘s structural collapse reinforces its critique of the ideological confusion which led to America’s invasion of Vietnam. All the talk about safeguarding ‘democracy’ is exposed as just that – talk. According to the director, “Vietnam was probably the first war that was run – certainly during the Kennedy era – as an advertising agency might run it. It was mingled with cost-effective estimates and phony statistics and kill ratios and self-deceiving predictions about how victory was the light at the end of the tunnel” (4). This theme had fascinated Kubrick since at least the time of Dr Strangelove (1963), in which the deaths of millions were referred to in terms of acceptable losses, ‘regrettable’ situations and ‘getting our hair mussed’. Similarly, Full Metal Jacket‘s protagonists discuss mass-destruction in language more appropriate to Madison Avenue or a baseball game (“How about getting with the program? Why don’t you jump on the team and come in for the big win?”). Normality and abnormality are imbricated to the point where no meaningful distinction can be made between them: Hartman holds up Lee Harvey Oswald and Texas sniper Charles Whitman as ideals to which true Americans should aspire, while Joker’s ‘natural’ humane impulses are what ultimately enable him to take the life of a human being (his insistence on granting the Vietnamese sniper a quick death is regarded with undisguised admiration by his fellow ‘grunts’, but for all the wrong reasons).

According to Kubrick’s daughter Anya, “War brings situations that expose the essence of someone’s personality. What the driving forces are” (5), and that irreconcilable division Kubrick finds within the human personality is at its clearest here: Joker’s peace symbol implies the precise opposite of the words – ‘Born to Kill’ – written on his helmet (one could ask for no better example of Kubrick’s ability to communicate ideas through individual images of great resonance), and Joker attempts to justify this by claiming “I was trying to suggest something about the duality of man, the Jungian thing”. The recruits may chant “I love working for Uncle Sam, lets me know just who I am”, but the problem of identity, of knowing ‘just who I am’, is addressed more problematically by Joker’s first words: “Is that you John Wayne? Is this me?” This oddly phrased line may be taken verbatim from Hasford’s novel (though there it is delivered by Cowboy, with Joker responding “I think I’m going to hate this movie”), but it clearly recalls Clare Quilty (Peter Sellers)’s introductory dialogue in Lolita: “I’m Spartacus. You come to free the slaves or something?” Kubrick often structured his films as games of doubles and doubling, depicting the world as a dualistic place in which one can be John Wayne/Spartacus and something else entirely. After the early ’70s, the violent working out of an Oedipal structure – in which the father is destroyed by the son – becomes increasingly important in his cinema: Alex lashes out at a series of father figures, Barry Lyndon (Ryan O’Neal) is crippled during a duel with his son, Jack Torrance is outwitted by his offspring, and Sergeant Hartman dies at the hands of a young man he had turned into a killer. But Joker’s relationship with Hartman, like Humbert’s with Quilty, is equally that of a mirror and its reflection. Joker is presented (or rather presents himself) as a humanitarian, but Kubrick gradually strips away all such notions: though initially reluctant to torment Pyle, Joker eventually beats him with more ferocity than anyone else.

If Kubrick’s films are about the workings of a mechanism, they lead inexorably to climaxes in which the intended end product – an individual converted into a tool in the service of some greater power – finally emerges: 2001‘s Star Child, A Clockwork Orange‘s ‘reformed’ Alex, his violence now to be used on behalf of an oppressive state, The Shining‘s Jack Torrance, revealed as having always been a pawn of the Overlook Hotel’s ‘ghosts’, and Full Metal Jacket‘s Private Joker, whose sensitivity will be precisely what enables him to complete his training and become a killer. Although they may superficially imply a tentative hope, Joker’s final words – “I am alive, and I am not afraid” – suggest the closing of a trap, the precise equivalent of A Clockwork Orange‘s “I was cured all right”.