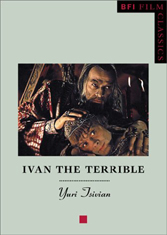 In the concluding paragraph of Citizen Kane (BFI Classics, 1992), Laura Mulvey argues that this film has, built into its structure, the need to think back and reflect on what has taken place in the main body as soon as the film finishes. The titles that comprise the BFI Film Classics series may seem arbitrary but if there is any logic connecting these various monographs, it is certainly the opportunity of taking a second look at films. For Mulvey, the second look also has an allegorical dimension, leading the spectator to a wider reflection on history and on the nature of political rhetoric. More importantly it opens up an awareness of how narrative works to conceal knowledge (of situations, of characters), converting this repression of knowledge into high spectacle, frequently reaching the levels of excess found in ritual.

Richard Taylor’s October and Yuri Tsivian’s Ivan the Terrible – the first volumes on Sergei Eisenstein in the series – invite the reader to explore the allegorical possibilities of cinema in new ways, providing also an invitation to new audiences who come completely fresh to these films without any of the weight of great debates on political rhetoric, history and the repression of knowledge.

In his volume on Ivan the Terrible, Tsivian suggests that his book can give not only a historical explanation of Eisenstein’s film but also act as a ‘stimulant’ for the viewer – and he has something useful to say about innocence in the face of the image:

We may admire the child who called the Emperor naked, but a candid eye is of no use to art: the more we know the better we can see. (8)

Tsivian tries to deal with what he identifies as the triple complexity of Ivan the Terrible – visual, musical and narrative – working through pre-production documents (notes, sketches, drawings) to draw out a quite magical account of Ivan the Terrible, as a whole.

What Tsivian gives us is a marvellous detective story, a woven narrative of threads and images that, like the intricate patterns of a hand-woven carpet, cannot be seen unless you look at them in a certain light and from a certain distance. Tsivian himself accompanies the reader through the story, reminding us all the time that he is there, puzzling away with us about the connections. “At one point I found myself in a quandary which I believe I managed to turn to an advantage”, he confesses at the start. “I was eight when I first saw Ivan the Terrible (a shattering experience, of which more later)” (8)

Elsewhere he deftly gets around the problem of not having read absolutely everything (in spite of nonetheless appearing to have done so):

I know there are works in gay studies and gender studies that address the problem of bisexuality at the level of detail that makes me feel like an elephant in a china shop; nevertheless I feel I need to tackle it… (64)

And, the cynic who is hostile to such elaborate reading of images is politely disarmed:

Before I go on, let me pause to look back – not to summarise but rather to apologize for what I have been doing… What I was trying to do was not to explain the meaning of Ivan but to explain Ivan as a picture. (73)

If I have taken the time to refer to the style of writing rather than to the substance of the argument it is in order to demonstrate that it is through this disarming style that we are drawn into the images of the film and the dynamic process of its production and reception in a way which is both engaging and fresh. Ivan the Terrible, Eisenstein’s last project, is a huge, cumbersome work, compromised by political censorship, baroque in its vision and demanding in its expectations of historical knowledge and symbolism. Tsivian’s book can be seen as a kind of restoration of the project, not simply a historical reconstruction but a work which succeeds in opening our eyes and sharpening our perceptions of the film. In the process he manages to lighten the weight of the film, to make its images dance between the screen and their sources in historical books, in art history, in Eisenstein’s sketches, diary notes and complex biography and the spectator’s own viewing of the film, which reassembles the images.

If we were to try to identify a methodological premise in Tsivian’s approach, we might select the concept of the ur-structure, to which he himself refers in describing Eisenstein’s interest in monistic theories, popular in late nineteenth/early twentieth century psychology and anthropology. Crudely put, this means that at the heart of things lies a kernel (a myth, a primal scene, trauma etc) which is the storehouse from which subsequent meaning arises. This concept is not exactly a causal explanation – subsequent events and meanings do not inevitably arise from this point, but in retrospect (and with the wisdom of hindsight), we can explain things by tracing a line back to the origin, even though there is never a possibility of predicting the outcome (which would be the case if this were a ‘first cause’ argument). Tsivian leads us in this analysis, not so much to a definitive understanding of, say, Eisenstein’s motivation, as if the final truth of the work lies in this theory (though he presents us with a pretty convincing argument that this be case), but rather to bring to light certain theoretical possibilities to inform a contemporary understanding of the film.

Richard Taylor’s volume on October, uses a parallel approach, referring frequently to what he identifies as Eisenstein’s use of synecdoche – or pars pro toto (the part for the whole). However, the key difference between the two films – and these two treatments of them – is that Ivan the Terrible could be considered to have historical sources in a way in which October cannot, since the latter film is itself one of the main sources of the event it ostensibly describes and hence it is, in a way, its own foundation myth.

Taylor is the editor of series dedicated to Eisenstein’s writings (1) and the most extensive resource on the director in English, so it is not surprising that there is a systematic order to his account of October, which moves through its narrative in linear fashion, stopping along the way to explain in greater length the meaning of individual images and sequences. His account is familiar to those who know October well, and he assembles all the elements of the narrative in the order in which they appear in the film, in a sense restoring the whole. Scenes from October have served repeatedly as a source for revolutionary images, its reconstructions, on more than one occasion, standing in for documentary footage of the events themselves. To this extent, Taylor provides a valuable overview of the film and a useful guide to its viewing. Because October is a film which rewrites history and establishes myth, unlike Ivan, whose historical figure was mythologized to begin with, Taylor spends a lot of time examining the connections and disconnections between historical ‘reality’ and Eisenstein’s filmic treatment of it.

One example of this attention to historical reality is his discussion of the monument to Alexander III, a key image of the overthrow of the ancien regime in the film. He traces its trajectory from its origins in Moscow, 1812, to the papier mâché replica used in the film. Taylor points out that this kind of montage of time and space owes more to Vertov than Eisenstein, a reading which would of course have horrified the latter. Later, Taylor makes clear his own view that the question of historical accuracy in October is a red herring. He insists that a clear distinction needs to be made between the historians attempt to explain events and the filmic treatment of the subject. Eisenstein’s attempt “to re-create the atmosphere and the truth of events”(77) necessarily changes (‘deforms’) the original events, as does the act of memory itself.

As Taylor shows, the story of October, the movie, begins as much in a public theatrical project in 1920 as in the events of 1917. To celebrate the third anniversary of the Revolution, Nikolai Evreinov directed a mass spectacle, The Storming of the Winter Palace, involving a cast of 8000 and an audience of 100,000 and involved a re-enactment of the events. As is so often the case with theatre and cinema, the spectacle (and later the film) improved upon the original event by reducing it to a series of stylised movements and stage directions. There was no attempt given to the precise reproduction of what had occurred in 1917, since, as the libretto for the spectacle puts it, “theatre was never meant to serve as the minute-taker of history.”(11) 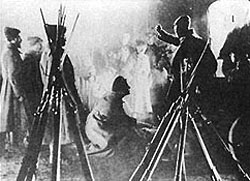 Both the spectacle and the film intensified the drama of the events – and caused more damage; as one elderly porter, charged with the task of sweeping up the broken glass from windows broken during the filming later told Pudovkin, “Your people were much more careful the first time they took the Palace.” (13)

October is more widely recognised for its formal experimentation and for its development of what Eisenstein regarded as the highest form of montage – intellectual montage. By this, he hoped to develop to the highest order the expressive possibilities of cinema. A good explanation of what he had in mind – and the hopes he had for cinema – was expressed in 1930 in a speech at the Sorbonne in Paris:

It is a matter of producing a series of images that is composed in such a way that it provokes an affective movement which in turn triggers a series of ideas. […Y]ou must not forget that cinema is the only concrete art that is at the same time dynamic and can release the operations of the thought process. The thought process cannot be stimulated in the same way by the other arts, which are static and can only provoke a thought response without really developing it. I think this task of intellectual stimulation can be accomplished through cinema. This will also be the historic artistic achievement of our time because we are suffering from a terrible dualism between thought (pure philosophical speculation) and feeling (emotion). (47)

The authors of these two volumes are well chosen, as both are leading figures in Eisenstein scholarship. In a volume co-edited by Taylor and which contains probably the best of the more recent scholarship on Eisenstein, Tsivian has also written on October, a companion piece to his reading of Ivan (2). Both these monographs are well illustrated and sourced, this being one of the main strengths of the BFI series as a whole, presenting informed and intelligently written essays. Tsivian’s is a more specialist volume than Taylor’s and is a more exhilarating read. But Taylor’s is one of the best narrative accounts of October yet published, giving us some details of its back-story not widely known to most audiences. Through them, we can discover afresh the very rich layering of both films – and perhaps Eisenstein’s visual experimentation will gain new currency as a powerful source of work for today’s new image-makers.

Click here to order Ivan the Terrible directly from