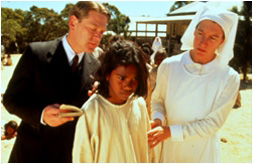 Unlike the central character in Newsfront (1978), a wonderful film about post-World War II Australia, Phillip Noyce – like many other directors of his generation (Gillian Armstrong being one example) – made the decision to leave his homeland for a career in Hollywood. The man who had made such iconic Australian films as Backroads (1977), Newsfront and Heatwave (1982), would eventually work with ‘stars’ like Harrison Ford, Denzel Washington, Sharon Stone and Val Kilmer to make a range of action-thriller genre flicks (Patriot Games [1992], Sliver [1993], The Saint [1997], The Bone Collector [1999] to name a few). His latest film, Rabbit-Proof Fence, marks Noyce’s return to Australian cinema.

Rabbit-Proof Fence is based on the true story of three Aboriginal girls, Molly (played by Everlyn Sampi), Daisy (Tianna Sansbury) and Gracie (Laura Monaghan), who in 1931 were separated from their mothers in Jigalong, Western Australia, sent to the Moore River settlement 2000 kilometres away to be trained as domestic servants, and then escaped, fleeing across harsh, desert landscape with the rabbit-proof fence as their only guide, to return home. The film is based on the book, Follow the Rabbit-Proof Fence, written by Molly’s daughter, Doris Pilkington Garimara, who was also forcibly removed from her mother. Documentary filmmaker Christine Olsen stumbled across the book in a newspaper story and from then on worked hard to turn it into a film, which included writing several scripts and bringing the project to the attention of LA-based Noyce. In press interviews, she admits that her first choice of director was Noyce primarily because of the uniquely realist and honest portrayal of Aboriginal characters in his debut Backroads. Noyce’s realist style in this film was related to his work as a documentary filmmaker in Sydney throughout the mid to late ’70s.

Similar to the book, Rabbit-Proof Fence serves the important if not cathartic purpose of empowerment through storytelling, that is, giving voice to experiences and perspectives that would otherwise remain buried under the sweep of history. Releasing these voices and acknowledging stories of colonial rule and oppression is just one aspect of the necessary work required for Australia to achieve some sort of reconciliation with the past and to build a society based on respect for its indigenous peoples. Rabbit-Proof Fence arrives at a time when sensitivity to, and awareness of, Australia’s colonial history and how Australia defines itself as a nation are greater then ever.

Running at a short 90 minutes, the film has a minimal storyline that moves swiftly through distinct dramatic arcs: separation of mother and child; introduction to a foreign world; escape and the tough journey home; and the final reunion. Although it tells a specifically Australian story – one belonging to the Stolen Generations and the White Australia Policy – Noyce tells it in such a way that emphasises universal elements of tragedy and heroism, in turn ensuring the film a broad, widespread appeal. To maximise this appeal, Rabbit-Proof Fence‘s release was accompanied by a considerable marketing campaign including the Ch 9 “Today” show crew filming the cross-Australia casting search for the three leads, Noyce personally premiering the film at various locations throughout Australia, numerous interviews, the production of a study guide, the republishing of the book and so on. But such a considerable marketing campaign only made me extra cynical. Believing that Australian audiences are reluctant to see a film about indigenous Australians and colonial history, it was as though Noyce was attempting to pique their interest by absorbing them in ‘side issues’: the ‘melodrama’ of casting the three young leads, recounting stories of what it was like to work with non-professional actors, highlighting the emotion on set during the filming of the scene where a white police officer forcibly removes the three children from their mothers’ arms. Even the turning of the young actresses into celebrities – appearing on magazine covers and so on – was tacky. When you consider that such a marketing campaign promoted a film very spare in plot (following a straight-forward trajectory of separation, journey home, and reunion) and told through universal themes (defeating all odds to achieve one’s goal), the effect of coaxing Australian audiences into paying for a ticket to see the film certainly didn’t bring them to one that was challenging, complex or especially novel.

Noyce treads the past carefully in this film, avoiding any ‘good vs. evil’ dramatisation of Australia’s colonial history and opting for a subtle evocation. For example, the character, A. O. Neville (played superbly by Kenneth Branagh), who ordered the removal of thousands of “half-castes”, is portrayed even-handedly, as a man who genuinely believed in the moral and civilising benefits of his mission and the unquestioned superiority of white over native culture. Presenting him in such a fashion rather then say in embellished evil terms evokes from the audience a sense of quiet, dismal hopelessness rather fiery opposition at an apparently vast chasm between two cultures. Noyce also doesn’t overlook the irony of the past, in particular the assimilation of Aboriginals into white culture, illustrated by the stalwart “tracker” (played by Walkabout star, David Gupilil), who enforces “white law” and captures any kids that escape the settlement. That he evinces a glimmer of admiration at the ability of the three girls to escape so successfully, however, redeems his essential, good nature. Overall, Rabbit-Proof Fence steers clear of any chastising over the past, avoiding painful images of oppression, violence and subjugation, and instead opting for resoluteness, optimism, survival and hope. The character, Molly, is essential in this regard: she is the leader of the three girls, the one who holds on to her ‘home’ culture the most, sees the Moore River settlement as “sick”, and decides to return home against all odds.

As well as a minimal storyline, Rabbit-Proof Fence has little dialogue and relies greatly on images, sounds, and rhythms to tell the story. It is worthwhile noting that the three leads had no prior experience in front of a camera, a fact which is likely to have constrained Noyce’s ability to make a more dialogue and conflict-driven piece. However, that most of the girls’ inner feelings are conveyed through facial expression is to the film’s advantage. And in addition Noyce’s assured direction, Christopher Doyle’s handsome photography and Peter Gabriel’s stirring score gives spiritual resonance to moments of emotional intensity, such as the tearing of children from their mothers, the seemingly eternal crossing of a daunting barren landscape and the homecoming embrace between mother and daughter. Yet I still await the Australian film that achieves a re-telling of Australia’s indigenous culture, history and experience in a form that matches its radical content.

A shorter version of this article appeared in Muse March 2002.