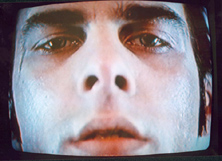 One of the great mysteries of aesthetics is where to draw the line between exploitation and art. This problem was addressed by many of those who reviewed Ghosts… of the Civil Dead at the time of its first release in 1989. Here was strong meat – tasteless and confronting! For those of us without direct experience of the prison system, it made us afraid both of the people who are ‘contained’ within prisons, and of what is being done to these people in our name. So, was it art? In 2002, re-released on video by Smart Street Films, Ghosts‘ aesthetic status seems more assured, less controversial, but it is no more comfortable to watch than on its first release.

For this film is social commentary at its most uncompromising. It is not a documentary, though it uses documentary techniques to draw us into the prison experience: identification photographs, complete with name and prison number superimposed, introduce us to the prisoners; intertitle dates mark the passage of time; long intertitle quotes from the ‘Report’ which exonerates the system after the riot provide counterpoint to the events. There is little character development, though some individuals become clearer to us as time passes, as they do in many documentaries. The ensemble cast (some professional actors, some ex-cons themselves) is disturbingly convincing, adding to the documentary feel of the film. The camera lurks on the edges of events, or sees them only indirectly (through doorways or peepholes or on videotape), as if capturing something fleeting rather than recording what had been set up for that purpose. There is only a vestigial narrative – after setting the scene, the story flashes back to the beginning of a series of events that culminate in the riots which we do not see.

Like much documentary, the main purpose of Ghosts is polemical: it argues not only that violence is endemic in the prison system, but that this is deliberately instigated by (unidentified) prison authorities, in order to justify the building of new, even more repressive, prisons (announced in another intertitle at the end of the film), and the granting of ever greater power to prison administrators. So the warders make no effort to stop the violence of prisoners against other prisoners: in fact, Wenzil (played by Dave Field), who murdered Lilly (played by Dave Mason), and was seen to do so on the warder’s surveillance videotape, is one of those released after the riot. But the warders, for all their harassment and intimidation of prisoners, and the apparent pleasure they take in acts of unmotivated and pointless aggression, are also victims here, prisoners of the system too. They know that the riot is inevitable, but they cannot escape it. One leaves the service and then suicides, another is dismissed and his evidence to the enquiry discredited. None of this helps the warder whose death finally triggers the riot: he is stabbed repeatedly by an inmate, while the other locked-down prisoners shout and scream encouragement. So, guards and prisoners alike are imprisoned (though not equally), and both are expendable. This is a Foucauldian argument that the prison system is an agent of the state, to legitimate the use of force against citizens (Simon During is identified in the credits as ‘ Foucault authority’).

But it is another literary cum philosophical guru who even more directly than Foucault inspired the film’s content – Jack Henry Abbott, who, after a lifetime of incarceration, finally hanged himself in his cell in the early weeks of 2002. In fact, the film draws its title from Abbott, who writes despairingly: “As long as I am nothing but a ghost of the civil dead, I can do nothing…”. To Abbott, the ‘civil dead’ are those, like himself, who have had their autonomy systematically destroyed by the state. He was first sent to a juvenile detention facility at the age of 9, and was in almost continuous confinement of one sort of another from the age of 12. In fact, in the ensuing 46 years he experienced only three short periods of freedom – the first when he was released from the American ‘reform’ system at the age of 18 until he committed his first adult crime, the second for six weeks when he escaped, and finally for the few weeks between his release from his first ‘indeterminate’ sentence until the murder for which he was incarcerated for the rest of his life. Over those long years, his existence was one of unremitting violence – by him, around him and against him. Yet his writing about that life (published in 1981 by Random House, New York, as In the Belly of the Beast, with an introduction by Norman Mailer) was generally hailed as a work of art.

This is less of a paradox than it might at first sight seem. Abbott read voraciously, mastering most of the classics of western philosophy, and developing a very personal vision of how the world operated and what his own place was within it. He had no illusions about himself – he knew that he had been brutalised, but this did not stop him yearning for the sort of freedom that those ‘outside’ took for granted. His book indicates that he would be the last person to be surprised that he killed while ‘on the outside’, nor that he killed himself in prison: in the film, Vincent Gil’s Ruben (with his cell lined with books and notes, and his warning to the prison guards that what they do to prisoners now will affect how prisoners respond to the world outside after their release) comes closest to a Jack Henry Abbott character, though each of the film’s characters encapsulates in some way Abbott’s experiences. Abbott understood that there was a huge (and – by the time he was writing, in his late thirties – probably unbridgeable) gulf between the person he would like to be, and the person that he recognised within himself. For this he blamed the penal system, and the government which provided it with authority: he recognised that there had been vast changes in the system, but also that this was too late for ‘state-raised convicts’ like himself.

Back in 1981, when the book was first published, penal reform was one of the hot topics on the liberal political agenda, but Abbott makes clear (as does also Ghosts… of the Civil Dead) that penal reform is not going to rehabilitate state-raised convicts, nor reduce the violence of the prison culture. In Abbott’s experience, a gaol sentence is not just withdrawal of liberty, but continuing and escalating aggression, torture and sadism – and both remorseless and inescapable. The new prisons may find more subtle ways of doing this than the beatings, sensory deprivation and inappropriate medication that were standard practice in the early years, but the dehumanising effect – Abbott and the filmmakers argue – is much the same. In the process, violence becomes an art form, which Abbott compares to bull-fighting.

Ghosts takes up this story with the ‘new generation’ prisons – its story takes place in a modern, high-tech facility with pastel-coloured decor. But the purpose and function remains the same: cosmetic improvements cannot reverse the de-humanising effect of the prison culture. The film also proposes parallels between these prisons and the world outside. So, the clean, spare architecture is utterly impersonal: towards the end, we simply assume that a shot of Wenzil walking across a doorway is inside the prison until the camera pans out to reveal that he has been released and is in an underground railway station. An impersonal female voice-over makes all the prison announcements, just like those announcing the arrival and departure of trains in the same scene. The light colours and bare walls suggest a gentle and pleasant environment: however, because the film has demonstrated the violence just below the surface, and we have seen it break out horrifyingly in the prison, we wait with trepidation as Wenzil ascends the railway escalator behind an unsuspecting woman…

Sound is a significant aspect of the argument. Nick Cave’s music is used to heighten tension; non-diegetic voices and sounds echo eerily so that what seems an innocuous image becomes threatening because we are not sure what those sounds mean or where they come from: dead silence over the washed-out blue of the surveillance video adds to the sense of alienation that it evokes.

So, Ghosts of the Civil Dead is fiction, not in any sense a reconstruction of recognisable events, and certainly not of Jack Henry Abbott’s life. But in creating its fictional world – a world set in the present of the filmmaking – it builds upon Abbott’s letters to Norman Mailer, and provides the viewer with a shocking and compelling insight into an alien and disturbing culture. The liberal conscience would like to think that the film speaks of a past that has now been left behind, but, in a world where private prisons are operated for profit, we cannot afford to become complacent. Perhaps Ghosts of the Civil Dead has been re-released at just the right time, after all…

To obtain more information about Ghosts… of the Civil Dead or to purchase it on video, visit Smart St Films.