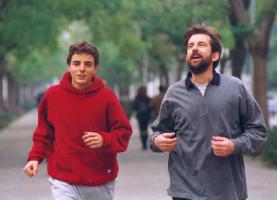 All my adult life, I have adored spending hours quietly in the dark, indulging and enriching my emotions, feeling life expand, nourishing the heart and nurturing the mind at the same time, accumulating experiences which might be cherished a whole life long. The 54th Cannes Film Festival constituted both a sobering and an intoxicating corrective to all that self-indulgence. If you enjoyed the privileged seat of an accredited correspondent, you could watch films all day, then all night, on and on for a week and a half. If you did not have a pass around your neck, then the most rigid and rigorous system of apartheid applied: you became, for the purposes of the Festival, a non-person.

Cannes’ largest cinema (a movie hangar or warehouse, if you like) regularly posted “full house” signs even before the Paris papers were delivered. Those morning screenings were especially weird, surreal, almost cinematic in themselves. Going to the pictures at 8.30am is much like having a drink as soon as you wake up, and not just a cleansing ale down at the beach. At that absurd hour one day, I tried but passed on The Officers’ Ward (La Chambre des Officiers, François Dupeyron), an unduly earnest account of an interminably prolonged recuperation by a Great War shell casualty. Instead, I wandered over the road to see a film which fully met the only true criterion of fine art. I have borrowed that standard of judgment from an Irish novelist, Colum McCann, but am sure that he would not mind my saying that the job of a great filmmaker is to find a story which breaks her or his heart, then to find a way of re-telling that story to break the hearts of those who watch it.

The newspapers subsequently reckoned that Nanni Moretti’s La Stanza del Figlio (The Son’s Room) received a standing ovation, but that clapping started only after most of the audience had finished crying. Afterwards, I became extremely boring in advocating Cannes’ highest award, the Palme d’Or, for this cruelly wrenching story of a contemporary Italian family. Anyone familiar with my taste in films will acknowledge that it is the merest co-incidence that the Cannes jury, the majority of critics, and everyone else crying their eyes out in that cinema, agreed with me. True connoisseurs had started wiping their eyes well before the end, at the point where Moretti’s family is shut up together in the car, him singing along in a raucously tone-deaf way to an Italian pop song (having ignored his son’s barb that the proof of his hearing defect was that he listened only to Italian music), then – one by one – all the rest of the family joining in, with the singing off-key but the family harmony and happiness perfectly pitched. Even real hams can recognise true gold.

Back to the early-morning-start schedule, and on my first day, I was permitted to draw breath briefly at noon just before “a dog starts a series of incidents that result in political confusion” (A Dog’s Day, Murali Nair). That quote comes from the circulated daily program, one which promised to show, well before a first coffee, “desolate present-day teenagers living on the fringe, who go on the road to fulfil a criminal deal with dire results” (Marfa Si Banii). After that came “a man’s tortuous lifestyle which goes to show that there is no single formula for the alchemy of love” (La Confusion des Genres, Ilan Duran Cohen, 2000), “a Taipei watchseller who becomes obsessed with setting all the city clocks to French time after his lover moves to Paris” (What Time Is It There?, Tsai Ming-Liang), “a man who was known little but success all his life until he meets an architecture student” (Lan Yu, Stanley Kwan), an English epidemic of mad dog disease (Mad Dog, Ahmed A Jamal, 2001), “three married women who leave home and squat at the house of a man they have just met” (And They Call This Spring, Herve Le Roux, 2001), and much more besides.

I turned up late to Cannes, having been intimidated by the prospect of finding something new to say about the opening film, Moulin Rouge (Baz Luhrmann, 2001), specifically about a singing, dancing, maritally separated Nicole Kidman. It seemed much easier to find something new to say about The Son’s Room than this opening film. My encounter with that particular story was limited to a waterside exhibition of old movie posters. One, which advertised John Huston’s earlier version of Moulin Rouge (1952), was adorned by a high-kicking Zsa Zsa Gabor showing off her rude good health. I did, however, run into a fellow Australian (you always do, anywhere at all), who reckoned that he had arrived in Cannes via Too-loo-so (presumably a town near Toulouse in southern France), and therefore had the argot down pat for both Moo-lan and Toulouse Lautrec.

On the subject of hams, I was quite wrong to suspect that the glitz and glamour of Cannes might be concealing a bit of sleight of hand. Audiences, as well as critics, saw through a number of the entries. The absence of bankable Hollywood stars, the paucity of tourist dollars, the lack of zip and élan on the Croisette (apart from the bout of crying) – all those consequential problems were blamed, fairly or not, on the quality of the films selected for the festival.

The asperity of self-criticism was striking. One critic offered suggestions not just for the Palme d’Or but also for a “palme dort”, a prize for putting viewers to sleep. That might be transcribed into English, I suppose, as the “palm bore”. The published daily critics’ checklist included the usual star system (one to three of those) then added a “coup de pied” (a kick in the pants) in the form of a lightning bolt. Zeus used his lightning bolts more economically. The critics dispensed theirs often enough to keep directors poised awkwardly on their toes.

Mind you, that is not necessarily a bad position for directors to adopt; otherwise at Cannes they were fawned on as photogenic, invariably quotable, profoundly insightful demi-gods. Desert Moon (Aoyama Shinji) attracted two lightning bolts, and only two sets of two stars. Il Mestiere del Armi (Ermanno Olmi) won the backhanded lightning bolt competition with three of those, supplemented by four lots of one star alone. Roberto Succo (Cedric Kahn) was received better by the critics than by local police, who staged demonstrations to show how affronted they were by its story of a criminal psychotic escapee from an asylum.

Even true believers seemed aware that the Cannes entries would be swamped by films which far more people – right or wrong – really wanted to see, whether Return of the Mummy the week before or Pearl Harbour the week after. In the same vein, the plots of the movies were upstaged by the shameless lack of any plot at all in France’s true-life, warts-and-all, sex-and-all television show, “Loft Story”. Inexplicably, audiences evidently preferred to watch quite ordinary people having ordinary sex on the TV rather than extravagantly fake actors theatrically faking it at the movies. The real joy in film going was to be found just down the road, or – in fact – down any road and around any corner in France. That is Fabuleux Destin d’Amelie Poulain, which 600,000 French moviegoers are turning up to week after week.

Leaving aside Nanni Moretti, the Cannes film market offered more heartening evidence than the selected films of likely, future pleasures in the dark. The market, tucked around the back of the main cinema (and therefore enjoying a much better perspective on the harbour and its grandiloquently extravagant yachts), was a distribution centre for a much wider range of films than those competing in the Festival. Cate Blanchett was advertised in the starring role in the English rendition of a French Resistance tale, Charlotte Gray. Harvey Keitel not only returns (and neither in a dress nor a sailor suit this time) but brings with him Giancarlo Giannini in Mother Viper. The unsung, wonderful Stephen Rea takes on an adaptation of Simone de Beauvoir, All Men Are Mortal. Some of the other films competing for distribution may not be as disconcertingly unlikely as they seemed on first sight. Boomerang, for instance, is a Yugoslav-Canadian co-production, the short-form advertising for which declared deadpan that “Yugoslavia’s tragedy is today’s comedy”.

As always, there are grand treats in store. Even if everyone has firm, equal judgments about films, some of us might still claim to be “amateurs”, in the French usage of that term, to describe someone who knows and loves what she is seeing or doing.

Outside the cinemas and the film market, all the wider world of buying and selling went on about its business. The Player always plays at Cannes. The United States pavilion maintained that studiously self-parodical air which so rarely deserts Americans, selling not just cups of coffee but “organic Peruvian decaf”. Reviewers weary of the movies could try to work out how many labourers were needed to shift Cannes’ famous red carpet into position (half a dozen did the job), how many stepladders could be crammed into the gawking space opposite that carpet (more than you could poke a paparazzo at), or how many permutations of the little back dress – worn with strappy sandals and a gold handbag – could be found within a city block (my arithmetic was not up to that job).

At Cannes, art might imitate – or even upstage – life once in a while. Only the French, though, would dare to stage a film festival on the Riviera, on a life-size film set which embodies and celebrates every cliché which the movies have made their own. At the end of it all, justice was done. The Son’s Room was awarded the Palme d’Or, after an awards ceremony so blissfully short it put the Oscars to shame. Charlotte Rampling (who admits to 56) looked stunning; Isabelle Huppert remembered to thank classical composers as well as her family for her best actress award (for The Pianist, Michael Haneke), and the glitterati adjourned for a good, early dinner.

Godard reckoned that films presented reality at 24 frames per second. Can you, though, digest reality through 24 films a day? If you wanted a quieter, deeper film experience, then my advice remains the same as it was earlier in this article: go and see The Son’s Room.