The Love Letters from Teralba Road first caught the attention of audiences at Sydney University’s Union theatre and later, on a double bill with Jillian Armstrong’s The Singer and the Dancer (1977) in seasons at Sydney’s Dendy cinema and at the Longford in Melbourne. It remains one of the more important intermediate films from emerging Australian directors along with Phillip Noyce’s Backroads (1977), John Ruane’s Feathers (1987), Geoffrey Wright’s Lover Boy (1988), and Ana Kokkinos’s Only the Brave (1994). It was funded through the Australian Film Commission’s (then) Creative Development Branch for $25,000 and it is interesting to note that only recently, the AFC has once again recognised the merit in developing and funding short features. (1) Most notably in popular terms, it introduced Brian Brown to Australian filmmakers and audiences. Within less than a decade, Brown would play major roles in no less than seventeen feature films galvanising his position as the archetypal laconic Australian male. And despite continuing jokes about Brown’s allegedly limited acting range along the lines of him “going home and practising his expression” (2), his portrayal of Len is a disturbingly convincing and multifaceted mixture of repressed and manifest violence, naivety, optimism, frustration and romanticism. 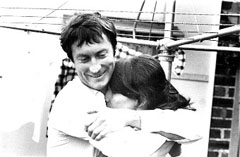 “He wrote foolish letters in a language that wasn’t his own, and he used Hollywood concepts of love and relationships. . But behind them were very powerful emotions; descriptions of a life that was difficult and tragic.” (3)

In 1972, Stephen Wallace found some letters in a desk drawer in a rented flat in Sydney. They were to form the basis of a screenplay originally written to be part of a series while Wallace was writing documentaries at Film Australia. Dick Mason, the commissioning producer intended the film to be shot in Fairfield in Sydney’s western suburbs. When the series was shelved, Wallace took the script to independent producer Richard Brennan. Originally co-written with Moya Wood (who is credited as script editor), its narrative thrust comes from the inept efforts of a violently jealous husband who seeks a second (or perhaps third or more) chance with his estranged wife Barbara (Kris McQuade). Like Len but for different reasons, Barbara is barely equipped to conduct a responsible relationship. And so we become witness not only to an ambivalent struggle towards reconciliation, but to a world which is replete with enough social and family impediments to make it harder than it should be.

There are some extraordinarily observed moments when joy and banality intersect, including when Barbara and her young sister Maureen (Gia Carides) simply fool around with a garden hose. Other scenes which appear superficially at least to serve no narrative purpose – such as Len’s gaze being averted by two girls on a train, are what makes much of the style of this film so distinctive. Curiously, it is one which Wallace has never repeated.

Kris McQuade as Barbara is especially memorable, including a scene where she delivers an imaginary speech to Len – in reality, to herself in the dressing table mirror. The performances in general owe their authenticity in part perhaps to Tom Cowan who had already gained a reputation as an actor’s cinematographer, favouring hand held techniques and a non intrusive shooting style over the complicated lighting necessary to achieve the glossy look of higher budget nostalgia films for which the “new” Australian industry was becoming known. In arguing for a “Poor Cinema”, James Ricketson held Love Letters up as an example of the kind of production on which filmmakers could “work to low budgets with small crews, small casts, low shooting ratios and short shooting schedules, concentrating on content rather than technical excellence.” (4) Love Letters might therefore be seen as part of an alternative strain in Australian cinema which has been significantly defined by its industrial philosophy.

Despite its working class characters, suburban beer barns, dingy milk bars, railway cafeterias and concrete back yards, this is not the work of a filmmaker on a sociological mission, nor is it especially seen by Wallace as an auteur piece. “It wasn’t a deeply personal film because it was [originally] written … for a director unknown to me … mostly it was an attempt to make believable the characters that had grown out of the letters.” (5) In spite of, or perhaps even because of this apparent detachment, The Love Letters from Teralba Road remains one of the very the best examples of Australian social realism, free from ideological posturing or moral judgement.