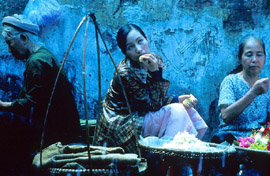 The Vertical Ray of the Sun (2000) is the third feature film from Vietnamese filmmaker Tran Anh Hung (after The Scent of the Green Papaya [1993] and Cyclo [1995]) and the first film of the 2001 ‘Silk Screen’ Collection. The film centres on three sisters who live in present-day Hanoi: Lien (Tran Nu Yen-Khe, Hung’s wife and star of his previous films), the youngest; Khan (Le Khanh), the middle sister; and Suong (Nguyen Nhu Quynh), the eldest. The film takes place over the course of one month, starting on the anniversary of their mother’s death and ending on the anniversary of their father’s. The lyrical echo of this time frame symbolises the rhythmic nature of Hung’s latest film. He explores both the bond that exists between the three sisters and the relationships with others that feature in their daily lives. Suong’s botanical photographer husband Quoc (Chu Hung), with whom she has a small boy nicknamed Little Mouse, is prone to long absences from home. Khan has recently discovered that she is pregnant to her husband Kien (Tran Manh Cuong) who is a writer suffering from writer’s block. The flirtatious Lien constantly fantasises about being pregnant and lives with her brother Hai (Ngo Quang Hai) for whom she has a deep affection. Significantly, Hung’s exposition of these individuals’ daily life and their relationships does not find expression in high melodramatic terms. In addition, the protagonists and their situations are balanced by the relaxed mise en scène.

The opening scene of The Vertical Ray of the Sun has a static camera set up as a male and female (Lien and Hai) awake to birds chirping and the sensual sounds of the Velvet Underground. It is obvious by the time they take to properly awake that they are in no particular hurry. As the male performs some stretching exercises, the female slowly allows her body to adjust to the protruding daylight coming into the apartment. This laconic scene occurs three times in The Vertical Ray of the Sun and sets the mood and tone for the entire film. Hung’s film text bears a non-narrative core that dictates the relaxed pace of the film and immerses the spectator in the world it captures. Consequently, the spectator intervenes within the film’s layers and finds a space of their own, minimising the gap between spectator and image despite the striking photographic visuals. The most obvious moments of spectatorship via the spectator-object dichotomy occur when the camera ‘looks at’ the beautiful Lien as she awakes or sensuously dances in the middle of her apartment.

Hung couples the simplicity of daily life with the complex emotions that mark these characters and bind them to each other. The natural environment of Vietnam is integral to this process. Present day Hanoi is revealed as humid, tropical, lush and green. Contrasting with the mostly interior shot Scent of the Green Papaya, the characters spend most of the time outdoors. Even when inside, the natural environment is never closed off, and the downpour of tropical rain or the singing of birds and insects can be heard. The film’s calm and minimal exposition has a hypnotic effect. Despite the sometimes dark subject matter and concerns of the characters, the mood never becomes ardently tense. Especially telling in this respect is the character, Quoc, whose guilt threatens to take over his entire body. In a strikingly beautiful scene, he tells a stranger fisherman about his overbearing guilt at dividing his loyalties between two families. Shot in the middle of an idyllic locale called Halong Bay (where Quoc’s second family reside) his sad and sorrowful eyes reveal more than any staged dramatic outburst. Notably, the element of water is employed throughout Vertical Ray, whether it is a heavy downpour that partially floods the streets, Khan gently washing her husbands hands, Quoc swimming through the clear water or the sisters washing their long and luxurious hair. It washes, cleanses and nourishes both the characters and the environment, allowing for the constant possibility of renewal.

Love, family, loyalty and trust are important themes that run through Vertical Ray. Thematically, it bears some resemblance to Ang Lee’s Eat. Drink. Man. Woman. (1994) in that the both films are constructed around the tenderness and passion that binds female siblings. There is a lyrical repetition and mirroring of instances that occurs in Hung’s film. At the beginning when the sisters and family gather at Suong’s Café to celebrate the anniversary of the mother’s death, the subject of a mysterious man nicknamed Mother’s Toan arises. His presence in their mother’s life is shrouded in uncertainty and they can only speculate as to his exact role. This is matched by their aversion to finding out the truth in case it taints the idealised image of their parent’s marriage or helps to reveal their own secrets. Nevertheless, the mother’s mysterious relationship affects all of the sisters in their own relationships. It seems the past cannot be denied but weaves itself into contemporary lives, albeit in different forms. Suong, Khan and Lien form a close unit, yet each has a secret that she does not share. Separately, each epitomise the different stages in a woman’s life and the various stages of a romantic relationship.

Hung is an important and adventurous filmmaker whose films transcend boundaries. His latest feature film may be accused of lacking narrative drive or likened to a film such as Wong Kar-wai’s In The Mood For Love (2000), which is intensely atmospheric and visually compelling. Notably, cinematographer Mark Lee Ping-Bin who shot The Vertical Ray of the Sun also worked on Wong’s In The Mood For Love. Yet, it must be acknowledged that this visual scheme is part of a greater aim to allow the spectator different points of entry into the text. Moreover, the combination of spirited dialogue with artistic visual images reveals a sensitivity to the material. It is this approach that creates a sensory experience for the spectator. As with Hung’s other films, he forges a new dialogue of expression. This dialogue finds currency in Hung’s Third Cinema approach, an approach often homogenised with Third World Cinema yet different in discourse. Third Cinema rejects binarisms such as mainstream versus alternative and endorses a hybrid approach, centring on life experimentalism. It is linked to history and culture and concerned with the relationship between social practice and cultural existence, its aim being to intervene within these layers. Within this scheme, the present moment is always evolving and as a result, cannot be represented but only experienced. It is Hung’s vocabulary for this moment of experience that results in the visceral and imagistic cinema that he conceives. The Vertical Ray of the Sun may not have the same political, social and theoretical implications of Cyclo, yet it still adheres to a process of intervention whereby nothing is expressed in terms of totality. Within his latest feature, each character oscillates between differing positions yet none of their experiences are articulated in moralistic terms. No relationship is found to be perfect or flawless, rather it is the complexity of each human relationship that ultimately defines them.

The newest edition to his film oeuvre, The Vertical Ray of the Sun retains the same poetic tendencies of Hung’s other films, yet it is also very different. It does not depict the master-servant or employer-employee relationship that pervades Scent of the Green Papaya and Cyclo, nor does it contain any kind of political innuendo. Whilst Cyclo presents the urban decay of modern day Ho Chi Minh City and the hardship and pain of its inhabitants, The Vertical Ray of the Sun depicts a financially comfortable family living a bohemian-like lifestyle in a ravishingly beautiful contemporary Hanoi. Nevertheless, a central theme running through all of Hung’s films is the notion of the infinity of family and the cycle of history. The protagonists in his films are part of a greater scheme in which they attempt to find unity between the past and the present. If Cyclo is concerned with patriarchy, the central character of Cyclo trying to reach peace with his own father who was also a struggling cyclo driver, then The Vertical Ray of the Sun is more concerned with the female position. While Khan tells her husband Kien that she is expecting their first child, Lien fantasises about being pregnant in front of mirrors, the cycle of life continuing. The sisters follow tradition in celebrating the day of the death of their parents, and by meeting at Suong’s Café to pray, prepare the memorial banquet and welcome family members. Their sense of familial loyalty and support translates the film into a meditation on love, marriage and family.

Visually, Vertical Ray‘s rich and absorbing colours, transforms rain, water and the natural environment into a stunning canvas. Close-ups of the character’s faces are striking because they are not common in every scene and appear highlighted against the more image-oriented sequences. The human component of the film is matched by the luscious setting of Vietnam. Hung proposes a meditative experience, immersing the spectator in a lush and atmospheric environment where the sensual rhythm of everyday life is shared with the sound of buzzing insects and the falling of rain. Poetic energy combined with a unique sound and image alliance work together to create an illustrious audio-visual sphere in which the characters commute. Notably, Hung’s Vietnamese and French heritage gives him the vantage point of both insider and outsider. He is able to reach a platform where the juxtaposition of interior shots and the natural environment of Hanoi are not jarring or too contrived. Hung’s vivid imagery of colours and emotions sees life and art co-existing. The everyday is not exempt from artistic evaluation, nor does this artistry take away the life and vibrancy of the characters and ultimately favour an aloof mode of thought. Hung reaches a plateau where his expressionistic aesthetic and formalism grants the non-linear narrative avenues of divergence. These divergences are what provide the film with its intoxicating opulence and makes it a cinema of feeling, as much as seeing and hearing. At the end of the film, the spectator realises that they have spent a month in the life of a regular Vietnamese family, sharing in the simplicity of daily routine but also experiencing the intimate unrest and tender emotions that lie within.