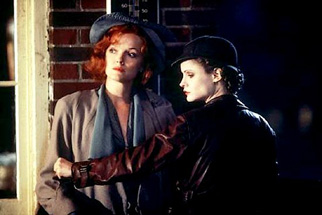 Kansas City is a period recreation film, a version of Kansas City, Missouri in 1934 that is grim, nasty and nostalgic. Like other Robert Altman films, it is not simple; unlike his other films, it is a musical of sorts. Because Altman was born and raised in Kansas City, the film is sometimes seen as a sort of personal memory work looking back over a remarkable time: in 1934, Kansas City was the hub city of the large southwest region, like Chicago to the north, a national railroad interchange; the centre of a growing jazz movement, sending bands on tour from Texas to California to the Dakotas. Unlike nearly every other city in the country, in 1934 – one of the worst years of the great economic Depression – Kansas City was prosperous: it was in the hands of a canny political boss, Tom Pendergast, who finessed a political coalition of Anglo business and civic interests, Italian – read “Mafia” – newcomers, and a large black community. The Pendergast machine (which launched the career of President-to-be Harry S. Truman) achieved this by running (often ruthlessly) an open city: gambling, liquor, prostitution, whatever people wanted and would pay for was available around the clock. During the 1920s and 1930s, the larger southwest region produced a disproportionately high number of top professional jazz players and orchestras who knew that if times got tough, they could always get a job in Kansas City (1). Altman is at pains throughout the film to gently but constantly remind us of these things.

Kansas City is one of Altman’s multi-track story specials, like Nashville (1975) and Short Cuts (1993). The film takes place in not much more than a day and a night. There is some sequence scrambling in the first few scenes of the film, after which it settles down to chronological continuity. Blondie O’Hara (Jennifer Jason Leigh) kidnaps the rich, drug-addicted wife, Carolyn (Miranda Richardson), of a politically powerful advisor to President Roosevelt’s brain trust, Henry Stilton (Michael Murphy), clearly a big cheese. Blondie does this for leverage, to buy back her husband, Johnny (Dermot Mulroney), a petty crim who robbed a client of the black crime boss Seldom Seen (Harry Belafonte), the Dr. Mabuse of Kansas City – he knows everything that is going on. Seldom captures Johnny. Blondie wants to trade hostages. A young country black girl, come to the city to live in a home for underage pregnant girls, is lost in the city and taken home by young Charlie Parker, whose mother, Addie, works with Blondie at the Western Union. Henry Stilton activates the extensive political and criminal infrastructure of the city to get his wife back (you may be happy to learn that he does; very little about the outcomes of these people, however, is happy).

For Altman, Kansas City can only be a memory film in the most general and received way: born in 1925, he would have been nine years old in 1934 and could hardly have directly participated in the situations he depicts. It is a dream film, a dream of a very recent past for him, a part of his city’s life that he just missed, that he kept hearing about, that had turned itself into myth and overtaken him before he was out of high-school (the film includes actors playing real people – boss Pendergast, for instance – and musicians stipulated as playing real ones – Count Basie – as well as standing in for key figures without direct identification in the film – Lester Young, Coleman Hawkins, Mary Lou Williams, Jimmy Rushing. One of the named characters in the film is the future bop virtuoso Charlie Parker, played as a 14-year-old high-school boy, innocently-avidly drinking it all in with his alto always hung around his neck, one of Altman’s wish-fulfilment figures in the film).

Cultural time. Altman’s dreaming of his film’s moment is sprinkled with references and allusions to that time, building up an impasto of 1934ness. But his dreaming isn’t locked in 1934, it only starts there. His historical media bric-a-brac were around in 1934, but almost all of them were only just beginning then, to go on to much longer careers through the rest of the ’30s and into the next decades. Combined they offer a selection of material from radio, movies, comic strips, painting, to gladden the heart of pop culture pioneer Gilbert Seldes (the movie doesn’t mention him): Tarzan, Amos “n” Andy, Blondie (the comic strip/the character name), Mantan Moreland, Edward Hopper (a visual reference), Clark Gable and Jean Harlow in Hold Your Man (Blondie models herself on tough, early 1930s movie women and wants to be seen as Jean Harlow; throughout the film, as a perverse, insider gesture, Altman has her purse and twist her lips so that she looks like a character in Geo. McManus’ hit comic strip of the time, Bringing Up Father, a.k.a. Jiggs and Maggie). And of course the musicians: Charlie Parker still a kid, Count Basie yet to be discovered via the Club Reno radio remotes, Lester Young a star to come.

These sorts of things are what half the movie is about. The other half is a dream memory of Kansas City jazz. The philosophic, vicious monologist gangster Seldom Seen runs a club in which his space for crime business is contiguous with the musicians’ performance space, and it is his indulgence to have the musicians playing 24 hours a day for his pleasure (like Duke Ellington keeping his orchestra together when it wasn’t profitable). The jazz creeps into the film bit by bit. The music numbers get longer. The music intrudes itself into the other scenes. The music becomes its own story as some of the best jazz musicians of the 1990s play in period costume their version of music 60 years old. And like another film with two very different, parallel realities, Shinoda’s Demon Pond (1979), at the end one reality prevails and the other disappears. At the end of this film, there is only the music.