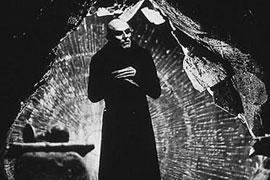 A frequently mentioned subtext in vampire movies is that of the vampire as homosexual. Occasionally the theme is covert as in the many adaptations of Sheridan Le Fanu’s lesbian vampire story Carmilla including such diverse titles as Hammer’s exploitation, The Vampire Lovers (1970) with its graphic lesbian and heterosexual sex scenes, Roger Vadim’s soft porn art house Blood and Roses (1960) and Carl Dreyer’s masterly Vampyr (1931) in which Dreyer only draws the central premise from Le Fanu of the female vampire and her female victims. In most, more conventional vampire films this subtext can easily be missed, however, a comparison of one scene in Tod Browning’s Dracula (1931) with the simultaneously produced Spanish Dracula (1931) directed by George Melford, is illuminating. In the English language version, the real estate agent Renfield, soon to be transformed into a fly devouring lackey, is set upon by three female vampires; at the last moment, Dracula, personified by Bela Lugosi, repels the women in order to feast on the young man’s jugular/carotid. The Spanish version is slightly different, here the female vampires feed on Renfield and Dracula doesn’t partake in the feast. This can be seen as a concession to Latin-American machismo sensibilities. Better a male character succumbs to three women than there be a hint of homosexuality.

Murnau’s Nosferatu (1929), taking its title from the Rumanian word for the undead, has frequently been interpreted as having a gay subtext, not least because its director was bisexual in a rigorously heterosexual Germany of the 1910s and early 1920s. Stan Brakhage goes so far as to suggest that the film was a deliberate exercise in camp (1), and while Stoker’s novel is built upon necrophilia, sadomasochism and sexual ambiguity, it is difficult to sustain this reading for Nosferatu without imposing Murnau’s sexuality onto the film. Here, the nosferatu’s object of desire is resolutely and unambiguously Harker’s wife Mina. In E. Elias Merhige’s Shadow of a Vampire (2000), Max Schreck, the vampire, (played by Willem Dafoe) is similarly obsessed with the actress Greta Schröder (Catherine McCormack) who is portraying Mina, yet only brief mention is made of Murnau’s sexuality. When Murnau goes out partying after a day’s filming in Berlin, a comment is made about Murnau’s attempts to pick up a woman… or maybe a man. A good opportunity to examine the ambiguous sexuality of vampirism, especially the link to bisexuality has been missed. Perhaps, once again, the filmmakers felt that homosexuality was too difficult a subject to tackle in their film, however, the flier produced to promote the film includes the salacious details of Murnau’s death as recounted by Kenneth Anger in his book Hollywood Babylon. (2)

Shadow of the Vampire is a fictionalised account of the making of film director F. W. Murnau’s Nosferatu and has as its central conceit that Max Schreck, the actor who played the vampire, was a real vampire. The film stays fairly close to the actual details of the making of the film, using the characters’ real names and remaining relatively faithful in its recreation of scenes from Nosferatu, as well as incorporating (poor quality) footage from the original film. The idea that Max Schreck was a vampire is not new, dating back to at least 1953 when filmmaker and critic Ado Kyrou suggested, “In the role of the vampire the credits name the music-hall actor Max Schreck, but it is well known that this attribution is a deliberate cover-up… Who hides behind the character of Nosferatu? Maybe a nosferatu himself?” (3) This was reiterated by Jean-André Fieschi in 1980 when he mischievously stated, “There was, for instance, the somewhat shopworn mystery of who played Nosferatu. That fantastic make-up supposedly masked the features of an unidentified actor, of Murnau himself, or indeed of nosferatu in person”. (4) This makes great copy, especially for a surrealist like Kyrou, but, we know that Max Schreck was a real person. He had begun his acting career at Max Reinhardt’s Berlin Staatstheater, as did Murnau, and later appeared in approximately twenty movies including Murnau’s silent The Grand Duke’s Finances (1923) made a couple of years after Nosferatu and several sound films including Max Ophüls’ The Bartered Bride (1932) (5).

Murnau’s Nosferatu was made during turbulent times, yet Shadow of the Vampire‘s view of the world is very myopic. The First World War had had a devastating effect upon a country in transition. By 1920 the Weimar Republic was an explosive melting pot of political extremism, rampant inflation, rigid authoritarianism and moral and social decay. Shadow of the Vampire makes no reference to this. Stoker’s novel was contemporaneous, the late 1890s and hence invoked the spectre of Jack the Ripper who operated in the late 1880s. The scriptwriter of Nosferatu, Henrick Galeen, relocated his film to Wisborg, 1843, to the time of the plague, and Murnau created a film that had an antiquated gloss and tone even on its original release, but, Galeen’s concept of the vampire as the contagion of an epidemic that spread throughout Europe created a strong metaphor for contemporary audiences with the virulent Spanish Flu outbreak of 1919 which spread across the world in three months (in a time before commercial air travel), killing between twenty five and forty million people, two to three times the nine million killed during The Great War. Max Schreck’s emaciated rat-like features and his sharpened incisors create the perfect visual to propagate Galeen’s theme. (6) In Shadow of the Vampire Willem Dafoe’s vampire has blunted, rabbit like teeth. This has the odd effect of partially neutralising Dafoe’s excellent performance, creating a character who is Bugs Bunny-like, capable of partaking in comic one-liners. “I don’t think we need the script writer any longer”, insinuates Dafoe looking for a victim. John Malkovich as Murnau replies, “I am loath to admit it, but the writer is important.”

Murnau’s nosferatu is a rat-like creature. He may be a vampire and although there is a creature known as a vampire bat, erroneously reputed to suck blood, no reference is made in Murnau’s film to bats. The word vampire has its origins in a Turkish word for witch. Unlike Browning’s Dracula and the Hammer Draculas, Murnau’s creature is not capable of transforming into a bat. In Shadow of the Vampire Dafoe doesn’t transform into a bat, but at the abrupt conclusion of his central speech on the existential angst of being a vampire, he does snack on a passing bat, drawing the link between himself and bats. Werner Herzog also features bats in his 1980 remake of Nosferatu. Again there is no transformation, and the slow motion, black and white documentary footage serves a similar role as the illustrated lecture Dr. Van Helsing gives to his students on “vampires” of the natural world in Murnau’s original. They both draw the connection between vampires and the fruit eating bats.

Merhige’s film is more interested in conveying an obsessive struggle for an artistic vision at any cost. Murnau is portrayed as a Mephistopheles who will pay any price to create his masterpiece, including the death of his cast and crew. The vampire appears as a haunted, weak individual, interested only in his own survival and feasting on the gourmet delights of the actress Greta Schröder. It is only at the conclusion of the film, when his life is seriously threatened that the vampire unleashes his awesome powers.

As hinted above, Shadow of the Vampire takes some poetic licence. Film stocks of the silent era were incapable of filming at night. Not only was this technically impossible, but Murnau’s film was shot under the midday sun to reduce the shadows cast. The nighttime scenes were later tinted blue (as was the convention during the silent era) to differentiate them from the daylight scenes. Obviously, for reasons of vampire logic, Merhige’s vampire cannot be filmed during the daylight hours and so must be filmed after dark and without the aid of artificial lighting. At the conclusion of Merhige’s film several of the crew are killed by the vampire and eventually Schreck himself is destroyed. In actual fact, both Schreck, as already noted, and cinematographer Fritz Arno Wagner continued to make films after Nosferatu was completed, with Wagner filming, amongst many others, M, The Threepenny Opera, and Kameradschaft (all 1931!).

One difference Merhige’s film has to Murnau’s is during the filming of the vampire’s death scene. In Murnau’s film the vampire is killed by the first rays of the morning sun. This was the first time a vampire had ever been killed in this manner, an historic first. Yet in Merhige’s recreation of the scene, a stake is used and is clearly seen prior to the vampire’s death on Mina’s bed.

Merhige’s ‘art-house’ film, dealing with the production of Nosferatu, deals with neither its filmmaking elements nor its vampire myth adequately. It simply regurgitates the junk concept that Schreck was a vampire and uses some throwaway lines on the existential angst of a vampire (again, not a new idea, with the ultimate expression of this being in George A. Romero’s Martin [1976]) and the driven artist. Much of inherent interest in the history of the making of Nosferatu is not mentioned, not least, Florence Stoker’s, wife and heir of Bram’s estate, pertinacious fight to preserve her rights to the novel culminating in the wilful destruction of Nosferatu‘s original negative. Also, Albin Grau, an ardent spiritualist, and Nosferatu‘s producer, storyboard artist and set designer, formulated the link between cinema’s projection of light and the vampire’s telepathic/hypnotic powers. Both The Cinema and Stoker’s Dracula were born in the same year as each other, and the cinema transfixes the viewer similarly to the hypnotic gaze Dracula casts on his victims. This is succinctly illustrated in a production sketch by Grau reproduced in Hollywood Gothic (7). Shadow of the Vampire briefly alludes to this connection, “A theatrical audience gives me life,” says Greta Schröder pointing to the camera, “This thing merely takes it from me.” Bram Stoker’s Dracula (Francis Ford Coppola, 1992) more comprehensively charts the complex parallel between the cinema and vampirism, drawing upon Coppola’s interest in early cinema.

Shadow of the Vampire is neither profound nor complex. It is telling that one needs only look to the more mainstream Dracula 2000 (Patrick Lussier, 2000) to see a more rigorous and entertaining work, that references, amongst many others, Murnau’s Nosferatu, Browning’s Dracula and Fritz Lang’s House By the River (1950) with an intelligent understanding of Stoker’s novel, but that is another story.