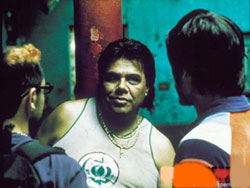 From its gripping opening sequence, a frenetic car chase through an apocalyptic Mexico City, to its final image of man and dog setting off into a vast and empty landscape, Amores Perros strikes like a bullet in the gut – wincing pain giving way to prolonged, dreadful suffering and, a great deal of blood later, finally reaching a surprisingly serene end. First-time feature director Alejandro González Iñárritu delivers a sobering, epochal meditation on the dog-eat-dog modern world, vis-à-vis a trendy intersecting narrative set amidst the luxury and squalor that uncomfortably rub shoulders in the world’s most crowded city. It’s Magnolia south of the border, with a grimly realistic car crash taking the place of biblical plague as denouement.

Octavio (Gael Garcia Bernal) is an audacious, soulful young man who carries a torch for his battered sister-in-law Susana (Vanessa Bauche). In a desperate attempt to rescue her and flee oppressive barrio life, Octavio offers up his rottweiler to the barbarous world of back alley dogfights. Across town but a world away, wealthy middle-aged executive Daniel (Alvaro Guerrero) deserts his family for supermodel Valeria (Goya Toledo), only to have her looks and career shattered in a sudden accident (the aforementioned car crash). Furthering their torment, Valeria’s precious pooch becomes trapped beneath the floorboards of their apartment. Rounding out the triptych is El Chivo (Emilio Echevarria), an older street person and former communist guerrilla who left his own family long ago. Recently released from prison, he attends to a pack of stray dogs and works reluctantly as a hired killer for the same cop who put him away.

The frantic pace, skewed time structure and plenteous blood-letting will invite misleading comparisons to Tarantino, the grave distinction being that Iñárritu does not go in for stylized violence. His depiction of the urban jungle is not about hip gunplay and even hipper wordplay, and he lingers on shots of charred bullet entry holes in a decidedly un-sexy manner. Rather, Amores Perros concerns itself with the everyday navigation of life’s traps, those which lay in wait with jaws poised to irrevocably alter our false sense of security in one fateful instant. If misfortune clamps down with steel teeth, escape may require chewing off a foot.

Like my own, Iñárritu’s metaphors are heavy-handed at times and not wholly original, though through utter conviction he manages on the whole to make them resonate. As in the case of man’s best friend, who figures predominantly (and harrowingly – a disclaimer vows that no dogs were hurt during the production, but it looks awfully real enough) in the film’s examination of humans’ beastly capabilities. “Masters take after their dogs,” a character remarks, an axiom that does not refer only to physical resemblance. Humans are just another domesticated breed, and like dogs are capable of kindness and loyalty as long as our needs are met. Take away those creature comforts, and we’ll do whatever is necessary to survive. The film makes little exception for family; rather, the characters’ most malevolent acts are inflicted upon their own. Moreover, we can exhibit compassion and cruelty at once, as in a scene where Octavio lovingly bathes his dog before sending him into the ring. The film’s dire realization being – man is capable of even greater viciousness than dogs; we’ll even kill for money. This, the film imparts, is the true moment of trial. Is someone who is taught cruelty – forced to accept cruelty in order to survive – to be blamed for exacting that cruelty?

The performances are unpretentious and uniformly excellent, though Bernal and Echevarria are given the most to do and are the clear standouts. Cinematographer Rodrigo Prieto keeps his camera close to the actors, seemingly to hone in on the range of raw emotion conveyed in their expressions – years of regret and defeat deeply etched in El Chivo’s visage, Susana’s perpetually terrified vulnerability, and Octavio’s physical transformation from baby-faced to gaunt as he realizes what he (and others) is capable of. Life afflicts physical scars – bruises, gunshot wounds, amputations. Similarly, the city shows its disfigurement – walls are loose and crumbling, rotten floorboards disintegrate underfoot. Even the film’s bold palette of colors appears faded, sun-bleached in the same deteriorated hues that so beautifully suffused last year’s Three Kings (David O. Russell, 1999).

Nominated for an Academy Award for Best Foreign Film and (somewhat over enthusiastically) hailed by the New York Times‘ Elvis Mitchell as “one of the first art films to come out of Mexico since Buñuel worked there,” Amores Perros seems to be the delegate-elect for a new Mexican cinema. And yet, an epic scope, ensemble cast and melodramatic sensibility alone do not make a masterpiece. Ultimately, though it demonstrates far more than a glimmer of potential talent, Amores Perros falls short of what it endeavors to be. Iñárritu makes the classic first-timer mistake of striving for too much, attempting both depth and style and coming off slightly hackneyed and derivative. Several ill-advised intervals find Iñárritu galloping to catch up to his own structural complexities by inserting expository montage sequences that, clumsy and soundtrack-heavy, too closely resemble music videos. Attempts to interweave characters among the three segments seems forced, as the links tying them together are indirect and metaphorical – thus, there’s no satisfying a-ha of recognition à la Pulp Fiction as disparate parts are finally revealed as a cohesive, cleverly staged whole.

The segment with the scarred supermodel is the weakest of the three, in that we’re never allowed as close to these characters, thus restraining their dimensions and our own sympathies. Yet the metaphor of the trapped dog, whose tortured cries they can hear all around but who maddeningly continues to elude them, is gravely apt. The people of Amores Perros are searching, attempting Herculean efforts to achieve what seems just around the corner. They are thwarted by a world that swiftly and unexpectedly asserts its force, like a bully pulling a gun, and instantly the rules are meaningless and nothing’s fair. It’s a cynical message but one not totally without hope. As El Chivo’s ascent from angel of death to gallant savior shows, reconciliation and redemption still seem possible.