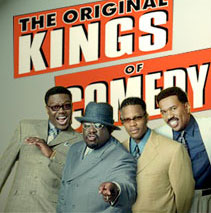 Spike Lee has never been a lyrical filmmaker. His best work (Jungle Fever [1991], Do the Right Thing [1989]) contains the vibrant rough-hewn energy of an angry young artist working close to familiar material. However, Lee’s latest effort The Original Kings of Comedy shows up a director caught now in-between-stages of a career that fast approaches nearly two decades. In the past, Lee has proved more adept at capturing the raw-nerved act of a chair being hurled through a shop front window than his later ponderous conceits, such as the clumsy metaphoric camera descending into a vacuous elevator shaft in Girl 6 [1996]. His latest film is a departure from both the early urban obstinacy of his narratives and an occasional penchant for the symbolic mainstream-message movie (Clockers [1995], He Got Game [1998]).

The Original Kings of Comedy showcases the final nights of the most successful American comedy tour in history. After traversing North America, popular comedians Steve Harvey, Cedric The Entertainer, Bernie Mac and D.L. Hughley return to The Charlotte Coliseum, North Carolina to deliver their final performance. The material is very funny. Nothing is hedged. The quips and anecdotes are fast, while the physicality is measured. Moreover, the brevity of each act is endearing (especially Harvey) where ideas are often executed with a stylish Mort Sahl economy. As they cruise about the stage individually, each (in his allotted twenty minutes) intertwines a unique proletarian Afro-American experience with an endearing and self-effacing cultural wisdom that is rarely malefic or ostracising. They ponder and assert a variety of rehearsed and off-the-cuff observations, from Harvey announcing: “If you’ve never had your ass in love you missed the whole ship”, to topical transmutations: Old School versus Hip Hop, Black responsiveness to danger, Grandmothers and music. Harvey knocks hip hop, preferring Old School R&B and does some endearing Platters hop-stepping, while Cedric the Entertainer demonstrates the importance of music when driving a car to Mars and D.L. Hughley gives out some invaluable advice for dealing with creditors. Best of all is Bernie Mac who explodes like a powder keg on stage, jack-hammering his experiences of surrogate child rearing, sexual debauchery and the semantic use of the word ‘motherfucker’ in a street corner conversation between ‘brothas’. Mac functions like the perfect mouthpiece for Lee. His ability to manipulate bad taste gags and threadbare set-ups into ribald, self-righteous parodies of hysterical magnitude compliment Lee’s somewhat tacit (and amusing) misogyny. (Imagine what Mac could have done with all that laboured material in Girl 6). Meanwhile, an elaborate set-up involving ten or more cameras captures little more than the proscenium experience.

Shot on digital video, Lee’s roving toys buzz around the auditorium like out takes from the set of Solid Gold, with the movie bathed in cheap pasty velour and buried in MTV aesthetics. Each of Lee’s set-ups lacks spontaneity, the shots chosen with the dull precision of a hurried technician working the mixing desk for a sports broadcast. There is minimal behind-the-scenes footage inserted most likely to break up the open plan of the live atmosphere and to perhaps induce some sort of resemblance with a documentary (rather than the extended TV show it actually is). Here Lee extricates himself from the proscenium confines but fails to expand upon this provision, giving insufficient insight into his quartet of performers (in one scene they mumble through a game of poker, enclosed, road-lagged and battle weary). Indeed Harvey, Hughley, Cedric and Mac move in and out of harmony like a Mingus horn section. The rapid-fire assemblage of ideas and jazz-like riffs allows for an interesting on-stage dynamic. Unfortunately while they solo around host Harvey (a brazen tenor sax), Lee, the conductor doesn’t know how to cope. It appears in his own film that he has little to do with the orchestration other than some brief sidesteps backstage (a galvanising shot of a nervous Hughley waiting to go on) and an unabridged epilogue of the comedians hangin’ on a basketball court. There is little boldness for intricate visuals, narrative experimentation or political circumference. Lee seems to have resisted any urge to impose anything new or liberating other than a loose framing (de)composing each of the performers in flat non-threatening squares within squares. At times the movie seems to be about Spike Lee’s lack of imposition. His presence (or lack of it) is more like a construction site foreman rather than a filmmaker, deploying his array of cameras, then retiring to the cutting room while the film gets made by others.

The Original Kings of Comedy has already been compared to (the overrated) Richard Pryor: Live on Sunset Strip (Joe Layton, 1982). (Does anyone remember the landmark Richard Pryor: Live in Concert? [Jeff Margolis, 1979]). Both these films have a cutesy coercion asking the viewer to submit to an onstage self-satisfaction, which is mildly infectious and persistently glib. Lee often renders some of the weaker gags with a get-of-jail jejuneness, cutting from a fleetingly irresolute performer to a ready-to-be-pleased face in the crowd, while onstage the comedian removes his mugging death mask.

When the audience isn’t being used as a perfunctory evocation of the live process, Lee does find some striking images. There is a nice shot of contrast, capturing a black woman in the audience doubled over in hysterics, while behind her at the edge of frame sits the unamused glare of an alabaster female face. Unfortunately this remains one of the few remnants of cultural dissection. Lee also orchestrates some magnificent horizontal sweeps at the apron of the stage but as they become more repetitious, they are rendered bereft of the grandeur initially achieved. Barely into the third act it becomes apparent that this movie has already run out of tricks.

This is a Spike Lee Joint in desperate need of a spark. The gags may transcend race, class, gender and age but as moviemaking it has the dull bleeding effect of a washed out neon sign, fading quickly into the distance.

Having been criticised in the past as heavy-handed in style and authorship, Lee’s invisibility either before or behind the camera now only further diminishes a once distinctive voice lost somewhere between youthful zeal and ponderous pretensions. As a cinematic experience, The Original Kings of Comedy falls short on ambition or aesthetic. Whether a throwaway side project, a laboured passion or Lee’s misguided attempt at re-invention, it seems he has either run out of road on one journey or made a shaky start to the next.